As Tropical Storm Karl continued to churn over the southwestern Gulf of Mexico on Thursday, a tropical storm warning was issued for parts of the Bay of Campeche coast by the Mexican government.

Karl formed in the Bay of Campeche at roughly 4 p.m. CDT Tuesday and, as of 10 a.m. CDT Thursday was located about 245 miles (390 km) north of the port city of Coatzacoalcos, Mexico. Maximum sustained winds were 50 mph (85 km/h). Karl was drifting to the southeast at 5 mph (7 km/h) with tropical-storm-force winds extending outward up to 80 miles (130 km) from the center of the storm.

AccuWeather meteorologists expect Karl to move toward the south and make landfall along the south-central coast of Mexico early Saturday. The main impacts in the region will be associated with torrential rain, gusty winds and dangerous surf.

AccuWeather forecasters have rated Karl as less than one on the company’s RealImpact™ Scale for Hurricanes in Mexico. 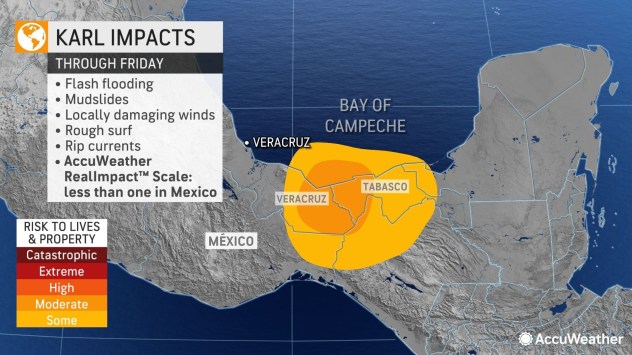 Karl is the 11th named storm of the Atlantic hurricane season.

As Hurricane Julia was closing in on Central America late last week, AccuWeather meteorologists warned that leftover energy from Julia could lead to the formation of Karl in the southwestern Gulf of Mexico as well as another tropical storm off the Pacific coast of Mexico. On Monday, Julia became the second tropical storm of the season to survive the trip from the Atlantic to the Pacific Ocean — the first time on record that two storms have crossed over in one season. The first storm was Bonnie which traveled from the Atlantic to the Pacific from late June into early July.

Julia became a tropical rainstorm on Monday and has since dissipated.

The southwestern Gulf of Mexico system is an area where Karl could gain some additional strength in the short term, forecasters warn. 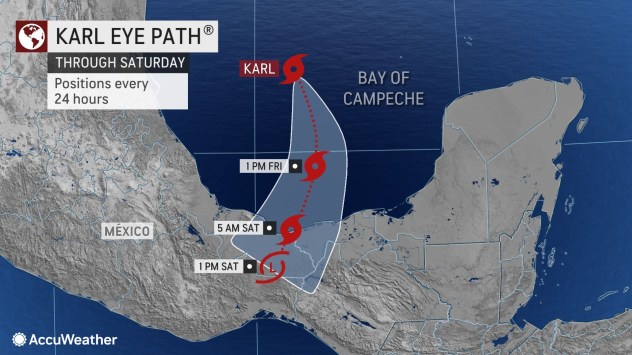 "There is also a bubble of high pressure in the upper portion of the atmosphere right over the top of the zone, which could allow more thunderstorms to erupt and strengthen into Thursday," AccuWeather Chief On-Air Meteorologist Bernie Rayno said.

Water temperatures are another key to tropical development in this area.

Meteorologists don't just look at surface water temperatures, they also study the water temperatures farther down in the ocean when determining whether a system will strengthen or not. Water temperatures of about 78 degrees Fahrenheit (25.6 degrees Celsius) or greater are needed to foster development and sustain a tropical system.

"Surface water temperatures are well into the 80s F (27-31 C) throughout the Gulf of Mexico, and that will help with development in the short term," AccuWeather Meteorologist Alex DaSilva said. "However, deep down, water temperatures are in the lower 70s (21-23 C) and could percolate toward the surface due to upwelling soon after a storm forms and begins to agitate seas." 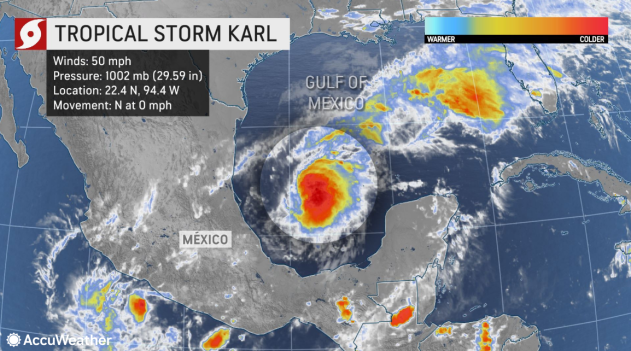 This image, captured at 5 a.m on Thursday, Oct. 13, 2022, shows Tropical Storm Karl (center) over the southwestern Gulf of Mexico. A batch of thunderstorms (lower left) remained active and could evolve into another tropical system over the eastern Pacific.

Winds surrounding Karl's circulation are another factor for strengthening versus weakening.

Light winds in the region allowed Karl to form on Tuesday. When winds are light outside of the targeted development zone, storms can have an easier time organizing.

Some stiff breezes, known as wind shear, were beginning to affect Karl on Wednesday by causing most of the thunderstorms to be pushed to the east of the center of circulation. Strong wind shear usually disrupts the circulation of brewing or established tropical systems and can often lead to their demise.

Toward the end of the week, wind shear is forecast to increase further throughout the region as a cold front drops southward into the Gulf of Mexico. 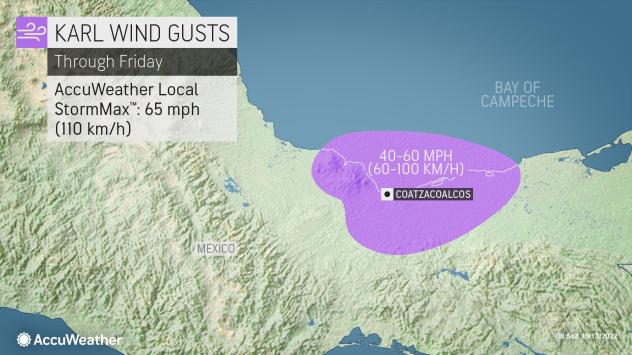 Because of the limiting effects of wind shear, sustained winds associated with Karl are expected to peak between 40 and 60 mph (60 and 100 km/h) near the Mexico coast. Winds are forecast to decrease prior to landfall on Friday and diminish rapidly once the storm moves inland this weekend. Winds this strong can still lead to sporadic power outages and cause minor property damage.

Still, Karl will bring torrential rainfall to portions of Mexico, where forecasters are projecting that 4-8 inches (100-200 mm) of rain will fall through Friday. Rainfall of this magnitude with an AccuWeather Local StormMax™ of 14 inches (360 mm) is more than enough to trigger life-threatening flash flooding and mudslides. 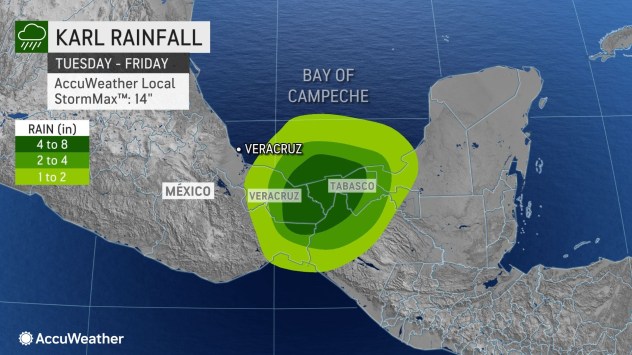 Even as Karl's winds weaken beyond tropical depression status early this weekend, flooding downpours may persist in part of Mexico with the system as a tropical rainstorm.

The feature will not be a direct threat to the United States due to an anticipated southward turn. However, people throughout Mexico's Gulf coast should watch Karl closely because forecasters note that steering breezes sometimes can change over time and can alter the path of the storm. Adverse and dangerous conditions will also extend well out from the point of landfall.

While increasing wind shear and upwelling could cause the system to diminish in place over the southwestern Gulf, the system could wander onshore in Mexico prior to any loss of wind intensity. In this case, torrential rain and gusty winds could pose a serious risk to lives and property in the region.

Due to Karl, seas will build in the southwestern Gulf of Mexico. Depending on how much strengthening occurs, seas and surf may then become more intense. Large swells may propagate outward to more of the western and central Gulf of Mexico, where petroleum rigs are located. These swells would then increase the intensity and frequency of rip currents along the Texas coast later this week.

There is some indication that leftover moisture could drift northward this weekend following a potential landfall in Mexico, according to AccuWeather Meteorologist Matt Benz.

"Non-tropical weather features in the western and central U.S. may help to draw the moisture northward and potentially enhance rainfall and thunderstorm activity from southeastern Texas to Louisiana and perhaps Arkansas from Sunday to Tuesday," Benz said. "The non-tropical systems alone could bring heavy enough rain to lead to localized flooding from New Mexico and Texas to Louisiana early next week."

Areas from central and northwestern Texas to the lower Mississippi Valley could use a thorough soaking. Soil conditions range from abnormally dry to exceptional drought, according to the latest United States Drought Monitor report.

With Karl taking shape in the southwestern Gulf this week and looking ahead elsewhere over the Atlantic, forecasters caution that hurricane season is not over and officially extends through Nov. 30. 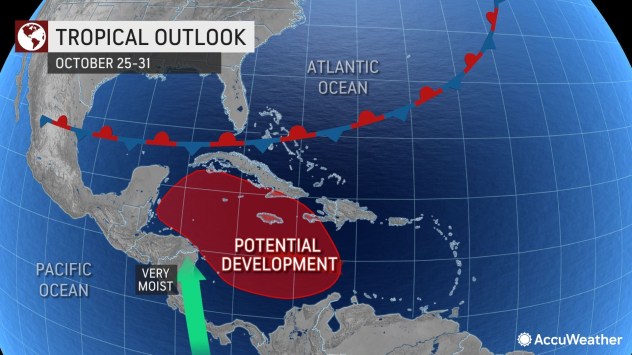 AccuWeather meteorologists will be watching the zone from the Caribbean to the north-central Atlantic during the latter part of October. At least part of this region is usually a hot spot for tropical activity during the latter portion of the hurricane season.

Wind shear is likely to be too strong to allow development from the Gulf to much of the Caribbean and southwestern Atlantic from later this week and into part of next week. However, wind shear may back off in this zone later in the month. Where moisture gathers, there is the potential for a tropical system to brew.

Long-range forecasters indicate that there continues to be some indication of a mid-ocean system that may form later this month over the north Atlantic, perhaps near the Azores as well.