A tropical rainstorm will bring gusty winds and flooding rain to northern South America late this week before it strengthens and takes aim at Central America this weekend.

AccuWeather forecasters are watching a tropical feature in the Caribbean Sea that is set to bring flooding rainfall and strong winds to parts of Central America and also potentially put a very unusual stamp in the history books.

The tropical rainstorm, designated as Potential Tropical Cyclone Two by the National Hurricane Center (NHC), is set to gain some organization and strength as it enters the warm waters of the southwestern Caribbean Sea. The system was forecast to become Tropical Storm Bonnie by the end of the week, but experts say the chances for it to become the first hurricane in the Atlantic this season are dwindling.

A satellite loop from June 30, 2022, shows a tropical rainstorm, designated by the National Hurricane Center as Potential Tropical Cyclone Two, churning just off the northern coast of Colombia.

As of 5 a.m. EDT Friday, the Caribbean rainstorm was located about 315 miles (505 km) to the east of Bluefields, Nicaragua, and was moving swiftly toward the west at 18 mph (30 km/h). Maximum sustained winds were near 40 mph (65 km/h). Tropical-storm-force winds extend outward up to 80 miles (130 km) from the center, according to the NHC.

"The rainstorm is expected to become better organized within the next 24 hours and become a tropical storm as it continues into the southwestern Caribbean," AccuWeather Senior Meteorologist Dan Pydynowski said. 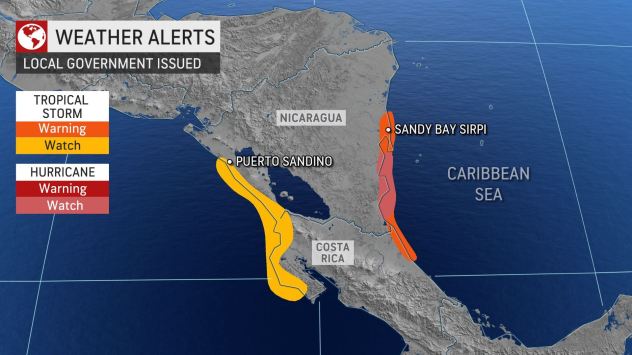 In order for the NHC to officially declare a tropical storm, the cyclone in question must have two factors present: sustained winds of 39 mph (63 km/h) or greater and a closed circulation.

The National Oceanic and Atmospheric Administration’s (NOAA) Hurricane Hunter aircraft began to investigate the storm early this week. These reconnaissance flights found the required wind speeds but still have yet to find a closed area of circulation within the system. 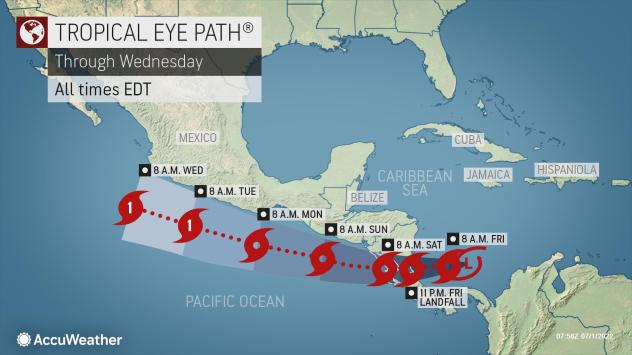 Forecasters say the reason the tropical rainstorm had not gained a name as of early Friday morning, despite producing tropical-storm-force winds, is that it was struggling to organize enough to develop a closed circulation.

"Since the early week, the system has been behaving like a strong tropical wave and not a tropical storm," AccuWeather Senior Meteorologist Alex Sosnowski said.

The tropical rainstorm's interaction with the northern coasts of South America at midweek did not do the system any favors in terms of organization either. Its appearance on satellite as of Thursday morning was described by some meteorologists as "ragged."

However, once it churns over open waters on Friday and begins to approach Central America, the storm will finally have a chance to come together.

Regardless of status, the storm will threaten parts of Central America with strong winds and flooding rainfall from Friday into Saturday. Portions of Nicaragua and Costa Rica will be the two areas at the greatest risk from this tropical threat.

The strongest winds from the storm are forecast to occur where the system makes landfall and along its direct path. Much of southern Nicaragua is expected to receive wind gusts on the order of 60-80 mph (100-130 km/h) late Friday into Saturday as the storm nears the coast. 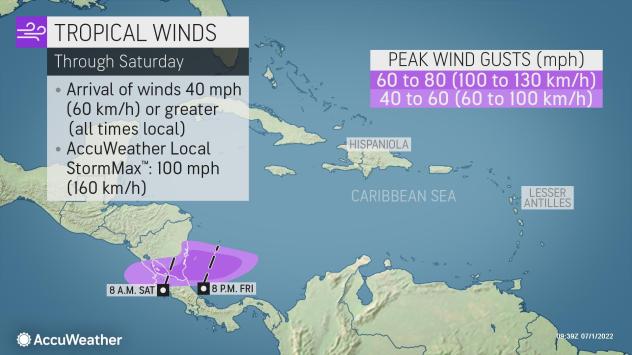 The heaviest rainfall of 8-12 inches (200-300 mm) is forecast to fall over a large portion of southern Nicaragua and northern Costa Rica, with an AccuWeather Local StormMax™ of 26 inches (660 mm). Even outside of the heaviest rainfall, widespread amounts of more than 2 inches (50 mm) of rain are expected across almost all of Nicaragua and Costa Rica.

Rainfall of any magnitude can cause major flooding issues if it comes down hard and fast enough. This scenario is exactly what forecasters are concerned about for the region.

Flash flooding is likely across the area, and torrential rain can quickly lead to mudslides, especially in the region's elevated terrain. 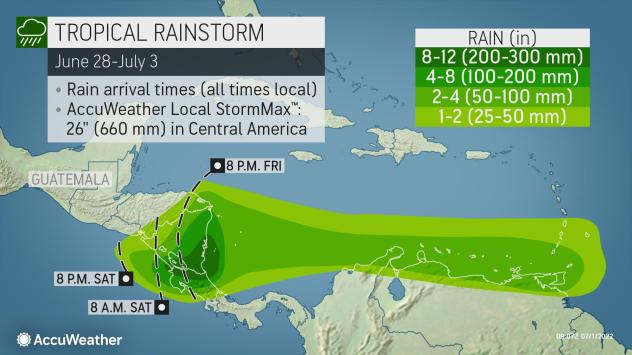 "While rainfall is expected to be excessive and the likelihood of flash flooding and mudslides is high, the fast forward motion of the storm should limit the duration of the rainfall and strongest winds to 24 hours or less in Nicaragua and Costa Rica," Sosnowski explained.

Matters could be made much worse if the storm were moving at a slower speed or were to stall out and unleash round after round of torrential rainfall over the same areas, Sosnowski added.

This tropical rainstorm has been rated a 1 on the AccuWeather RealImpact™ Scale for Hurricanes in Central America due largely to the anticipated flooding rainfall.

The rainstorm has already proved disruptive on its journey so far. The government of Venezuela on Wednesday closed schools and opened shelters while also limited air and ground transportation due to the threat of heavy rain, The Associated Press reported.

The island of Curacao ordered businesses to close and imposed a curfew that began late Wednesday morning, the AP reported. Power outages were reported in Trinidad & Tobago earlier this week due to the storm's passage. 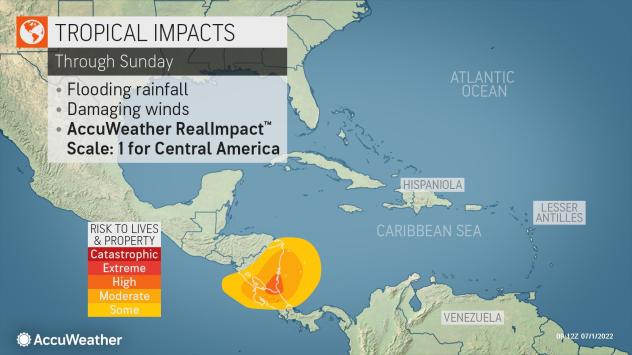 After moving through Nicaragua and Costa Rica at the end of the week, the storm is expected to emerge into the eastern Pacific this weekend, likely sometime Saturday.

Central America was badly impacted by two major hurricanes at the end of the historic 2020 Atlantic hurricane season. Hurricane Eta struck northeastern Nicaragua as a Category 4 storm on Nov. 3 and was blamed for at least 165 deaths in Central America.

Just about two weeks later, Hurricane Iota barreled into the coast of Nicaragua as a Category 4 storm on Nov. 16. Iota was blamed for at least 84 deaths across Central America, and the NHC estimated that the storm impacted 7 million people across the Caribbean and Central America.

AccuWeather forecasters say this type of development and storm track are highly unusual at this point in hurricane season.

"Usually, storms moving into southern Mexico or Central America are shredded by the higher terrain of the area and do not cross into the East Pacific," Pydynowski explained. "However, this storm is tracking so far south that it could accomplish this rare feat since it is forecast to travel over the narrower part of Central America with less terrain overall."

Should the system earn the name Bonnie before it slams into Central America, it will retain the name once it emerges in the East Pacific this weekend.

Conditions in the East Pacific are currently conducive for development, meaning that once the storm is able to cross into the basin, it will be able to regain strength. It is even forecast to become even stronger than its strongest level in the Atlantic basin and become a hurricane early next week.

The East Pacific basin has already had two hurricanes roar to life south of Mexico this season: Agatha and Blas.

As the tropical rainstorm was passing just north of South America earlier this week, it came close to making history. A tropical cyclone passing this far south as this tropical rainstorm did is extremely rare in June and is somewhat more typical during September and October.

"During June, there has never been a named tropical system in more than 150 years of records near the coast of South America during La Niña conditions," AccuWeather Senior Meteorologist John Feerick said. During a La Niña, cool waters over the eastern part of the tropical Pacific tend to alter weather patterns and knock down wind shear over much of the Atlantic basin. This tends to assist with tropical storm development over the Atlantic.

Since the record-keeping of Atlantic tropical systems began in the mid-1800s, only 25 storms have passed within 50 nautical miles of Aruba, according to data from NOAA. Of those 25 storms, only one brushed by the country during the month of June -- an unnamed hurricane on June 29, 1933.