A barrage of rain dubbed a tropical rainstorm by AccuWeather meteorologists will bring the potential for life-threatening and damaging floods to the Gulf Coast this week.

Drought-quenching showers, flooding downpours and gusty thunderstorms will continue to take aim at the southern United States into the latter half of this week, AccuWeather forecasters say. The wet pattern continues to be primarily driven by a stalled cold front, but an unorganized tropical rainstorm near the shores of the northern Gulf of Mexico could cause additional problems of its own.

A front that dipped into the Southeastern states last week will remain stuck in the region from near the upper Texas coast to waters east of North Carolina through at least Friday. This front has been and will continue to be the main producer of showers and thunderstorms. 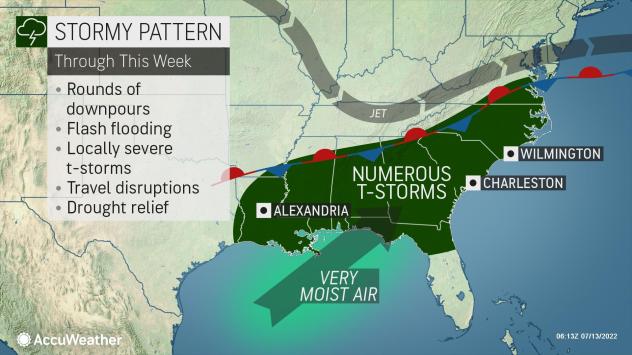 In addition to the downpours produced by the front, forecasters are monitoring a broad area of disturbed weather that sprawls from northern Gulf of Mexico waters to the adjacent shoreline from the upper Texas coast to the Florida Panhandle.

AccuWeather has dubbed this system a tropical rainstorm due to the potential for damaging and life-threatening flooding that could arise as a result of several inches to a foot of rain that could fall along part of the northern Gulf Coast through the end of this week. There is also the risk that an AccuWeather Local StormMax™ rainfall of 10 inches could be realized, should the system slowly brew and evolve into a tropical depression and wander onshore. 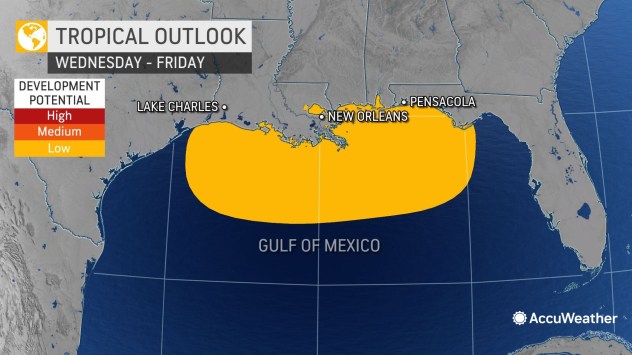 Rainfall of that magnitude can lead to major flooding should it occur in a large urban area, such as New Orleans. The city sits in a basin that is several feet below sea level and relies on one of the world's largest pumping operations to keep stormwater from building up on area streets. The pumps can handle 1 inch of rain the first hour and 0.50 of an inch of rain thereafter, according to the Sewerage and Water Board of New Orleans. Rainfall in excess of these amounts, such as more than 3 inches in five hours, could lead to flooding.

The pattern has already demonstrated that potential elsewhere in the Southeast.

The aforementioned cold front has a history of producing 3-5 inches of rain in a few locations in a matter of a couple of hours, such as Augusta, Georgia, downtown Houston and Fort Bragg, North Carolina. All three locations were slammed with torrential downpours over the past week.

City streets in downtown Houston were inundated for a short time last Thursday evening. Fort Bragg, located more than 100 miles east of Charlotte, has received nearly 7 inches of rain from July 7-10, while Augusta, which is right along the South Carolina border, received 7.87 inches of rain from the four-day stretch of July 7 to July 10. 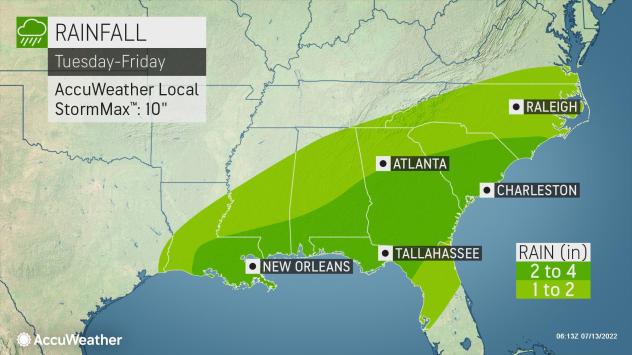 From Monday to Tuesday, a batch of dry air from the continental U.S. pushed southward over part of the zone being monitored for tropical development, AccuWeather Senior Meteorologist Brett Anderson said.

"This dry push is associated with weak northerly wind shear, and that has forced many of the thunderstorms offshore on Tuesday," Anderson said. "But, that dry push and wind shear could back off during the middle and latter part of the week, so there is still potential for the system to slowly brew into a tropical depression."

Wind shear is associated with stiff breezes that blow from the same direction but change over different layers of the atmosphere. When wind shear is strong, it can limit or prevent tropical activity in most situations.

Water temperatures over the northern Gulf are more than sufficiently high enough to support tropical development. That threshold is around 78 F. However, waters in the region are within a few degrees of 90.

AccuWeather meteorologists believe there is a low chance of tropical development with the tropical rainstorm along the northern Gulf Coast. 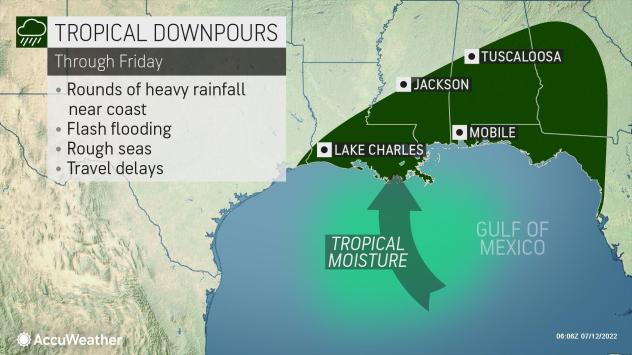 Even if the rainstorm does not become a tropical depression or storm, thunderstorms continue to fire over northern Gulf waters, and rounds of rough surf, rip currents and seas will affect the region.

As long as damaging flash flooding does not occur, rainfall in many communities may prove to be beneficial, particularly for agricultural interests, due to the ongoing drought over a large part of the region, forecasters say. Soil conditions ranged from sufficiently moist to severe drought from the Carolinas to Louisiana, according to last week's United States Drought Monitor report.

Should the tropical rainstorm begin to develop and evolve into a tropical storm, winds, seas and hazardous conditions over the northern Gulf would increase. The potential for severe thunderstorms capable of producing waterspouts and tornadoes would rise as well.

Elsewhere over the Atlantic basin, vast areas of dry air and wind shear exist and will act as a major deterrent against tropical storm formation. However, there are a couple of areas that still bear watching over the next several days. 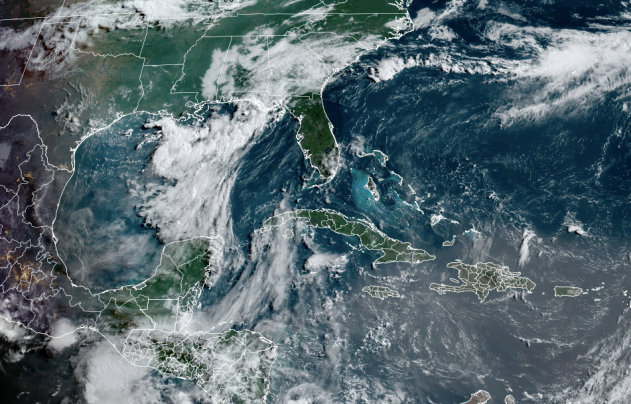 This image, captured on Tuesday, July 12, 2022, shows a tropical rainstorm brewing over the northern Gulf of Mexico (left of center), as well as vast areas of dust (brown) and dry air (blue) farther to the east (right). (GOES-East/NOAA)

One spot that will be studied by meteorologists into the weekend includes waters along and offshore of the Carolinas to the north of Bermuda. This zone represents the eastward extension of the same front that has stalled over the Southeastern states. The area is a spot where the air is rising in the atmosphere and rising air, combined with a weak low-pressure area, has been known to lead to tropical development.

Another zone is associated with a storm in the middle layer of the atmosphere. While this storm has some sporadic shower and squall activity associated with it over the islands of the northern Caribbean, there is also a considerable amount of dry air and wind shear involved.

"As this northern Caribbean system wanders northwestward later this week and weekend, there is an ultra-low chance of slow development in waters surrounding the northwestern Bahamas and east of Florida," AccuWeather Senior Meteorologist Dan Pydynowski said. "An uptick in the coverage and intensity of showers and thunderstorms is possible in parts of the Florida Peninsula and the Bahamas by this weekend." 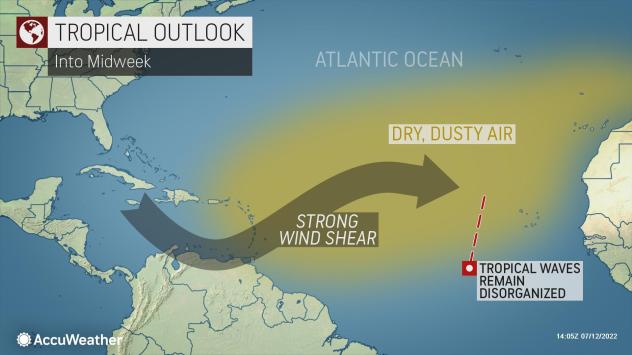 Toward the end of July and during early August, a decrease in the areal coverage of wind shear, dust and dry air may occur. That could allow some of the many disturbances rolling westward from Africa to develop into organized tropical systems.

A significant uptick in tropical activity usually occurs around the middle of August, and the Atlantic hurricane season’s annual peak occurs in mid-September.

AccuWeather's team of tropical weather forecasters, led by Hurricane Expert Dan Kottlowski, is predicting an above-average number of named systems this year including six to eight systems that will have a direct impact on the United States. There have already been two such systems, Tropical Storm Alex and Tropical Storm Colin that have had direct effects on the Southeast. Alex was not an official tropical storm until it had passed by the Florida Peninsula.

The next named storm in the Atlantic basin will be called Danielle.

Calif. farmer says drought could have big impacts on consumers