Joel Myer's hometown station was the first to partner with AccuWeather for superior local forecasts.

Adam Joseph, a meteorologist from the Philadelphia TV station WPVI, delivered the forecast from the AccuWeather headquarters in State College, Pennsylvania, on Monday, in celebration of a half-century-long partnership that has helped to deliver accurate forecasts to viewers.

The special occasion came days ahead of July 16, 2022, a date that will mark 50 years since the ABC-owned station became AccuWeather's first TV client, sparking a close-knit partnership that allowed forecasters to review and coordinate to create more accurate and precise forecasts.

Some of AccuWeather's longest-tenured meteorologists were in attendance to welcome Joseph to the headquarters and watch the culmination of decades of forecasting the weather together. 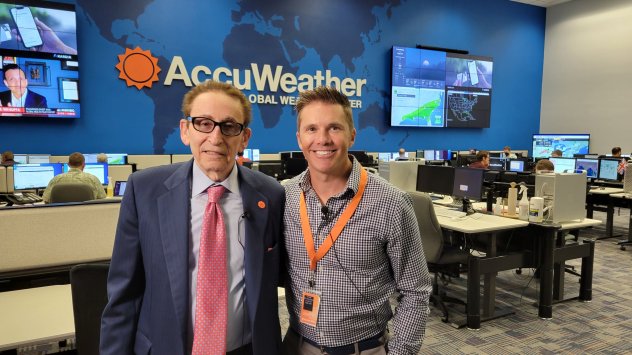 "Our goal is the same thing in the end. The end result is to have the best product out, the best possible forecast out there," said AccuWeather Senior Meteorologist Dave Dombek who has coordinated forecasts with WPVI since 2002 and has hosted everything from weather briefings to spur-of-the-moment adjustments to forecasts. He added that studies have shown that the collaboration between meteorologists and consensus forecasting has led to more accurate forecasts.

"Having access to another professional forecaster like that was very valuable to me," Grow Cei said. "Normally in TV weather, you're by yourself on your shift -- but when it comes to forecasting, there's no such thing as too many cooks in the kitchen! The AccuWeather forecasters were a helpful 'second opinion'," she said, adding that they often "provided further insight and context to the data I saw on the computer models."

A meteorologist who was first at AccuWeather and now WPVI, Meteorologist Brittany Boyer has found herself on both sides of the collaboration. Working at the two companies has been “a full-circle experience," she said, as someone who grew up watching 6ABC and the “exclusive AccuWeather forecast.”

"Even though I left AccuWeather to work at my hometown station 6ABC, my former coworkers in a way are still part of my team," Boyer said.

She added the partnership between the two companies was "truly special" as they collaborate to bring the most accurate forecast to the station's viewing area, where a few degrees in temperature change greatly determines the type of precipitation, as well as the amount, particularly during the winter.

"Our collaboration with AccuWeather is another resource for us to make sure we are delivering the most accurate and informative forecast to viewers," Boyer said. "Some of the meteorologists at AccuWeather who help us on a daily basis have been forecasting for 20-30+ years."

WPVI's visit on Monday included Joseph sitting in on a map discussion, an appearance on AccuWeather Prime, the TV network's prime-time program that launched a little more than a year ago, as well as a host of interviews with AccuWeather leaders and employees, including Founder and CEO Dr. Joel N. Myers, Chief Meteorologist Jonathan Porter and Dombek. 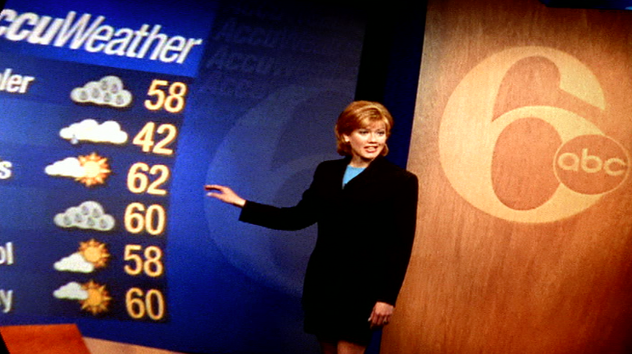 Born and raised in Philadelphia, Myers' first encounter with a broadcast meteorologist was with Dr. Francis Davis, the city's first meteorologist to be licensed by the U.S. Weather Bureau, the predecessor of the National Weather Service, to receive weather reports via "teletype," a machine used to communicate typed messages from point to point through an electrical communications channel across the nation. Davis presented the weather on WFIL-TV, WPVI-TV's predecessor, from 1947 to 1971, and by the end of January 1959, he was the first meteorologist to display the American Meteorological Society television seal.

Davis also gave Myers advice on a career in meteorology, as well as counseling and encouragement on both television weather and forecasting. After Davis left WPVI, the station would later reach out to Myers. 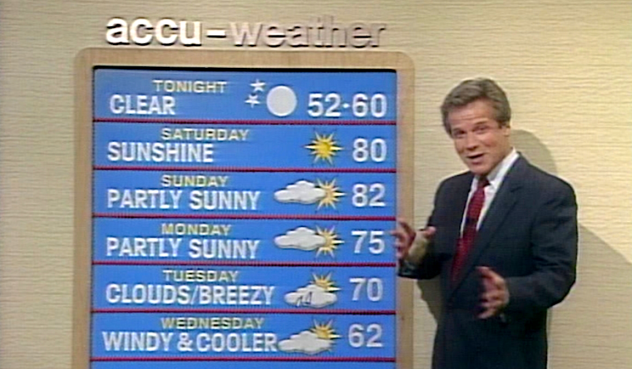 "When Dr. Davis retired from WPVI after 24 years as their meteorologist, the station management contacted me to see if I could help," Myers said at the AMS Titans that Built TV Weather panel in June. "They heard me on KYW Radio. And so they became our first television client in July of 1972, receiving forecast briefings and the use of the AccuWeather brand name. Channel 6 still airs the AccuWeather forecast today."

The service AccuWeather developed for WPVI now helps over 40 television stations, and AccuWeather on 6 ABC Action News is one of the longest continuously running shows of any type of television, according to Myers.

"They're our client," Dombek said, "but they're like family."

Dramatic photos show tree burning from the inside out