The haze from the Saharan dust gave this sunset a more breathtaking effect in St. Pete Beach, Florida, on June 26.

The East Pacific tropical basin sprung to life this past week as multiple areas of tropical low pressure developed across the region, including one that became Tropical Storm Boris. However, that uptick in activity could be about to change, say AccuWeather meteorologists who have been closely examining the tropics.

After becoming a tropical storm briefly late in the day on Thursday, Boris has since weakened to a post-tropical low pressure area well to the southeast of Hawaii.

Behind Boris, there is one other area that AccuWeather forecasters are monitoring in the East Pacific Basin.

A feature that emerged off the coast of Central America late this past week has a small window for development off the southwestern coast of Mexico.

The cluster of showers and thunderstorms remained disorganized on Saturday as it moved to the northwest, generally paralleling the coast of Mexico. 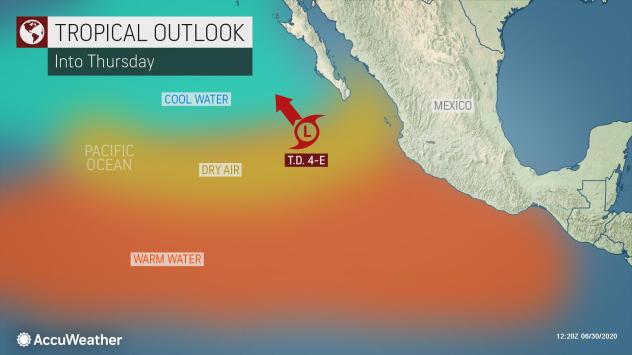 However, the showers and thunderstorms became better organized on Monday evening and the disturbance was designated as Tropical Depression 4-E. The system is expected to be short-lived as it moves toward cooler water and increased wind shear on Tuesday. By Tuesday evening or Wednesday morning, the tropical depression is likely to become a non-tropical low pressure area. Throughout its short lifespan, the system not expected to be a threat to any landmass.

The next system to strengthen into a tropical storm with winds of 39 mph (62 km/h) in the East Pacific Basin would be given the name Cristina.

At the same time, meteorologists have been monitoring Saharan dust pushing through the Caribbean Sea and into the Gulf of Mexico, which is helping to stifle widespread tropical development in the Atlantic Basin. Dolly formed outside of the large plume of dust this past week, more than 300 miles southeast of Nova Scotia, and became the second earliest fourth-named storm in recorded history in the Atlantic.