After weakening to a tropical depression, Eta is staging a comeback and will gather strength in the coming days.

The tropical depression that was previously Hurricane Eta on Thursday has emerged back over the northwestern Caribbean Sea, a move that will supply it with plenty of warm water for strengthening as it takes aim at Cuba and possibly Florida.

Eta could reach hurricane force again on its way toward Cuba, and at this point, AccuWeather meteorologists expect it to approach southern Florida as a tropical storm.

In addition to Cuba and Florida, people in the southwestern Bahamas are urged to closely monitor the progress of Eta, especially as the system emerges from the area around Belize, Guatemala and Honduras on Friday.

The Florida Keys and Peninsula have largely dodged impacts amid a record-setting Atlantic hurricane season, which has spawned 28 named systems. No landfalls have occurred in the state yet this season, but forecasters say the region is not out of the woods yet. Eta may pose a significant threat to lives and property and, at the very least, an interruption to daily activities and travel late this weekend and early next week. 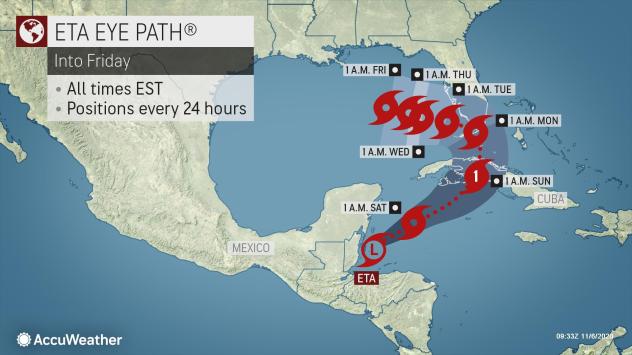 Instead of withering away over Central America this week, Eta's circulation survived the trip over land and re-entered the western Caribbean early Friday morning. Here, forecasters expect reorganizing and restrengthening to occur.

Eta turned deadly in Central America, with the storm claiming at least 70 lives as of Thursday, with over 50 fatalities in Guatemala according to Reuters.

The storm was located 110 miles north-northwest of La Ceiba, Honduras, as of Friday morning. It had weakened considerably and was downgraded to a tropical depression late Wednesday with sustained winds down to 30 mph early Thursday morning, but by later in the afternoon, its winds had increased to 35 mph as it continued to move north at 8 mph Friday morning. 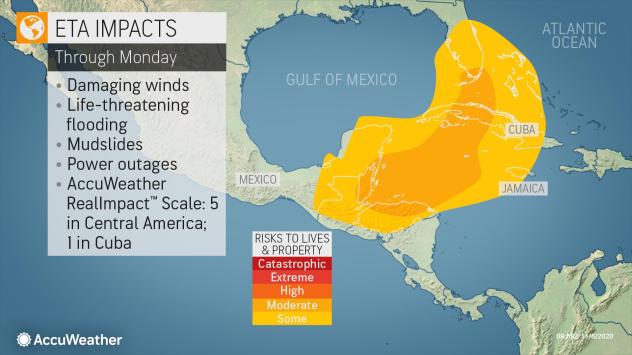 But other weather factors will influence its ability to ramp up again.

"It may come down to wind shear as to how much strengthening is able to occur prior to the system reaching western Cuba Saturday night," AccuWeather Senior Meteorologist Rob Miller said. 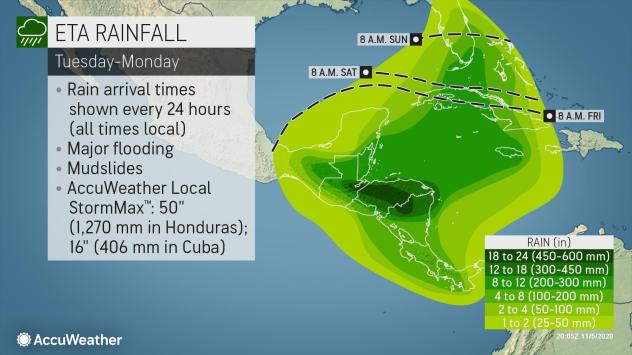 But even if wind shear prevents the storm from reaching hurricane force, forecasters expect it to be a big rainmaker and pose a number of other threats.

Conditions are forecast to deteriorate over western Cuba, especially along the southern coast during Saturday afternoon and evening. Rounds of heavy rain, strong winds and surf are anticipated. The risk of flash flooding will increase, as will the potential for mudslides in the mountainous terrain.

A general 8-12 inches (200-300 mm) of rain is forecast with locally higher amounts in the mountains of Cuba. Peak wind gusts of 80-100 mph are forecast over west-central Cuba. A storm surge of several feet (1-2 meters) is possible along the southern coast of Cuba, near and just east of the center. In Havana, on the north side of Cuba, northerly winds are likely to create overwash that could lead to coastal flooding in and around the city.

But, how much rain, wind and storm surge occur in western Cuba overall will depend on the intensity of Eta at landfall as well as its forward speed.

"Should Eta strengthen beyond a Category 1 hurricane prior to reaching Cuba and/or move more slowly than projected, rain and wind could be greater than anticipated in Cuba and later Florida," AccuWeather Senior Meteorologist Mike Doll said.

"On the other hand, should Eta fail to reach hurricane strength prior to crossing Cuba and maintain forward speed, rain and wind could be substantially less than forecast in both Cuba and Florida," Doll added.

The storm may have another opportunity to strengthen once it emerges over the Florida Straits to the north of Cuba during the day Sunday. At this time, forecasters expect Eta to approach the Florida Keys and South Florida Sunday evening.

Impacts in South Florida and the Florida Keys during the latter part of this weekend to the first part of next week will depend on storm's exact track and speed after its encounter with Cuba. The magnitude of wind, rain and storm surge anticipated in the Sunshine State could change over time as details on Eta's erratic path and strength become more clear. 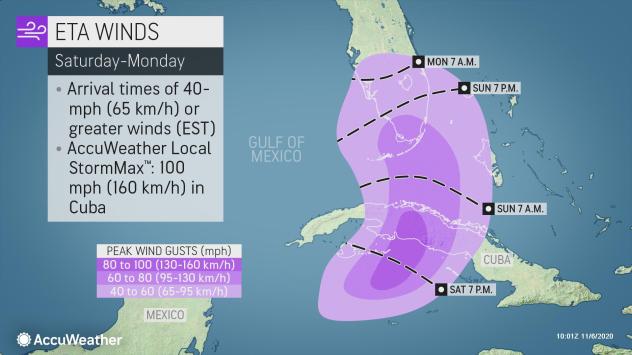 Tropical-storm-force winds of 40 to 60 mph are likely to arrive in the Florida Keys as early as Sunday morning. The strong winds will then spread northward over the southern part of the Florida Peninsula later Sunday and Sunday night. Gusts this strong could lead to sporadic power outages and send loose items in yards and patios airborne.

Forecasters are urging people to secure outdoor items ahead of the storm and take other precautions such as locating coverings for windows and checking the operation of storm shutters and ensuring that generators are in working order.

Provided that Eta strikes Cuba as a hurricane and maintains some strength while crossing Cuba on Saturday night, there is the potential for hurricane-force wind gusts of 74 mph or greater in part of the Florida Keys and perhaps the southern tip of the Florida Peninsula from Sunday afternoon to Monday. Miami could see winds of 60 mph to 80 mph.

At this time, AccuWeather meteorologists expect a general 4-8 inches of rain over South Florida, including Miami, the Florida Keys and part of the western part of the Bahamas with locally higher amounts to near 1 foot possible. Rainfall of this magnitude has the potential to cause flooding in low-lying areas.

The circulation from Eta, even as a tropical storm, is likely to create a storm surge over coastal areas of southern Florida. Storm surge could inundate some roads and escape routes should Eta affect the region as a hurricane.

Easterly flow of air around an area of high pressure to the north had already stirred above-normal tides and rough seas and surf from the Florida Keys through the Atlantic coast of the Florida Peninsula this week. 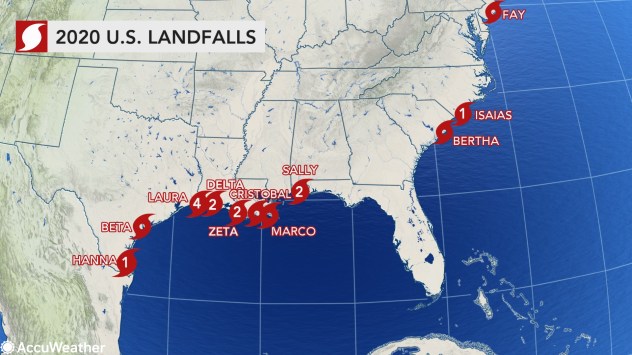 A record-setting 11 named tropical systems made landfall so far in the U.S. this hurricane season. (AccuWeather)

The exact path that Eta will take through Cuba and around Florida is uncertain, but the possibilities are even less certain for where the storm will head later next week and beyond. Forecasters say the most likely scenario is for Eta to emerge into the Gulf of Mexico after striking southern Florida, but there is the potential that the storm will linger near Cuba and Florida instead, or it could possibly even move northward between the Bahamas and Florida.

Eta has already made history and matched the strength of the strongest storm of the tumultuous 2020 hurricane season -- Hurricane Laura -- when its winds peaked at 150 mph earlier this week. Eta joined the ranks of eight other tropical systems in the Atlantic this season and underwent rapid strengthening, which is defined by a tropical system that experiences an increase its maximum sustained winds by 35 mph within 24 hours. Its winds increased from 70 mph when it was at tropical-storm force late Sunday evening to 150 mph -- just shy of Category 5 strength -- late Monday evening -- in just 24 hours.