Next Atlantic tropical system could spin up in Caribbean

AccuWeather meteorologists are watching an area in the southwest Caribbean Sea which could become the next organized tropical threat in the Atlantic.

All has been quiet in the Atlantic, Gulf of Mexico and the Caribbean Sea since Tropical Storm Alex dissipated early last week, but AccuWeather meteorologists say that the lack of tropical activity may not persist through the end of June.

A large area of dust and dry air that recently moved across the Atlantic and into the Caribbean has inhibited the development of showers and thunderstorms over the past several days. Without any clouds and showers, the formation of a tropical system cannot take place.

However, that dust has begun to shift away from the Caribbean Sea, opening the door for moisture to increase and for a new tropical system to develop.

Besides the departing dry air, an approaching tropical wave may help to spur an increase in shower and thunderstorm activity.

"A tropical wave will have to be monitored in the coming days and may spark development in the western Caribbean," said AccuWeather Senior Meteorologist Adam Douty. 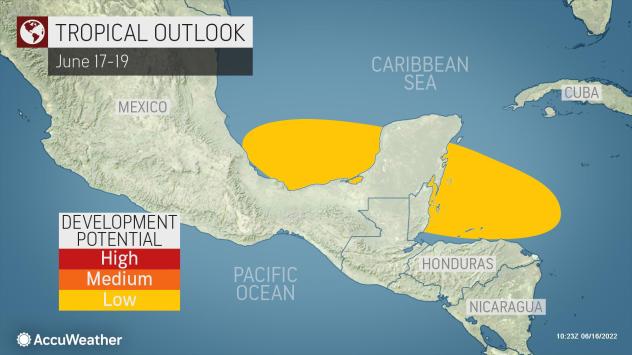 Despite somewhat more conducive conditions for development, there are a couple of major factors working against the formation of a tropical depression or tropical storm in the short term.

"The close proximity to land and increasingly strong wind shear as the system moves farther north are both expected to be limiting factors," explained Douty. Steering breezes are likely to quickly guide any budding tropical system toward Central America and then inland over the region.

Despite the impediments to development, water temperatures will not be one of them. According to the Ocean Prediction Center, warm water around 86 degrees Fahrenheit is present just off the coast of Nicaragua and Honduras, where last-minute development could occur. The water temperature threshold for tropical development is about 78 F.

Unlike Alex, which moved northward into the Gulf of Mexico and then northeastward across Florida and into the Atlantic Ocean, if a new system does develop it is most likely to remain in the western Caribbean or the southern Gulf of Mexico.

Regardless of whether or not a new tropical system takes shape, steering breezes could direct downpours and thunderstorms across parts of Central America and southeastern Mexico over the balance of the month.

"Residents will want to be alert for heavy rain and flash flooding, especially through the end of this week from eastern Nicaragua into Honduras," Douty said. 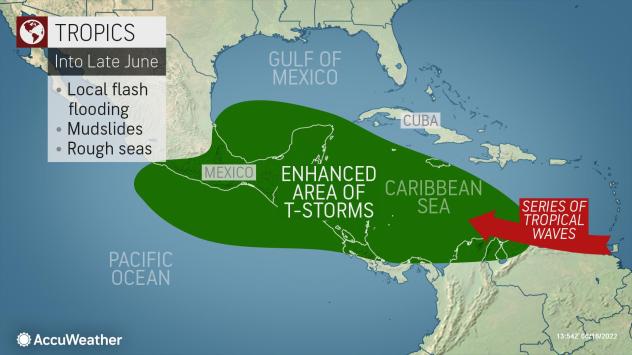 The same general area of the Caribbean and the southern Gulf of Mexico could remain an area to watch for tropical development through the end of the month and perhaps into early July as disturbances continue to roll in from the east and enter the zone of lingering moisture.

"It's a matter of alternating rounds of dry, dusty air and moisture from tropical waves," AccuWeather Senior Meteorologist Alex Sosnowski said. "As the tropical waves emerging from Africa get stronger and water temperatures rise as the season progresses, the chances of tropical development will increase."

Sosnowski pointed out that steering breezes in the western Caribbean and the Gulf of Mexico could become more southerly once again, which is what occurred when Tropical Storm Alex was brewing.

"That change might allow any budding tropical system to move northward late in June or early in July," Sosnowski said.

The next tropical storm name on the list for 2022 is Bonnie.