More than two dozen tornadoes touched down as Isaias raced up the East Coast. AccuWeather’s Bill Wadell looks at the factors needed for tropical tornadoes.

Three dozen tornadoes have been confirmed in the aftermath of Isaias' impacts on the mid-Atlantic and Northeast on Tuesday, and more could be confirmed.

The storm made landfall as a Category 1 hurricane late Monday in Ocean Isle Beach, North Carolina, before racing up the coast delivering flooding rain, damaging winds and even knocking one home off its foundation.

Following its rampage through the Northeast, about 3.5 million customers were left without power, many of whom were left in the dark due to Isaias' widespread damaging winds.

A great deal of the damage and destruction can be attributed to the high number of tornadoes spun up by the tropical system, including one confirmed by the National Weather Service in Mount Holly on Friday afternoon. 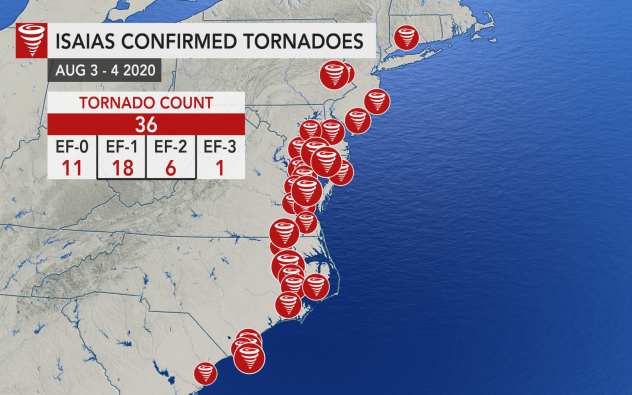 One of the most devastating was an EF3 tornado that plowed through a stretch of Bertie County, North Carolina, killing two and injuring at least 14. The twister produced winds up to 145 mph; at the time of landfall, Isaias had maximum sustained winds of 85 mph.

"We mourn the loss of life here; we also are thinking about the families who are hospitalized," North Carolina Gov. Roy Cooper said during a tour of damage in Bertie County the following day.

Five additional tornadoes have been confirmed in Brunswick County, North Carolina. One of which was an EF2 twister that packed winds up to 115 mph. No injuries or fatalities were reported.

"I heard the freight train … we ran to the center of the house and got in the closet. Then it was gone as quick as it started,” Heidi Guyer, a resident of Brunswick County, told ABC News.

In Delaware, a record-shattering EF1 tornado rumbled 29.2 miles through Kent and New Castle counties, breaking the previous state record length of 13 miles from June 6, 1988. The tornado occurred between 8:55 a.m. and 9:25 a.m. on Tuesday and had a maximum width of 200 yards. Fortunately, nobody was hurt or injured.

The entire state of Delaware is only 96 miles long.

AccuWeather Senior Weather Editor Jesse Ferrell said the confirmed count will likely increase as the sites where at least three to four other potential tornadoes are believed to have touched down had yet to be surveyed.

In 2004, Hurricane Ivan produced more than 118 tornadoes from Florida to Pennsylvania, a total greater than any other tropical system since modern record-keeping began in 1950, according to the National Weather Service.

Conditions with Isaias were ripe for tornado development, according to AccuWeather meteorologists.

"The upper-level system approaching from the west maintained a venting pattern," AccuWeather Hurricane Expert Dan Kottlowski said. "In other words, it caused the upper-level winds over top of the system to vent very effectively. So that all the air was still rising dramatically from the bottom to the top, just like a chimney."

AccuWeather Broadcast Meteorologist Geoff Cornish said that depending on a tropical storm or hurricane's path, some areas could be at a higher risk for tornadoes than others.

“If you find yourself east of the track of the storm, you’re going to be in that spot, the right front quadrant of the storm is where you are at significant risk of tornadoes,” Cornish said.

Cornish and Kottlowski both emphasized that despite the torrid start to the 2020 season, there is much more to come. AccuWeather meteorologists say up to 24 named storms could occur before all is said and done at the end of what may turn out to be a hyperactive season.

"If this were a baseball game, it might be the top of the third inning here," Cornish said. "So we are concerned about the active season continuing."

Isaias produced major damage despite topping out at Category 1 hurricane strength. Kottlowski warned that much stronger hurricanes could developer later this season.

"We’re going to start seeing more of the [Category] 2s, 3s, 4s, maybe 5s as well," Kottlowski said, noting the ingredients such as warmer waters and lower amounts of wind shear will allow these tropical systems to thrive. "Everything is adding up to a very active rest of the season.”