The Florida coastline resembled a war zone on Thursday, and the U.S. president warned Ian may have caused a “substantial loss of life" after one of the most powerful hurricanes to ever strike the U.S. pummeled Florida.

Hurricane Ian slammed into Florida Wednesday afternoon as one of the strongest hurricanes on record to ever hit the United States. The trail of destruction the massive hurricane left behind was just beginning to become clear as the sun rose on Thursday. Bridges were destroyed, homes were wiped out by the ferocious storm surge and millions remained without power -- enough to prompt President Joe Biden to enact federal disaster aid.

President Joe Biden warned during a press briefing at FEMA headquarters that Ian could be the “deadliest” hurricane in Florida’s history.

“The numbers are still unclear, but we’re hearing early reports of what may be substantial loss of life,” Biden said.

As authorities assess the damage caused by the storm, Biden pledged to support local and state officials, saying the federal government will cover the entire cost of clearing debris and rebuilding public buildings, such as schools. The government will also be providing support to people with damaged or destroyed homes.

The Volusia County Sheriff’s Office confirmed on Thursday morning that a 72-year-old man died of an apparent drowning during the overnight hours into Thursday. The victim went outside his home in the city of Deltona, roughly 25 miles northeast of Orlando, to drain his pool during Ian’s approach when he apparently fell into a flooded canal, the sheriff’s office said.

Deputies responded to a home on Poinciana Lane near Lake Bethel around 1 a.m. after the victim’s wife reported that he had disappeared after heading outside. While searching for him, deputies found his flashlight then spotted the victim unresponsive in a canal behind the home, officials said in a statement.

“The initial investigation indicates the victim was using a hose to drain the pool down a hill and into a 30-foot-wide canal, where a steep decline into the water was extremely soft and slippery due to the heavy rain,” officials said in a statement.

After the victim was pulled from the canal, he was given CPR when paramedics arrived. He was then transported to a nearby hospital where he was later pronounced dead.

The Associated Press reported an additional two deaths in Sanibel, one of the hard-hit barrier islands of Florida's west coast. The fatalities had been confirmed by fire officials, Sanibel city manager Dana Souza told the AP, but there were no other details provided. In addition to these fatalities, a 38-year-old man from Lake County died Wednesday in a motor vehicle accident after hydroplaning, according to the Florida Department of Law Enforcement. Medical examiners had determined his death was storm-related, the AP reported.

While addressing the possible loss of life in an update Thursday evening, Florida Gov. Ron DeSantis said that the full scope of the death toll would "be made apparent over the coming days."

"We absolutely expect to have mortality from this hurricane," he said.

Hurricane Ian made landfall as a strong Category 4 hurricane Wednesday afternoon on the barrier islands of southwestern Florida, just west of heavily populated Fort Myers. It crashed ashore on the Florida mainland -- its second U.S. landfall -- just south of Punta Gorda in Charlotte County later in the afternoon. Only four hurricanes on record have made landfall over the contiguous U.S. with maximum sustained winds greater than 155 mph.

Ian unleashed relentless wind gusts across Florida as the eyewall moved inland. The highest reported wind gust was 126 mph recorded by an NOAA station in Captiva/Redfish Pass, which is close to where Ian made landfall. 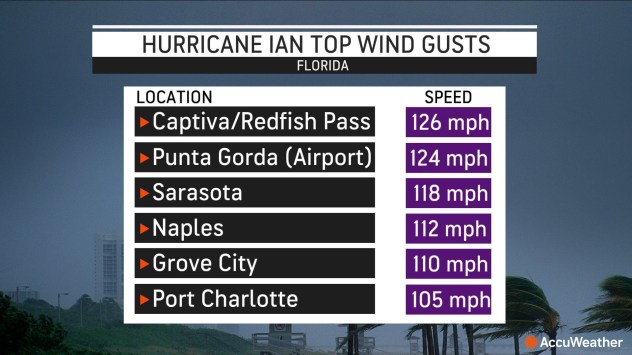 Videos from southwestern Florida showed just how destructive and powerful the wind was. In one video from Punta Gorda, some trees were uprooted while others were bent sideways from the extreme winds. Debris could be seen flying past the camera in one shot from Fort Myers.

In Cape Coral, Florida, a coastal city in Lee County just a few miles from Fort Myers, Yania Izquierdo, 44, told AccuWeather that the hurricane had been "vicious" and nearly tore the door from the building where they were taking shelter.

"My husband and his dad were holding our main door for five hours straight because it was going to give in, and it had shutters on," Izquierdo said.

"On the back end of this storm, the sustained winds really seem to be more powerful and more constant compared to the winds we were getting earlier when Hurricane Ian first made landfall," AccuWeather National Reporter Bill Wadell said in a video update on Wednesday. "Incredibly dangerous out here."

By Thursday morning, rainfall totals neared 20 inches in some areas across Florida. The Sunshine State was experiencing one of its wettest months in years due to the intense downpours that Ian unleashed across the state.

"Right now if you look in Central Florida, you're looking at potential major flooding and Orange and Seminole counties, St. John's River all the way up potentially into Northeast Florida in Jacksonville," DeSantis said at a press conference Thursday morning. "The amount of water that's been rising, and will likely continue to rise today even as the storm is passing, is basically a 500-year flood." 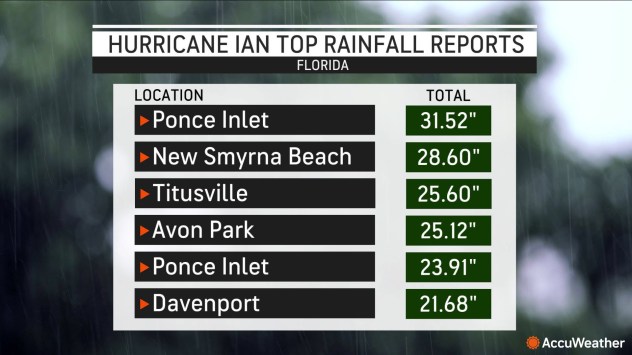 In just 24 hours, automated rain gauges reported as much as 31.52 inches of rain near Ponce Inlet while an amateur weather observer recorded 28.60 inches at New Smyrna Beach. In Orlando, nearly three times the typical September rainfall of 6.37 inches fell. Preliminary weather data from Orlando International Airport shows that the monthly rainfall total is at 22.45 inches, which would make this September the wettest month in city history.

More than a dozen rivers in Florida along Hurricane Ian's track have exceeded major flood stage or are forecast to, and several have preliminarily broken records, according to NOAA river gauges.

"This is a life-changing event for all of us," Lee County Sheriff Carmine Marceno told ABC News. "We still cannot access many of the people that are in need...it's a real, real rough road ahead."

As of Thursday morning, power outages surpassed 2.6 million in Florida, according to PowerOutage.US. The bulk of the outages was in the area where Ian made landfall, with virtually every resident and business in Hardee County in the dark.

Power outages and disruptions to cell phone services have made it nearly impossible for people in the hardest-hit areas to call for help. 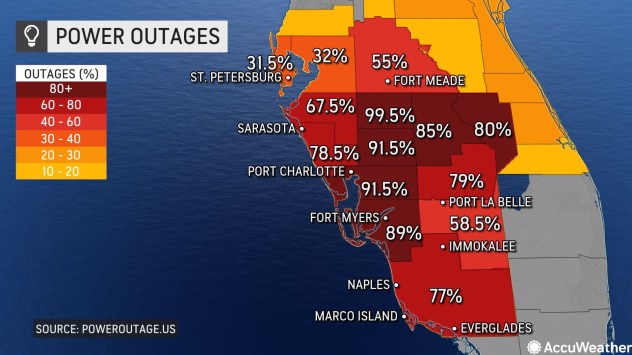 "Portable towers are on the way for cell service," the Collier County sheriff’s office said, The Associated Press reported. "Chances are your loved ones do not have [the] ability to contact you."

Officials told Angeline that the flooding was much worse in Orlando compared to when Hurricane Irma made landfall in 2017.

In an update on Thursday evening, DeSantis said there had been more than 700 confirmed rescues, and he expects the number to rise. The rescues took place across areas including Fort Myers, Fort Myers Beach, Sanibel, Marco Island and the Barrier Islands.

In Port Charlotte, the storm surge flooded a hospital's emergency room, and winds ripped away part of the roof from its intensive care unit, the AP reported. Some of the sickest patients — some on ventilators — were evacuated to the second and third floor, which were both not flooded.

“The ambulances may be coming soon, and we don’t know where to put them in the hospital at this point,” Dr. Birgit Bodine told the AP. “Because we’re doubled and tripled up.”

The roofs of homes were torn off in Port Charlotte, which is just north of Fort Myers. A drone video, shared by WxChasing, shows debris scattered across the street and multiple homes with no roof and structural damage.

A section of the Sanibel Causeway, the only bridge that leads to Sanibel Island, collapsed on Wednesday night in the wake of Hurricane Ian. The island is a barrier island located just south of where Ian made landfall and is home to around 6,500 people. It is unclear how many people rode out the storm on the island or how long it will take until repairs can be made. Officials are planning to evaluate the rest of the bridge to determine if other sections are at risk of collapse.

Just south of Sanibel Island, in Naples, devastating flooding inundated a fire station Wednesday afternoon. Firefighters rushed to save emergency equipment and gear. A video shows a fire station of the Naples Fire-Rescue Department flooded out, with firefighters grabbing equipment from a submerged fire truck and wading through the waters back inside the station. 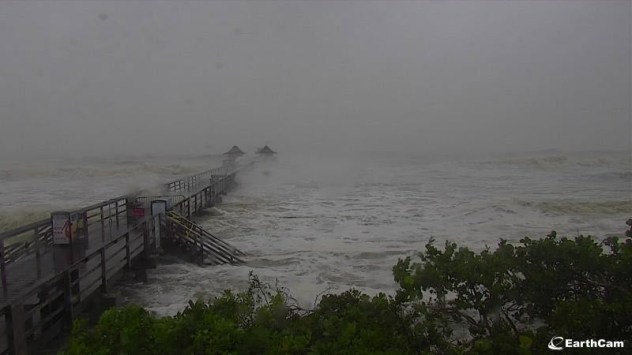 Naples Pier from the Earthcam webcam on the afternoon of Sept. 28, 2022. This was the last image from the cam before it went offline.

Parts of the Naples Pier sustained heavy damage as destructive waves crashed onto it. A video feed from EarthCam showed people on the pier before the worst of the storm moved inland. By the time Ian made landfall, it was a much different scene on the pier. Water levels nearly submerged the pier and waves came crashing down on it before the EarthCam video went offline.

The police department in Marco Island, which is just southwest of Naples, wrote in an update that floodwaters had receded, but utilities and traffic lights were still out and cell phone coverage is intermittent.

Jason Beal, a longtime Marco Island resident, posted photos of the flooding on social media on Wednesday. Among the photos, a river of water was pictured covering North Collier Boulevard, which is one of the main roads to get on and off the island.

”The water looked like a stream coming down the road when it came in,” Beal, 53, said to AccuWeather. “I think this will be less damage than Irma on Marco [Island].” 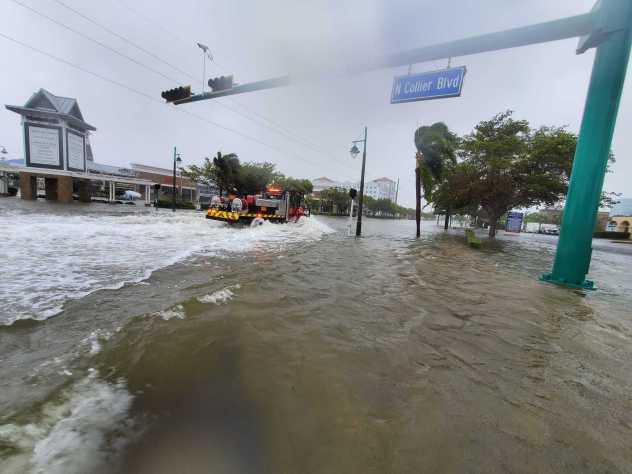 Beal noted the differences between the two storms, pointing out that Hurricane Irma brought extensive wind damage to the island, while Hurricane Ian was more like a flash flood.

Early Thursday morning, President Biden approved a disaster declaration for Florida, allowing for federal aid to be used to help the recovery effort in the wake of Hurricane Ian. The declaration was approved for nine of the hardest-hit counties -- Charlotte, Collier, DeSoto, Hardee, Hillsborough, Lee, Manatee, Pinellas and Sarasota.

“Assistance can include grants for temporary housing and home repairs, low-cost loans to cover uninsured property losses, and other programs to help individuals and business owners recover from the effects of the disaster,” the White House said in a press release.

Other federal resources will be available across the entire state as millions work together to pick up the pieces following the historic storm.