Even after the storm dissipates, the threat of flooding will remain into Monday.

Residents along the Texas Gulf Coast on Saturday morning were bracing for a hit from Hanna, which is now looming about 80 miles southeast of Corpus Christi. Hanna is packing 80 mph winds and moving west over the warm waters of the Gulf of Mexico at a speed of 7 mph. 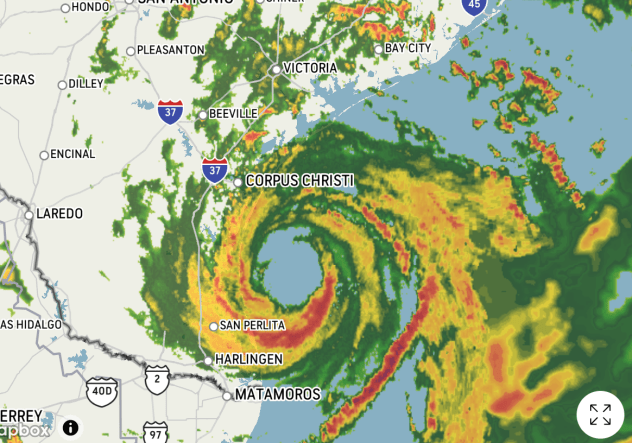 AccuWeather forecasters predict Hanna will make landfall Saturday afternoon. "Hanna is expected to [be] a Category 1 hurricane before landfall," AccuWeather Meteorologist Alyson Hoegg said on Friday, adding that just south of Corpus Christi is where the storm will likely come ashore, near Baffin Bay, Texas.

AccuWeather forecasters have rated the storm a 1 on the AccuWeather RealImpact™ Scale for Hurricanes, a more nuanced method the company introduced in 2019 to assess the potential damage a tropical system could cause. 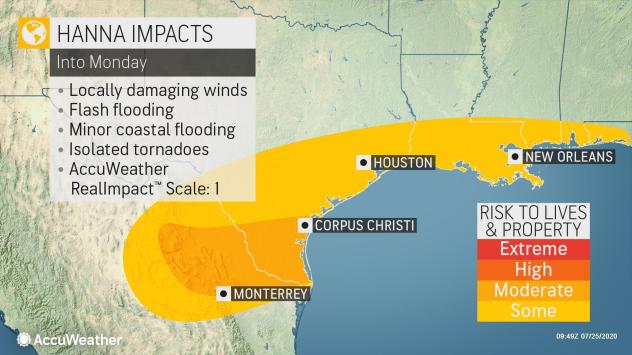 Authorities in Corpus Christi shut down the beaches at noon on Friday ahead of the storm's arrival. Police and lifeguards could be seen ushering people off the beaches there, AccuWeather's Bill Wadell reported. The fire department was preparing crews for swift-water rescues and residents were filling sandbags.

Texas Gov. Greg Abbott had urged "all those who are in the path of this storm to heed the warnings and guidance from local officials before the storm makes landfall." In a statement, Abbott said that "Texas will coordinate with local officials to provide assistance and resources to communities in the area." Abbott was also updating residents on the growing COVID-19 crisis impacting much of his state.

On Saturday afternoon, power outages rose past 14,000 along the coastline, according to PowerOutage.us. Outages are expected to rise throughout the weekend. 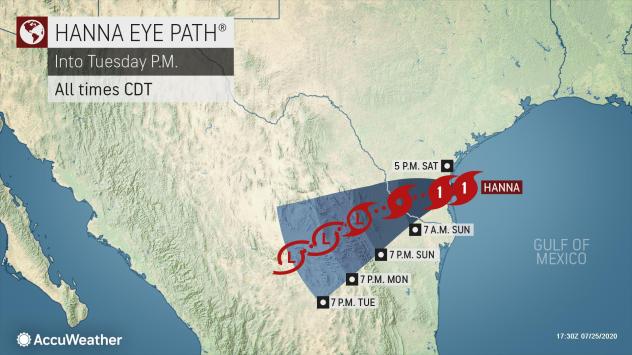 Heavy rain will pose the greatest risk to lives and property along the Gulf Coast, forecasters say. A general 2-4 inches of rain is forecast to fall across a wide area of southeast Texas. Places closer to the coast, including Corpus Christi, Galveston and even into portions of the Rio Grande Valley could see as much as 8 to 12 inches of rainfall. An AccuWeather Local StormMax™ of 16 inches (400 mm) is expected in Mexico.

Locally heavy rainfall, enough to produce flash flooding, will occur across parts of Louisiana and Texas through Saturday, regardless of precisely where the storm comes ashore. "Some of the rain will be beneficial," AccuWeather Senior Meteorologist Alex Sosnowski said, adding, "but too much rain may also fall -- perhaps close to a foot in some areas of South Texas -- which will lead to flooding." 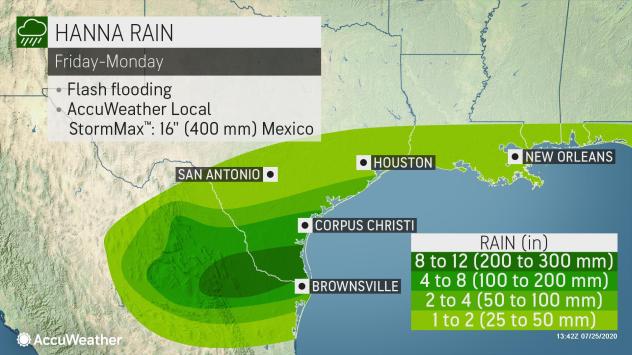 Low-water crossings -- rough paved roads that go through shallow streams with typically only a few inches of water flowing over top, which are prevalent in the area -- will become too dangerous to navigate. Sosnowski said that in addition to some places in Texas seeing up to a foot of rain, even more rain could fall in the mountains of Mexico as the storm crosses the border while moving farther inland.

Forecasters said Hanna's rainfall could intensify as it moves inland.

"While we expect Hanna to move at a steady pace, unlike that of Harvey, it will be moving slowly and that can still unleash a lot of rain and raise the risk of major flooding over South Texas and part of northern Mexico," Sosnowski said.

Gusty onshore winds could also lead to rough surf and rip currents along the central and western Gulf Coast through the weekend.

"There can be some gusty thunderstorms and perhaps a couple of tornadoes or waterspouts around the time of landfall at the close of the week," Sosnowski said.

The strongest winds will be near and just north of where the center makes landfall but gusty winds can extend 100 miles or more to the north of the large system. 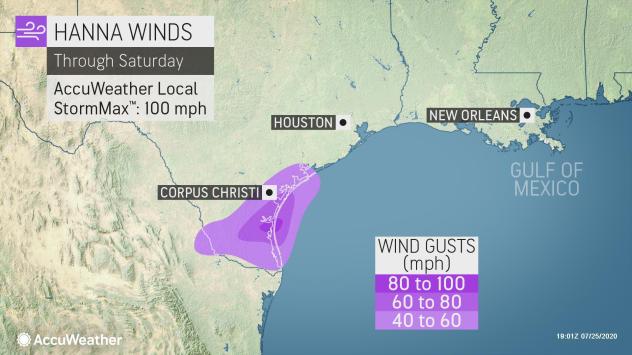 An uptick in rough surf including the frequency and strength of rip currents is in store along the western and central Gulf Coast of the United States into Saturday with the big storm acting like a giant plunger.

On top of the rough surf, the persistent onshore flow from the storm will bring about coastal storm surge. Areas that end up just on the northern side of the circulation will experience the strongest push of water, resulting in areas of coastal flooding and beach erosion.

South of where Hanna makes landfall, a westerly wind is expected to cause waters from the bays to push on to islands.

The formation of Hanna on Thursday night resulted in the second record broken in the Atlantic basin just this week. Hanna is the latest named storm in what has already been a remarkably busy Atlantic hurricane season, and one that AccuWeather meteorologists have been warning for months would be "very active." 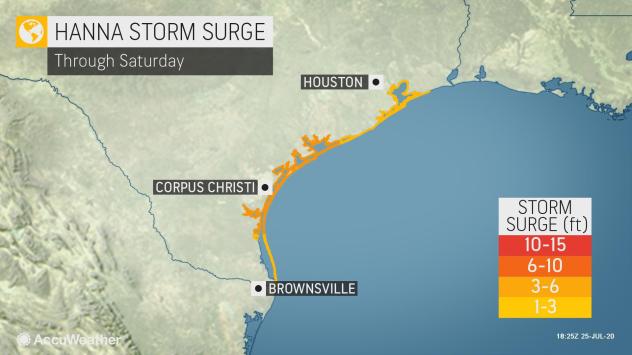 NOAA hurricane hunters investigated the storm late Thursday evening and officials at the National Hurricane Center (NHC) made the call to upgrade the storm to tropical storm status late Thursday night. Another investigation conducted on Friday showed the storm had strengthened some.

Tropical Storm Gonzalo became a record-breaker in its own right on Wednesday as the earliest "G" named storm in Atlantic basin history. By Friday afternoon, AccuWeather forecasters said the compact tropical storm would not reach hurricane force.

With its formation, Hanna earned the distinction of being the earliest-recorded "H" named storm in Atlantic basin history. Prior to Hanna, the earliest eighth-named storm was Tropical Storm Harvey from 2005, which formed on Aug. 3. The name Harvey was retired after Hurricane Harvey devastated the Houston area with more than 60 inches of rain in 2017. 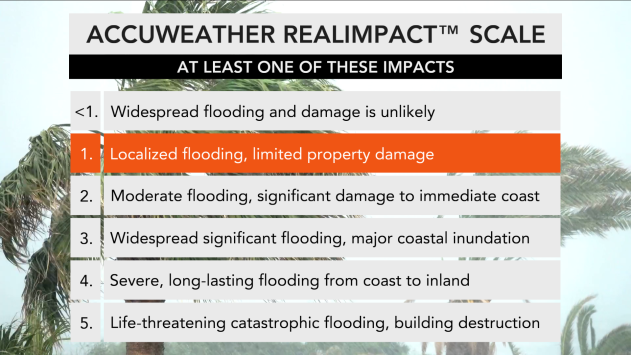 AccuWeather National Reporter Bill Wadell is on the ground in Corpus Christi and will be there as the storm moves through. On Thursday, he spoke with Lori Ramirez, a Corpus Christi native who recently moved back there. Ramirez told Wadell that many who live there consider tropical storms "a part of life" but that Hurricane Harvey, which devastated the region nearly three years ago, rattled people, causing many to take more precautions than they might have in the past with a storm approaching.

"I'm a little nervous, but you've gotta be prepared, especially when you're living by the water," Ramirez told Wadell. "When it gets to hurricanes, you start to worry," she said, adding that's when she activates a plan "in case we need to get out of here." 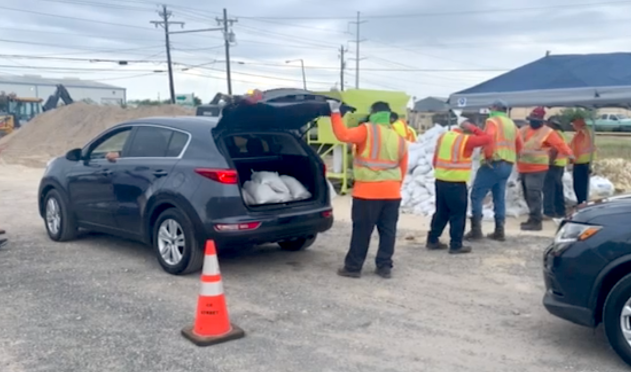 Residents in Corpus Christi, Texas, fill up the trunks of cars with sandbags in preparation for the arrival of Hanna on Friday, July 24, 2020. (AccuWeather / Bill Wadell)

Hanna’s formation as Gonzalo continued to churn as an active storm in the Atlantic was fairly unusual during the month of July. It has been a couple of years since there were two simultaneous named storms in the Atlantic — the last occurrence happened in July 2018 when both Beryl and Chris swirled across the basin, according to Philip Klotzbach, a tropical meteorologist at Colorado State University.

There have been other active tropical storm duos in the Atlantic since 2000, including Cindy and Dennis in 2005, Franklin and Gert in 2005, Bertha and Cristobal in 2008 and Cristobal and Dolly in 2008. Additionally, Dolly from 2008 was the last tropical storm to make landfall in the Lone Star state during the month of July, Klotzbach said. More recently, Bret and Cindy were both active storms in the Atlantic during the 2011 hurricane season.

Three tropical storms that proceeded Gonzalo -- Cristobal, Edouard and Fay -- had also been the earliest storms of their respective letters.

And over in the Pacific basin, Hurricane Douglas, the Western Hemisphere's first hurricane of 2020, had exploded to Category 4 strength by Thursday night and was packing 130-mph sustained winds. Douglas since weakened to a Category 3 storm with 115-mph winds as it charged toward the Hawaiian Islands. AccuWeather meteorologists expect Douglas to weaken considerably before impacting Hawaii. But, the storm added to what is a stunning satellite image showing just how busy the tropics were during the third week of July. Douglas, Gonzalo and Hanna were all visible in one shot on an AccuWeather radar image.

To stay up to date on the busy hurricane season, visit the AccuWeather hurricane center for all tropical weather information and news, including the next names on the 2020 Atlantic list.