Fence gets torn off by Hanna's fierce winds

Hurricane Hanna made landfall in Padre Island, Texas, on July 25, with winds of up to 90 mph. It was strong enough to tear this roof off in Port Mansfield.

Most people in South Texas consider tropical storms "a part of life" but lingering memories and destruction from Hurricane Harvey, which devastated the region nearly three years ago, encouraged residents to take more precautions than they might have in the past with a storm approaching.

Ahead of Hanna's landfall, AccuWeather National Reporter Bill Wadell spoke with Lori Ramirez, a Corpus Christi native who recently moved back to the area and was worried about the storm.

"I'm a little nervous, but you've gotta be prepared, especially when you're living by the water," Ramirez told Wadell. "When it gets to hurricanes, you start to worry," she said, adding that's when she activates a plan "in case we need to get out of here."

Now that Hanna continues to unleash life-threatening flooding, it's a good thing that most residents took the time to be prepared. 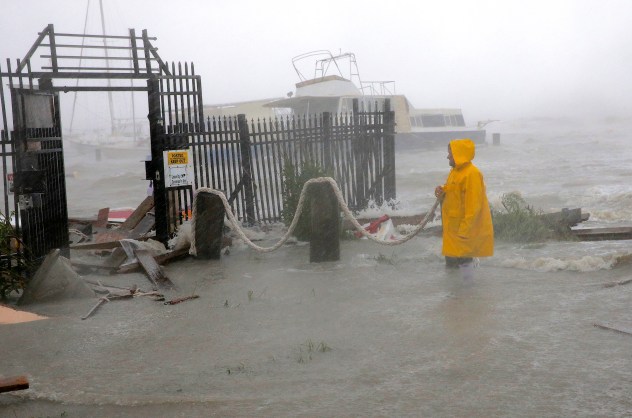 Jame Rowles examines the damage after the docks at the marina where his boat was secured were destroyed as Hurricane Hanna made landfall, Saturday, July 25, 2020, in Corpus Christi, Texas. (AP Photo/Eric Gay)

On Sunday morning, a tornado watch was issued for most of South Texas that included more than 2.2 million people. Earlier Sunday morning, more than 280,000 customers across South Texas were without power as the storm continued to inundate the area. Outages starting to dwindle as Sunday progressed, with a little less than 100,000 customers without power by Sunday night.

Hanna’s powerful storm surge of around 5 feet inundated Padre Island and collapsed a sizable portion the famous Bob Hall Pier early Saturday. With the pier being one of the most popular piers on the Texas Gulf Coast, Nueces County Judge Barbara said the county will do everything in its power to rebuild it, KRISTV reported.

Hanna was officially classified as a Category 1 hurricane Saturday morning — becoming the Atlantic basin's first of the season. Hanna made landfall on Padre Island, Texas, a barrier island, at 5 P.M. CDT on Saturday, about 15 miles (20 km) north of Port Mansfield, Texas. The hurricane had maximum sustained winds of 90 mph (150 km/h) at the time it roared ashore, according to The National Hurricane Center (NHC).

Hanna bears down on Texas

Flooding over the weekend forced Corpus Christi police to block access to areas in downtown as well as access from North Beach into downtown.

Aransas Pass Police are asking residents not to approach any downed lines. Major roads in Aransas Pass are clear of water, but there is some debris in the area and the ferry going to Port Aransas will remain closed until further notice. Harbor Del Sol Marina in Aransas Pass has severe damage and may be destroyed.

After becoming the first 2020 hurricane in the Atlantic Basin last week, Hanna was also the first hurricane to make landfall in the Western Hemisphere this season.

Even before Hanna's center reached land, its impacts were being felt in coastal communities. On Saturday afternoon, power outages rose past 20,000 along the coastline, according to PowerOutage.us.

Across South Texas, widespread rainfall totals of 4-8 inches were reported across the region over the weekend, with some areas picking up over a foot. 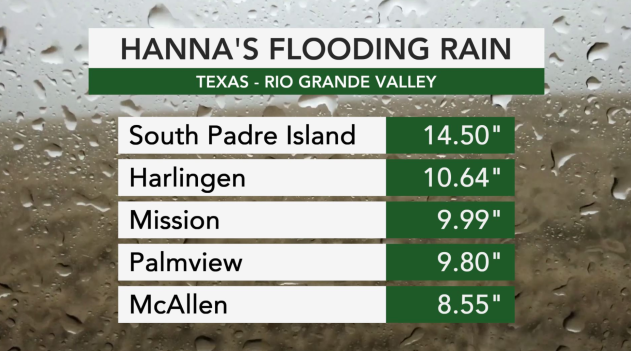 Now that Hanna is over land, it will continue to lose wind intensity and should completely unravel through Monday as it runs into the mountains of northeastern Mexico. However, heavy, flooding rainfall will remain a threat, along with mudslides in the higher terrain.

In Reynosa, Mexico, hundreds of military personnel were deployed to assist in evacuating 410 residents due to flooding late Sunday.

An AccuWeather Local StormMax™ of 16 inches is possible before the rain winds down. 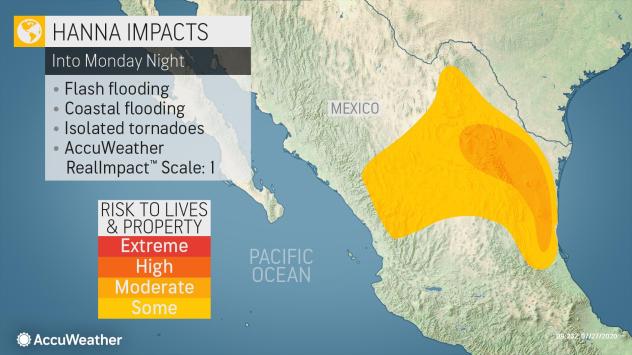 Ahead of Hanna's landfall, AccuWeather National Reporter Bill Wadell was on the scene in Padre Island, Texas, about 30 miles south of Corpus Christi, and he reported seeing "pretty angry" Gulf waters.

Wadell has been in south Texas since Thursday, making his first stop in Corpus Christi, and said conditions quickly started to deteriorate with flooding in low lying places on Padre Island. Tide levels were about five feet above normal, local officials said, and a buoy off the coast recorded a wind gust of 103 mph earlier on Saturday. 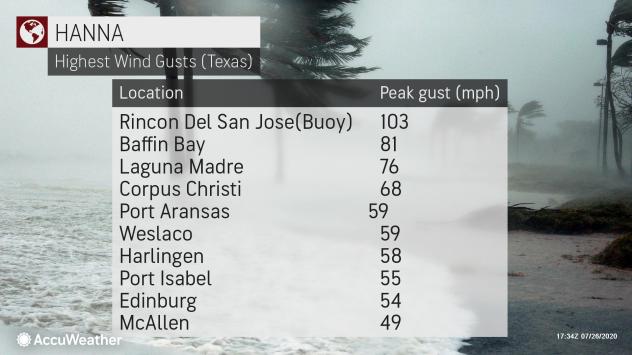 Video footage showed howling winds whipping through the leaves of palm trees a little farther up the coast in Corpus Christi, where a 54-mph wind gust was recorded at Bob Hall Pier on Saturday as the hurricane was closing in on the coast. As the storm churned up the Gulf, a portion of the end of the pier was destroyed from the barrage of heavy surf Saturday afternoon.

Floodwaters from Hanna flooded the first floor of the Art Museum of South Texas in downtown Corpus Christi, and Wadell captured video right as the water was approaching.

Flooding issues in downtown Corpus Christi; Water from the bay is getting dangerously close to the doors at the Art Museum of South Texas. Access roads to the marina are now under water... and #Hurricane #Hanna continues to dump more rain over the coastal bend. #txwx @accuweather pic.twitter.com/sm5q7hlPTb

Hanna's strengthening through Friday prompted officials in Texas to make impact preparations. Tropical storm and hurricane warnings were in effect across a large portion of the Texas Gulf Coast as the storm spun closer to land.

Residents in several south Texas communities were urged to evacuate on Friday ahead of landfall. 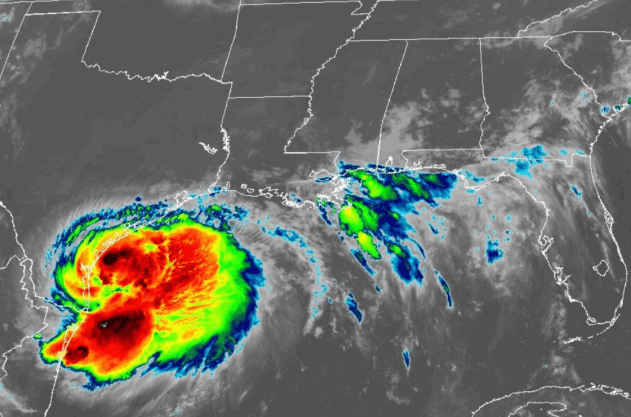 Authorities in Corpus Christi shut down the beaches at noon on Friday ahead of the storm's arrival. Police and lifeguards could be seen ushering people off the beaches there, AccuWeather's Bill Wadell reported. The fire department was preparing crews for swift-water rescues and residents were filling sandbags.

Texas Gov. Greg Abbott had urged "all those who are in the path of this storm to heed the warnings and guidance from local officials before the storm makes landfall." In a statement, Abbott said that "Texas will coordinate with local officials to provide assistance and resources to communities in the area." Abbott was also updating residents on the growing COVID-19 crisis impacting much of his state.

In addition to dealing with Hurricane Hanna, Corpus Christi has seen a rash of coronavirus cases in recent weeks, a troubling trend that's been spreading across the Lone Star State as the pandemic has worsened there.

"Any hurricane is an enormous challenge," Gov. Greg Abbott said in a news conference Saturday. "This challenge is complicated and made even more severe, seeing that it is sweeping through an area that is the most challenged area in the state for Covid-19."

With its formation, Hanna earned the distinction of being the earliest-recorded "H" named storm in Atlantic basin history. Prior to Hanna, the earliest eighth-named storm was Tropical Storm Harvey from 2005, which formed on Aug. 3. The name Harvey was retired after Hurricane Harvey devastated the Houston area with more than 60 inches of rain in 2017.

Hanna formed as Gonzalo continued to churn as an active storm in the Atlantic, which was fairly unusual during the month of July. It has been a couple of years since there were two simultaneous named storms in the Atlantic — the last occurrence happened in July 2018 when both Beryl and Chris swirled across the basin, according to Philip Klotzbach, a tropical meteorologist at Colorado State University.

There have been other active tropical storm duos in the Atlantic since 2000, including Cindy and Dennis in 2005, Franklin and Gert in 2005, Bertha and Cristobal in 2008 and Cristobal and Dolly in 2008. Additionally, Dolly from 2008 was the last tropical storm to make landfall in the Lone Star state during the month of July, Klotzbach said. More recently, Bret and Cindy were both active storms in the Atlantic during the 2011 hurricane season.

Three tropical storms that proceeded Gonzalo -- Cristobal, Edouard and Fay -- had also been the earliest storms of their respective letters.

To stay up to date on the busy hurricane season, visit the AccuWeather hurricane center for all tropical weather information and news, including the next names on the 2020 Atlantic list.