Memorial for loved ones lost to Ian rises amid rubble, despair

A poignant remembrance wall of flowers and other tributes has sprung up in Fort Myers, Florida, one of the hardest-hit communities during Hurricane Ian, offering a rare bright spot amid the grim landscape of destruction.

One after another, they appeared. Carnations, lilies, roses, sunflowers and more. Some brought single stems, some full bouquets. More than a week after Hurricane Ian ripped apart many tight-knit communities of southwest Florida, a touching memorial to those who lost their lives has risen out of the mud and rubble.

A chain-link fence stretching toward the beach in Centennial Park in downtown Fort Myers has been slowly transformed into an endearing collage of flowers and photographs intertwined with heartfelt notes of prayer and love. Children’s drawings and messages also dot the floral landscape.

A steady stream of visitors has made its way to this remembrance wall, a rare display of hope in this grief-stricken area, just to reflect and pay homage to those whose lives were cut short and to those yet to be found.

“It’s gut-wrenching just to see this. This right here is what people need to see, this wall,” Fort Myers native Heather Cox, who lost a pet when the hurricane swept through, told local TV station WBBH. “All these letters. These flowers. It’s emotional. But it shows that people care.”

“It’s just heartbreaking,” she said, scanning the wall of hundreds of flowers and countless tributes left behind.

The death toll continued to climb Wednesday, with at least 131 confirmed United States fatalities blamed on Ian, CNN Newsource reported. At least 126 of those deaths occurred in Florida - most in Lee County, of which Fort Myers is the county seat - making it the deadliest hurricane to hit the state since 1935.

Leo Soto, a Florida artist, started the special tribute wall earlier this week after erecting a similar memorial when a high school friend died in the Surfside condominium collapse in June 2021. Soto had also set up a memorial after tornadoes ripped through Mayfield, Kentucky.

He helped turn the fence into the massive tribute wall that it is today by adding a carload of some 3,000 flower donations. Then came the photos of the missing and those who perished.

He said he’s learned from loved ones at other memorials that flowers help with the healing process.

“You know, a lot of people walk around kind of shocked when a lot of these tragedies happen; they don’t have anywhere to come together and to hug each other and to begin to heal, and that’s what these memorials do,” he added. 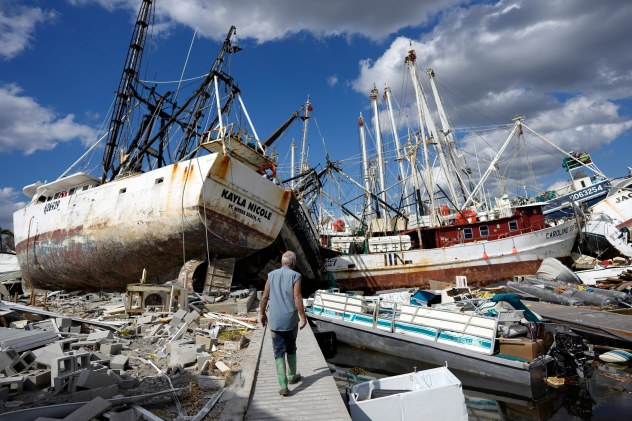 Bruce Hickey, 70, walks along the waterfront littered with debris, including shrimp boats, in the mobile home park where he and his wife, Kathy, have a winter home, a trailer originally purchased by Kathy's mother in 1979, on San Carlos Island, Fort Myers Beach, Florida, Wednesday, Oct. 5, 2022, one week after Hurricane Ian struck southwest Florida. (AP Photo/Rebecca Blackwell)

On Thursday, musician Scott Jackowski visited the memorial and played “Amazing Grace” as people strolled by and went up the wall to take in the pictures of lost loved ones and to read the mementos left behind.

Some of the people trying desperately to hear about the whereabouts of their loved ones have reached out to Soto and sent him photos for the memorial in hopes that someone might have information to track them down. “I have people in the groups that send me pictures. ‘Hey, I lost my papa today, I lost my uncle, will you add them to the memorial? Will you honor them?'” Soto said.

Soto said he hopes others will contribute to the memorial as the communities come together.

So far, that hasn’t been a problem. Businesses in Florida that escaped serious damage from Ian have stepped forward to donate thousands of flowers. Jean Marie Rakich, with Fort Myers Florists and Naples Flowers, contributed hundreds of bouquets to help make the memorial flourish more.

“We need a place for people to come” and reflect, Rakich told WINK-TV.

As one homemade note on the fence reads: “Pray for people living in Collier, Lee, DeSoto, Charlotte, Sarasota and all of the other counties that (sic) were affected by Hurricane Ian, PLEASE!”