The entire state of Florida was put under a state of emergency on Saturday as Ian gradually strengthened and gained speed.

Tropical Storm Ian formed over the central Caribbean Sea late Friday night, and, as AccuWeather meteorologists have been warning since early in the week, it looks increasingly likely that there could be a serious hurricane threat to the continental U.S., particularly for Florida.

Should Ian impact the United States as a hurricane, it would be the first Atlantic hurricane to hit the mainland U.S this season and the first named system to directly impact the East Coast since Tropical Storm Colin in July.

In response to the looming threat of a strike from a hurricane, Florida Gov. Ron DeSantis declared a pre-landfall state of emergency for the entire state on Saturday afternoon. This update follows DeSantis' 24-county declaration late Friday afternoon.

"I encourage all Floridians to continue to monitor the storm and listen to local officials," DeSantis said on social media, encouraging residents to begin preparations for the storm as soon as possible.

Ian is the ninth named storm of the 2022 Atlantic hurricane season. As of Sunday at 5 a.m. Eastern Time, the tropical storm was tracking west-northwest with a forward speed of 12 mph. Sustained winds were up to 50 mph. AccuWeather forecasters said the storm continued to battle wind shear in the area, but that conditions were becoming more conducive for strengthening for the second half of the weekend. 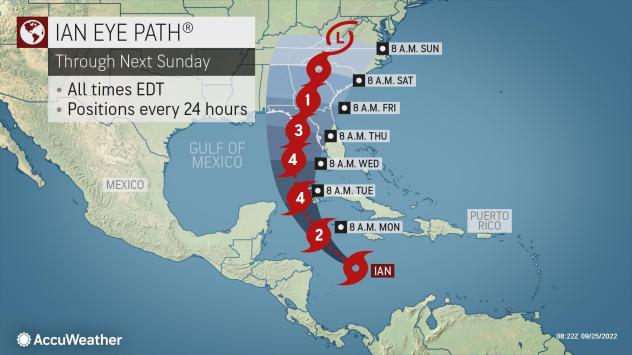 With that in mind, the AccuWeather tropical forecast team is warning of the possibility that Ian could undergo rapid intensification in the days ahead as it churns northward and the wind shear continues to subside.

"Because of very warm waters and a forecast minimal amount of disruptive winds, there is the potential for the system to undergo rapid strengthening anytime from this weekend to midweek," AccuWeather Lead Long-Range Meteorologist Paul Pastelok said.

In the Caribbean, people in Jamaica should prepare for deteriorating conditions in the form of progressively heavier downpours and increasing winds later Saturday and Sunday with a close call, and a likelihood of tropical storm conditions. 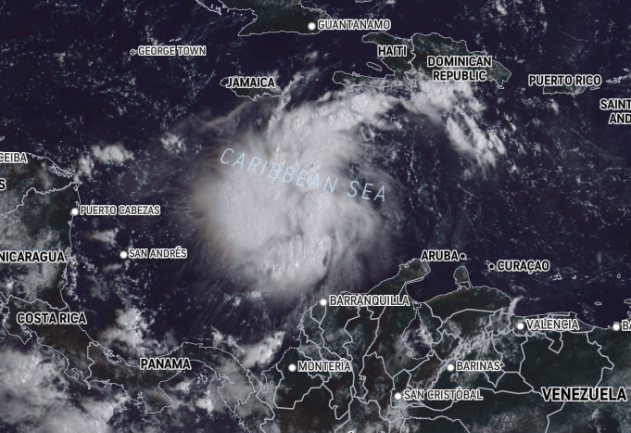 Next in the path of the storm will be the Cayman Islands and western Cuba, both of which could be in line for a direct hit. The Cayman Islands are located to the south of Cuba and will feel the deteriorating effects of the system from Sunday afternoon to Monday. The worst conditions in Cuba are likely from midday Monday through Tuesday, given the storm's projected forward speed.

The system is likely to strike the western part of Cuba as a major Category 4 hurricane, packing wind gusts in excess of 120 mph (190 km/h). 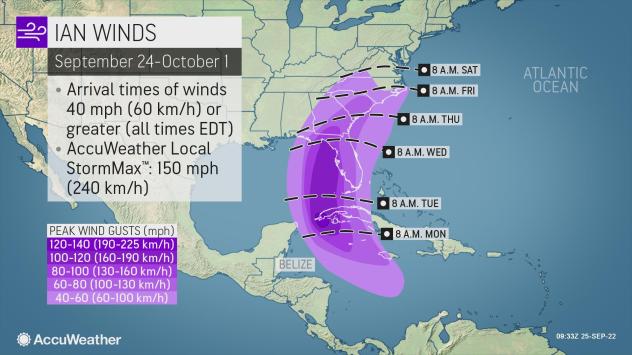 Along the system's path through the western Caribbean islands, there will be the risk of widespread power outages, torrential rain and flooding as well as dangerous and damaging seas. In the Caribbean, the heaviest rain is likely to fall from southwestern Jamaica to part of western Cuba. In portions of Cuba, a general 8-16 inches (200-400 mm) of rain is on the way with an AccuWeather Local StormMax™ of 20 inches (500 mm).

For the anticipated heavy rainfall, damaging wind gusts and dangerous storm surge in the Caribbean, Ian is a 4 on the AccuWeather RealImpact™ Scale for hurricanes.

After striking Cuba, the exact track of Ian across the eastern Gulf of Mexico will be determined by a southward dip in the jet stream across the United States. An area of high pressure that extended from the central Atlantic to the southern Plains of the U.S. Friday will split and allow the system to move northward. That will leave an opening for a southward dip in the jet stream to push the system to the north or northeast, and the speed of that feature will be key in determining the exact trajectory. 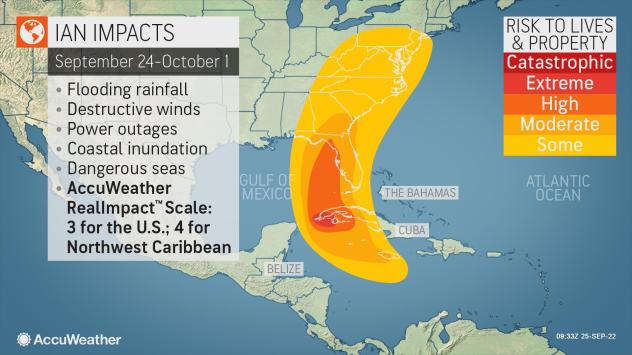 "Since the terrain in the western and central parts of Cuba are relatively flat, the large island may only have a small effect on the overall strength of the storm, which could allow the system to further ramp up once it enters the bathlike waters in the southeastern Gulf of Mexico and/or the Florida Straits," Pastelok said.

Water temperatures from the northwestern Caribbean to the southeastern Gulf and Florida Straits are well into the 80s and even near 90 in some locations.

While there is the potential for the track to shift into the new week, people in Florida should be prepared for a strike by a major hurricane from Tuesday to Thursday this week week. 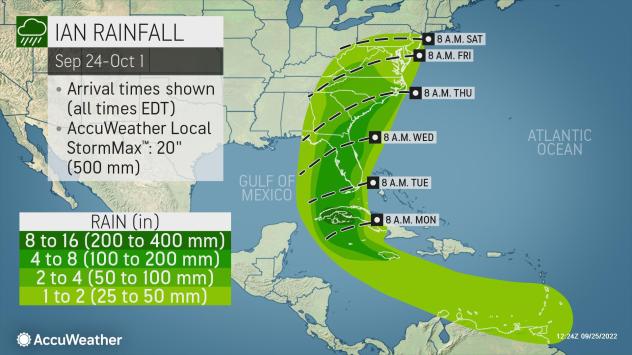 AccuWeather forecasters say that the extent of Ian's effect across Florida and the United States will be heavily impacted by the track of the storm. At this time, meteorologists are concerned that Ian could move northward slowly across the eastern Gulf of Mexico, inundating parts of Florida with days of heavy rain and gusty winds before finally making landfall.

With several days of on-shore winds, coastal flooding could be a severe and far-reaching impact as Ian crawls northward. The persistent threat of storm surge across portions of Florida, in addition to widespread damaging wind and flooding rainfall, Ian is a 3 on the AccuWeather RealImpact™ Scale for hurricanes in the United States.

A hurricane track into the west coast of Florida from this part of the Caribbean isn't especially common, but it has occurred in the past couple of decades. Hurricane Charley originated from the south-central Caribbean and made a hard right turn into Florida after traveling northward across western Cuba in August 2004. Charley struck Punta Gorda, Florida as a Category 4 hurricane. Charley took the lives of more than a dozen people in the Caribbean and the U.S. combined, with damage close to $17 billion. 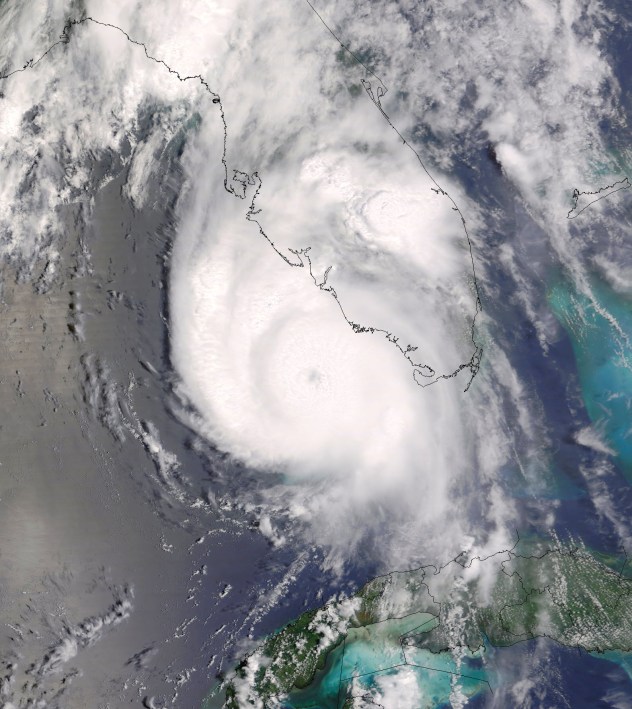 This image of Hurricane Charley was captured as it approached Florida in Aug. 2004. (NOAA)

The burgeoning system is poised to bring yet another surge for the overall intensity of the 2022 Atlantic hurricane season, which was off to a historically slow start through its first three months.

As of Sept. 16, according to Colorado State University (CSU), the 2022 ACE value stood at 31.1 for the Atlantic basin and was dramatically trailing the pace of the 2021 Atlantic hurricane season, which finished with a value of 145.7.

However, thanks to the force and longevity of Fiona, which has racked up an ACE value of 25 and counting through Sept. 23 – the most of any Atlantic hurricane so far this year – the season’s total ACE has catapulted to 57.9. That figure still trails what is considered a normal ACE value, 84.4, through this point of the Atlantic hurricane season, according to CSU, but the developing storm will no doubt add significantly to that total.