A purple sunset was captured during Hurricane Delta by Jonathan Petramala in Louisiana. This phenomenon happens during a hurricane at certain times of the day.

The extremely active 2020 Atlantic hurricane season is just three named tropical storms shy of tying the 2005 record for the most storms to develop in a year, and there is the potential that the placid conditions that have settled into the basin this week could change. As atmospheric conditions become more unsettled, two new systems could brew and spin at the same time in waters just east of North America next week.

A total of 25 systems have reached tropical storm strength or greater so far in the Atlantic Ocean this season, closing in on the record of 28 named storms set in 2005. AccuWeather meteorologists are concerned that not only could one system be named after a Greek letter next week, but now two systems could be on deck.

The next systems to strengthen enough to become tropical storms will be given names after the next letters in the Greek alphabet, which have been used only one other time, in 2005: Epsilon and Zeta. After that, the next storm would be named Eta, a Greek letter that has never been used to name a storm in the Atlantic. In post-analysis after the 2005 season, an originally unclassified system was dubbed a subtropical storm by the National Hurricane Center (NHC), but it was not given a name. 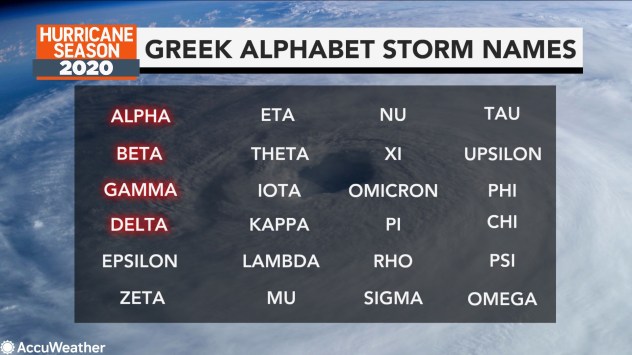 AccuWeather meteorologists are monitoring a currently disorganized area of clouds located just a few hundred miles southeast of Bermuda. Forecasters say there is plenty of room for this system to evolve into a tropical or subtropical system sometime from this weekend to the middle of next week. There is also another system that may develop in the Caribbean that could have eyes for the United States.

"A weakly spinning storm will form first at the middle levels of the atmosphere then may spin down to the surface southeast of Bermuda," according to AccuWeather's top hurricane expert, Dan Kottlowski.

"This feature is forecast to move over warm water and be in relatively favorable environmental conditions for development from Saturday to Monday or Tuesday as it drifts slowly to the south and west," Kottlowski explained. 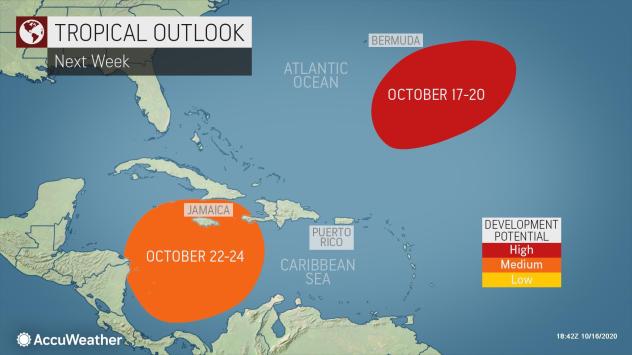 "The window for development may close by later next week as it enters an area of increasing wind shear," Kottlowski stated. Wind shear is the sudden increase in wind speed with altitude and/or the sudden change in wind direction across a horizontal area of the atmosphere just above the ground.

As it continues on a westerly or northwesterly track, the disturbance will approach the East Coast of the United States, potentially coming within several hundred miles. However, a cold front that will be located near or along the Atlantic coast may or may not block the system from closing in on the U.S.

Farther south and west, AccuWeather meteorologists will continue to watch a separate area of concern in the Atlantic as a weather system called a gyre is predicted to develop over part of the Caribbean Sea. 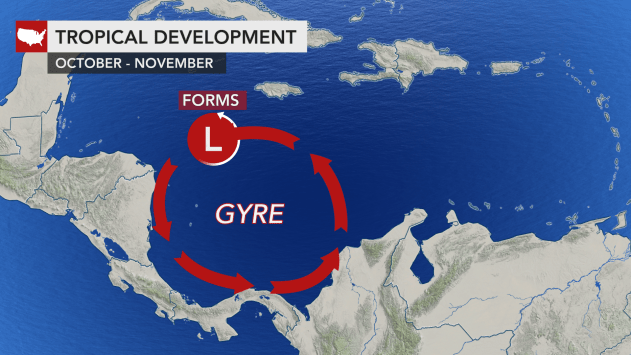 A gyre is a slowly spinning area of low pressure that generates areas of showers and thunderstorms. A gyre itself does not typically evolve into a tropical system, but disturbances that are drawn into the unsettled setup can develop into tropical depressions, tropical storms and even hurricanes.

Such a system could slowly emerge from near the northern coast of South America. "There is a medium chance for this system to become an organized tropical feature toward the end of next week as it moves slowly to the north or northeast over the Caribbean," Kottlowski said. 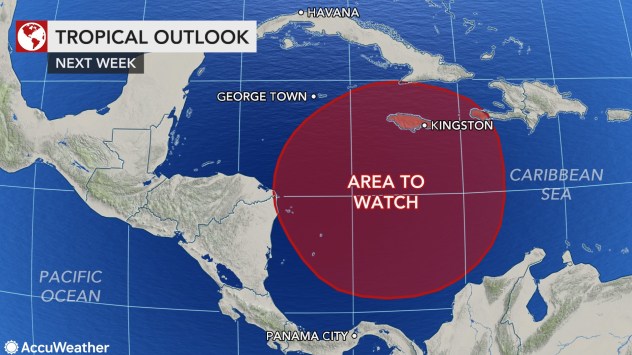 Depending on the exact path that the Caribbean feature takes, which is not certain at this point, there is a chance it could affect Jamaica, Cuba, the Bahamas and possibly the U.S. East Coast, either directly or indirectly, during the fourth week of October. As a result, interests from the Caribbean to the Bahamas and the Atlantic coast of the U.S. should closely monitor the progress of this system.

Given the warm waters and potential for low wind shear, which are favorable conditions for tropical development, in the Caribbean, there is some risk for significant strengthening of this feature before it moves to the north.

Meanwhile, a separate tropical disturbance, known as a tropical wave, will drift westward and cause a pulse of drenching showers and locally gusty thunderstorms through the islands over the northern Caribbean this weekend.

Strong wind shear was affecting the tropical wave on Friday, and continued strong winds aloft and interaction with land are likely to inhibit tropical development of the feature through this weekend.

With another cleanup effort underway, death toll rises in wake of Hurricane Delta
How to ensure the safety of family pets during a hurricane
How to use a generator safely after a hurricane strikes
The weather pattern fueling much of 2020's wild hurricane season

Beyond next week, warm waters over much of the Atlantic basin and the Caribbean are likely to generate additional systems during November and even December. As a result, meteorologists believe there is a high chance that the season could tie or break the record number of tropical storms of 28 set in 2005.

The season already surpassed the average accumulated cyclone energy (ACE) for an entire hurricane season, 105.6, as of the middle of October, with a current value of 123.1. The ACE index measures the intensity of tropical systems over their lifetime. 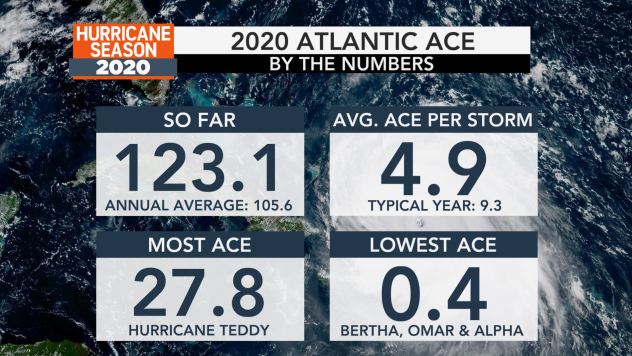