Nesbit, Mississippi, had a little too much rain from Cristobal. Flooding from a nearby creek spilled into this yard on June 9.

Cristobal pushed northward across the Upper Midwest on Wednesday morning, three days after thrashing the Gulf Coast. The was downgraded to a tropical rainstorm on Tuesday evening. Torrential rainfall continued to fall along Cristobal's path -- and all told, Cristobal could travel 2,000 miles from where it originated in the southwestern Gulf of Mexico to where it is heading in the Midwest. 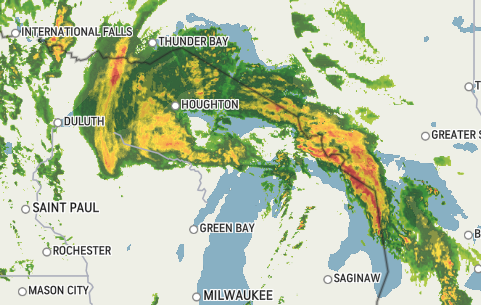 Radar image of Tropical Rainstorm Cristobal over the Midwest as it spreads rain and winds northward early on Wednesday, June 10, 2020. (AccuWeather)

Even though the system has weakened to a tropical rainstorm, it will join forces with a non-tropical storm, and the duo is projected to unleash strong winds and soaking rain across parts of the Midwest.

After some weakening of Cristobal in terms of central barometric pressure into Tuesday morning, a gain in strength is forecast as the system spins across the Great Lakes region and into Canada on Wednesday. 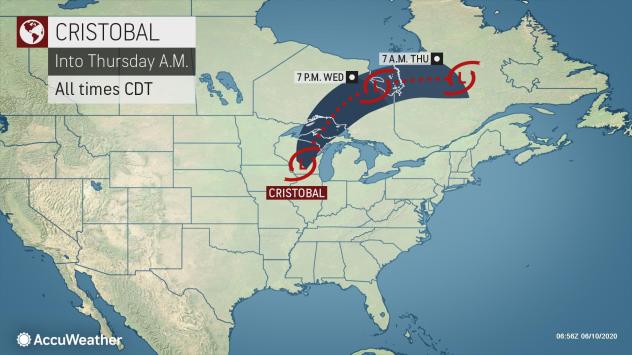 "At landfall, Cristobal had a central pressure of 29.29 inches of mercury Sunday evening but could end up close to 29.00 inches of mercury over the northern Great Lakes and Ontario at midweek," Paul Walker, an AccuWeather forecaster, said.

How low the barometric pressure is in a storm, whether tropical in nature or not, is a good indicator as to its intensity, especially in terms of the winds it can produce.

Meanwhile, strong wind gusts from a non-tropical feature are forecast to rip across parts of the Plains into Tuesday night prior to that system meeting up with Cristobal.

Winds gusted past 70 mph in parts of eastern Colorado on Tuesday. Gusty winds kicked up a considerable amount of dust over the southern Plains as well.

Into Wednesday, winds will ramp up around the Great Lakes region as the non-tropical system and Cristobal merge.

Winds gusted to 53 mph at Champaign and Decatur, Illinois, during Tuesday morning as the circulation from Cristobal passed to the west. Winds gusted to 49 mph at Terre Haute, Indiana.

"Wind gusts may end up being stronger around the Great Lakes at midweek than they were along much of the Gulf coast this past weekend," Dan Kottlowski, AccuWeather's top hurricane expert, said. 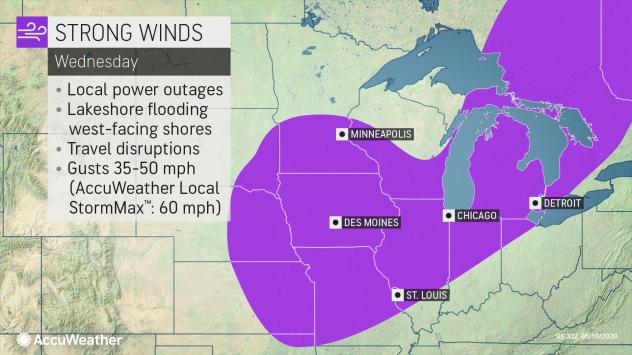 An AccuWeather Local StormMax™ wind gust of 60 mph is forecast in lieu of any thunderstorms around the Midwest through Wednesday. Gusts could approach 70 mph where thunderstorms are involved. For comparison, hurricane-force winds are 74 mph or greater.

Several tropical systems have traveled into the Midwest over the years, according to the National Weather Service (NWS). Most of these had lost or were losing tropical characteristics while arriving across the region.

Two notable storms to survive the trek into the Midwest, Ike and Gustav, traveled well inland and reached the Midwest during September 2008. Both of these former hurricanes transitioned to non-tropical storms as they moved over the region; however, the impacts of these systems were felt widely.

High winds generated by Ike were especially widespread, deadly and destructive over the interior central United States with more than a dozen people killed, damage in the billions of dollars and millions of utility customers without power at one point. Impact from Gustav was much less severe.

Only a few storms that originated in the tropics in June pushed as far inland as the Midwest in recorded history. Tropical Storm Candy in 1968 and an unnamed tropical storm in 1960 are a couple of noteworthy storms to track into the region this early in the season.

Other dissipating tropical systems have trekked into Wisconsin in the past, although Cristobal could track farther west across Wisconsin than any other post-tropical system on record since the mid-1800s, according to the National Hurricane Center.

A storm, known as the Texas Hurricane from 1949, tracked across southeastern Wisconsin as a post-tropical system during October.

Hurricane Ike Caused 7.5 Million Power Outages
Why Cristobal is a rare 'crossover' storm
Why trees topple and what you can do to reduce the risk

Alicia, as a tropical rainstorm, traveled across central Wisconsin, after swinging across western Iowa and southeastern Minnesota.

Still, there are likely to be winds strong enough to break tree limbs, topple poorly-rooted trees and lead to sporadic power outages from Tuesday to Wednesday as Cristobal transitions to a non-tropical feature.

Wave action generated around the Great Lakes, especially on lakes Michigan, Superior and Huron, can be hazardous for small craft and can lead to shoreline flooding and erosion.

Will Cristobal cause flooding over the Midwest?

Since Cristobal is forecast to maintain a steady, swift pace while traversing the middle of the U.S. then southeastern Canada, flooding problems are likely to be far less severe when compared to that of Hurricane Harvey which stalled over Texas in 2017 and unloaded several feet of rain. 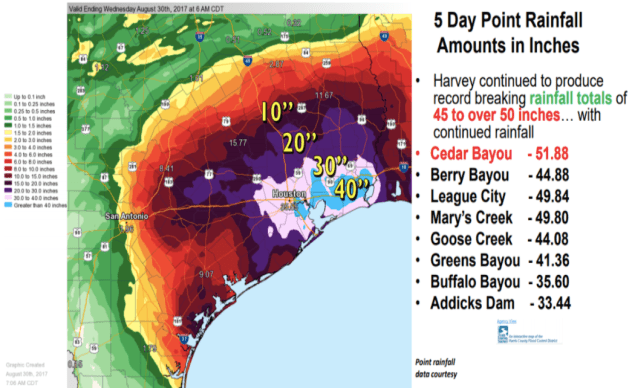 "A general 2-4 inches of rain is forecast from Cristobal with an AccuWeather Local StormMax™ of 6 inches," Kottlowski said. "This sort of rainfall can lead to localized flash flooding and flooding along small streams."

Iowa City, Iowa had a total of 3.70 inches of rain from late Tuesday morning through Tuesday night.

Cristobal's rainfall days after landfall will pale in comparison to that of Harvey's.

Rivers in the Mississippi Valley had been receding prior to the arrival of Cristobal on U.S. soil due to dry conditions during late winter and spring.

Moderate rises along rivers such as the Big Black River in Mississippi and the White River in Arkansas are anticipated due to the amount of rain from Cristobal and the duration of the heavy precipitation. The recession of elevated water on larger rivers such as the Mississippi could be paused by the storm's ongoing rainfall as it pushes farther inland.

People living along unprotected areas of the secondary rivers in eastern Iowa, northwestern Illinois and Wisconsin should also monitor water levels as the rain and runoff begin at midweek.

"The hilly terrain in southeastern Minnesota and southwestern Wisconsin is one zone where the risk of flash flooding will be greater," according to AccuWeather Meteorologist Matt Benz.

Severe thunderstorms from Cristobal could reignite

The risk of severe thunderstorms will exist on the southern and eastern flank of Cristobal into Wednesday. Along with the potential for damaging wind gusts will be the risk of isolated tornadoes and torrential downpours.