Cristobal to race along the Mississippi Valley with flooding rain, damaging winds

After lashing the central Gulf Coast with tropical downpours, tropical-storm-force winds and coastal flooding over the weekend, Cristobal will race northward along the Mississippi Valley and into Great Lakes into the middle of the week.

AccuWeather Meteorologist Tyler Roys said the storm will interact with the cold front moving across the Plains, allowing it to pick up speed. Cristobal made landfall in the southeastern part of Louisiana at 5 p.m. CDT on Sunday. 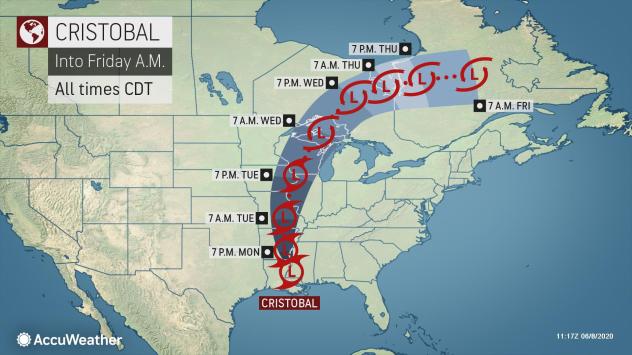 "Even though Cristobal will lose its tightly wound wind field, as it transitions to a rainstorm, strong winds can still occur over a broad area," according to AccuWeather Senior Meteorologist Alex Sosnowski.

This will be due in part to Cristobal's circulation getting caught up in a non-tropical storm set to eject out of the Rockies early this week. As these system's interact and perhaps merge, winds will become strong over a broad area of the Midwest and Great Lakes region.

As Cristobal moves inland, conditions will begin to gradually improve along the Louisiana coast, as areas of heavier rain and thunderstorms drench Arkansas into Monday night.

Cristobal will continue to pick up forward speed on Tuesday and downpours are expected to spread from Missouri to Wisconsin and Minnesota. By Tuesday night, rain will cross the Canadian border and spread across parts of southern Ontario. 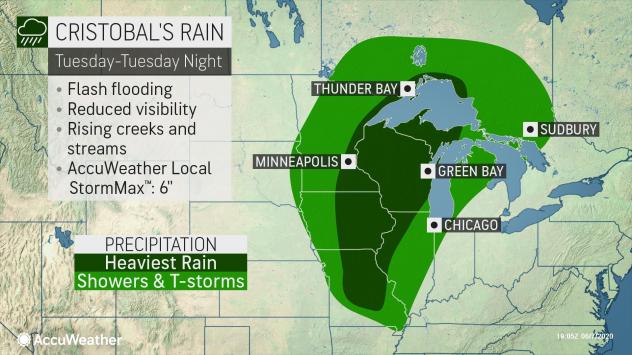 The increased speed of the storm will help to keep rainfall totals lower compared to the central Gulf Coast region. However, the amount of rainfall expected can still be enough to trigger flash flooding.

Two to 4 inches of rain are forecast across much of the Mississippi Valley, with an AccuWeather Local StormMax™ of 6 inches.

According to AccuWeather Meteorologist Courtney Travis, this amount of rain could cause creeks and streams across the Midwest to rise. However, more widespread river flooding may develop in the lower Mississippi Valley later this week or this weekend as runoff slowly flows downstream. 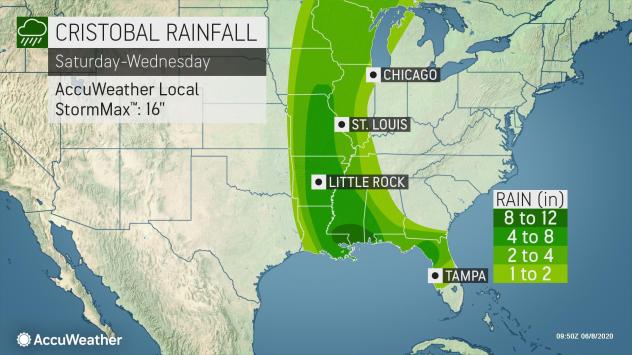 "The quick speed will limit any prolonged impacts compared to if the storm was more slow-moving like it will be in the lower Mississippi Valley," added Roys.

In addition to the risk of flooding, there will be the potential for isolated tornadoes to be spawned where heavy thunderstorms erupt to the east of Cristobal's circulation.

AccuWeather Tropical Homepage
What you should do if you get stuck driving in floodwaters
How dangerous is it for untrained bystanders to perform water rescues?

Winds will begin to howl over a large swath of the region Tuesday into Wednesday, with widespread gusts of 40-50 mph and an AccuWeather Local StormMax™ of 60 mph.

"It will get windy for a 12- to 24-hour period around the western and northern Great Lakes region, likely windy enough to be of concern for small craft due to rough wave action," Sosnowski said while referring to lakes Michigan, Superior and Huron. 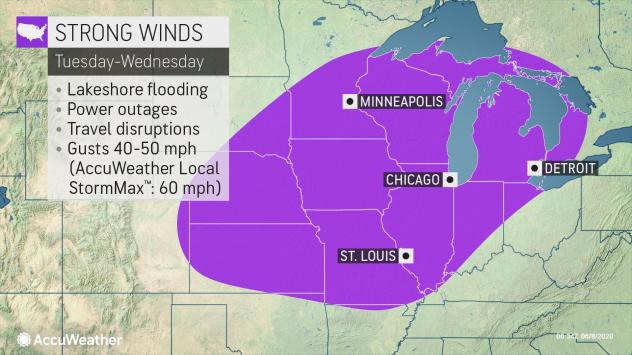 Such strong winds are of particular concern given that trees are fully leafed and the ground will already be saturated, likely leading to an increased risk of fallen trees and power outages.

Because of the record high water levels currently being observed across the western Great Lakes, lakeshore flooding will become a concern on Wednesday as well. Wave heights of 4-8 feet, with some building even higher are possible.

Rain, thunderstorms and gusty winds will taper off across the Midwest late in the week as Cristobal lifts northeastward into Canada.

"The rainstorm portion of Cristobal may make its all the way to James Bay in northern Ontario and Quebec, which is quite rare for a former tropical feature in the late summer and autumn, let alone June," Sosnowski said.