PTSD, anxiety, depression, and insomnia are common after a natural disaster, experts say, with a third to even more than half of survivors experiencing a mental health impact after such a catastrophic event.

EDITOR'S NOTE: This article covers a range of mental health impacts following natural disasters, including mentions of suicide. Crisis hotlines and additional resources can be found at the bottom of the article.

As Hurricane Ian carved through Florida, calls to one mental health helpline skyrocketed.

Collier County's branch of the National Alliance on Mental Illness (NAMI) saw a sharp increase in calls to its "warmline" -- a line usually dedicated to offering early intervention and emotional support to prevent a mental health crisis -- during and since the devastating storm, Beth Hatch, CEO of the Collier County NAMI branch, told AccuWeather.

Even when the storm subsided, the calls to the crisis line continued pouring in.

The weight of Hurricane Ian's emotional toll continues to ring out across the country as communities in the hard-hit areas of Florida slowly come to terms with the loss of loved ones, homes and futures that, for some, are now veiled in uncertainty.

“Everything in the house is a total loss...every square inch of the house [was] full of water,” Orlo Vista resident Damion Johnson told AccuWeather National Reporter Jillian Angeline. Located only a few miles west of Orlando, the community saw intense flooding as Ian cut across the state. In areas along Florida's southwest coast, the emotional weight of Ian's landfall continues to unfold. 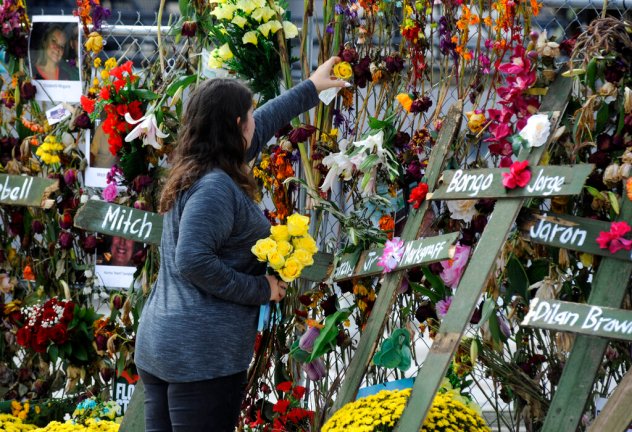 Holly Harmon places a rose into a memorial for victims of Hurricane Ian in Fort Myers, Florida, on Monday, Oct. 10, 2022. More than 100 died during the hurricane, with the greatest number in Lee County. (AP Photo/Jay Reeves)

"It's horrible. As they say, it's like a war zone," Fort Myers Beach resident Alice Barrett told AccuWeather National Reporter Bill Wadell. "Everything that you used to know is gone."

A Medical Examiners Commission report from the Florida Department of Law Enforcement obtained by AccuWeather reported that at least four men took their own lives after viewing their losses. Three of the men had been from Lee County, where Hurricane Ian first made landfall over Florida, and the fourth had been from Sarasota County. All of the men had been 65 or older.

Ian made landfall over Florida as a strong Category 4 hurricane, its powerful winds and storm surge wrecking causeways that connected communities to the mainland, tossing boats ashore like toys and sweeping entire homes off their foundations. The storm surge in Fort Myers Beach, one of the hardest hit locations, was found to have measured at least 15 feet, plus the rough surf and waves, authorities told Wadell.

The rising waters made it nearly impossible for Johnny Two Feathers, a resident of San Carlos Island located between Fort Myers Beach and Estero Island, to escape his own home as flood waters rose to his chest. The wind hurled boats around his home, one anchor taking off part of his roof and the bow of another boat smashing into his walls.

"I'm lucky," Two Feathers told Wadell. "Like I said, this is the worst hurricane I've ever been in." 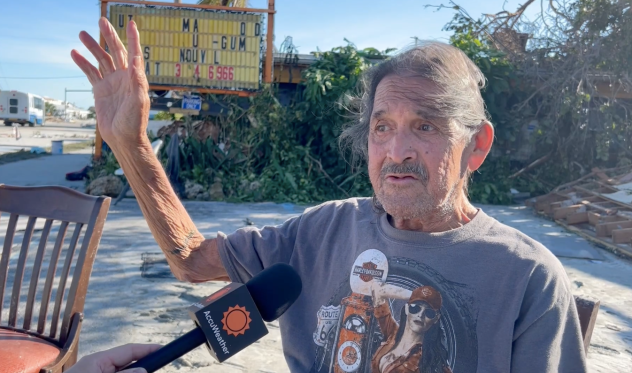 As the number of fatalities continued to mount in the days following landfall, Ian was recognized as not only one of the strongest hurricanes to hit Florida in recent years but also one of the deadliest. With over 100 deaths confirmed and officials continuing to confirm fatalities, Ian is the deadliest hurricane on record to hit the state since the 1935 Labor Day Hurricane claimed around 400 lives.

Symptoms of post-traumatic stress disorder (PTSD), anxiety, depression, insomnia and other kinds of mental health issues are normal following a hurricane, she added.

The state of Florida has a crisis hotline, and the federal government hosts a disaster distress helpline for people seeking crisis counseling following Ian. Hatch and her teams have also been going door to door to check on residents and deliver meals in some instances alongside NAMI's community partners.

"What happens is that mental health is not the priority at first, by any means. It's that survival state," Hatch explained, adding that when basic needs aren't met, it also has mental health side effects. 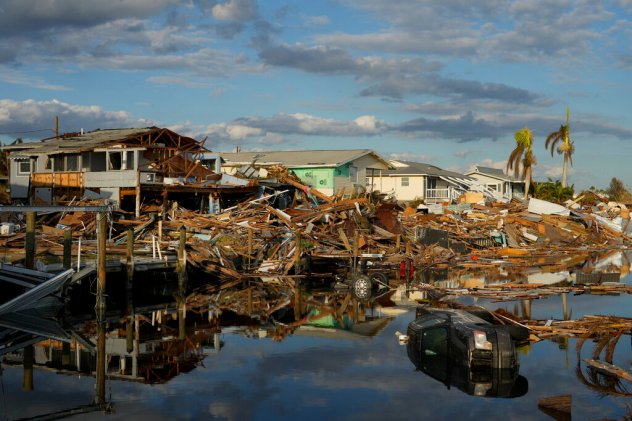 The years following disasters more often than not are characterized by navigating the bureaucracy of disaster recovery aid, deciding whether to rebuild or move entirely and focusing on reestablishing basic needs lost during the storm. Short-term crisis counseling is usually available starting 60 days after a disaster to a year, but then funding typically dries up.

With less accessible resources, mental health is often placed on the back burner.

Suicide rates jumped 26% within just the first year of recovery after hurricanes before returning to the baseline in the second year.

Ian's long-term impact on mental health will vary even among neighboring communities due to the availability of resources, or lack thereof. 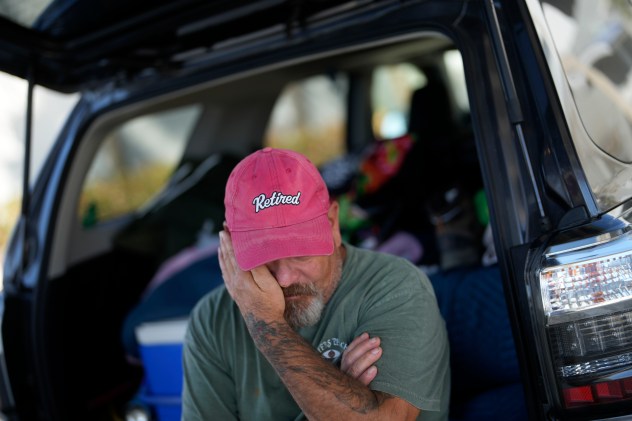 Snowbird William Wellema, who would spend six months a year at his trailer in Red Coconut mobile home park on Estero Island, tears up as he talks about his frustration at not being allowed on to the island to survey what remains of his trailer and recover whatever he can, after Hurricane Ian, in Fort Myers Beach, Florida, Oct. 7, 2022. (AP Photo/Rebecca Blackwell)

Community stigmas surrounding mental health treatment, transportation, language, and finances are a few barriers that may prevent someone from accessing long-term mental health care in addition to mental health facilities not having enough staff to keep up with the demand.

“We must acknowledge that the climate crisis will continue to disproportionately burden and displace the most marginalized communities, including LGBTQ young people who already face higher rates of homelessness and food insecurity, along with experiences of discrimination and barriers to mental health care," Todaro said. "It’s crucial that we address the negative mental health impacts of the climate crisis, and connect our young people with the support services and care they need to navigate this increasingly uncertain world.”

Research over the years has strongly indicated that climate change is contributing to more damaging storms, with rising sea levels likely causing higher coastal inundation levels. Also, tropical rainfall rates, the intensity of storms and the proportion of storms that reach Category 4 and 5 strength are projected to increase due to a warming atmosphere, according to current research. 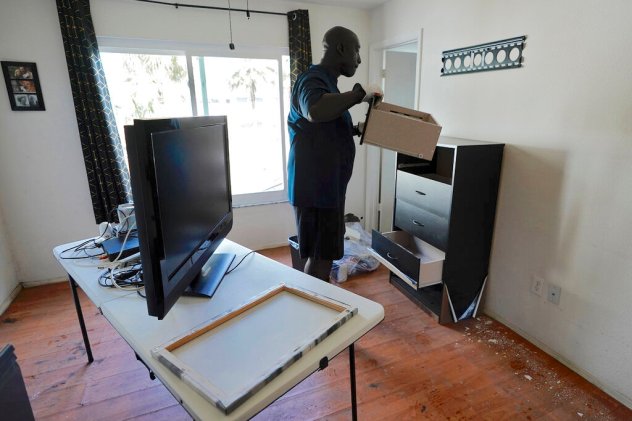 This is not a possibility for the distant future, but rather something scientists have already observed. In fact, a study from 2021 found that at least $8.1 billion of Superstorm Sandy's damages in 2012 were attributed to climate-mediated anthropogenic sea level rise and resulted in an additional 71,000 people impacted by flooding.

"The complex effect of climate change on the behavior of hurricanes carries implications for the mental health and well-being of storm-affected populations," according to the article.

As Ian trekked toward Florida, the cone of uncertainty shifted to include Mexico Beach, Florida, which still bears the marks of Hurricane Michael's landfall as a Category 5 storm. Even four years after that storm, local restaurant owner Michael Scoggins told storm chaser Brandon Clement that the city still wasn't completely back on its feet. He cited the hotels in town that still hadn't reopened, making it more difficult for visitors to stay in town.