Hurricane season is approaching prime time, yet there are only fading hints of tropical development. AccuWeather meteorologists explain why and what they're looking out for. 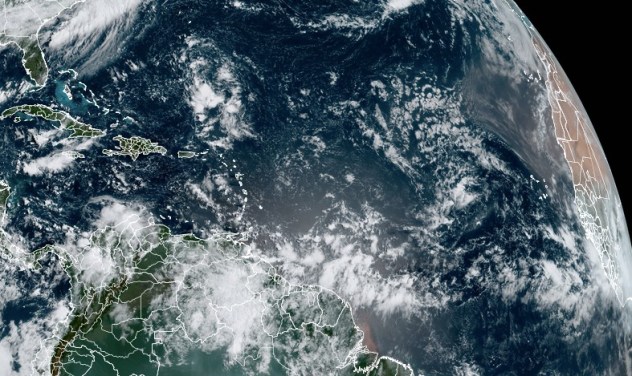 A satellite image shows the state of the Atlantic basin on Tuesday, Aug. 23, 2022.

With a little more than a week remaining in the third month of the 2022 Atlantic hurricane season, there still has not been a single hurricane yet, and just three tropical storms thus far. However, AccuWeather forecasters are keeping an eye on some faint activity that could develop into something bigger over the next week, although chances are rather slim that a hurricane will develop in the near term.

"While we are currently monitoring one weak wave of convection well out in the eastern Atlantic Ocean, conditions aren't projected to improve over the next five days, and tropical development is not likely," AccuWeather Meteorologist Adam Sadvary said. As for what's been preventing any tropical systems from spinning up over the last nearly eight weeks, "Dry, dusty air from the Sahara Desert, combined with unfavorable wind shear has kept the bulk of the Atlantic hurricane season quiet so far," Sadvary explained.

There are tropical waves being monitored toward the end of the month, which, Sadvary said, may lead to an uptick in activity, so it's still possible August will get one last-minute "buzzer beater" system in its final days.

The tropical waves on the AccuWeather forecasters' radar include a feature near the northeastern coast of South America, which could enter the Caribbean Sea later this week. Wind shear was dropping off ahead of that system's path.

"As each tropical wave moves westward from Africa, the tropical environment in their wake leaves behind a slightly more favorable development zone," AccuWeather Senior Meteorologist Alex Sosnowski said. "As this continues through the end of August, it is possible there is some development with the last tropical wave or two of the month." 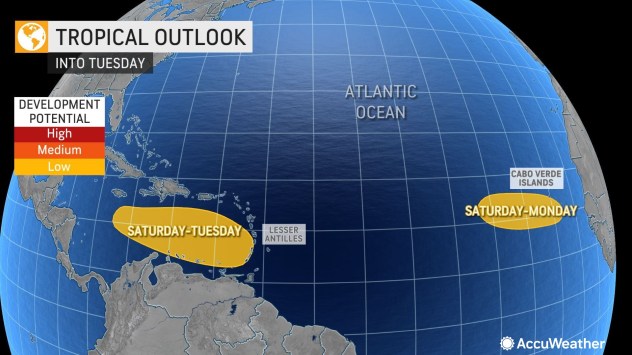 Another area to watch for potential tropical development will be along the southeastern U.S. coast this weekend into next week. It’s in this area that a front is likely to stall which could allow a storm to form at the last minute, Sosnowski added.

Warm sea waters are the most important ingredient for cyclone development, and while many things are to blame for the absence of storms, a lack of heat in the ocean is not one of them. 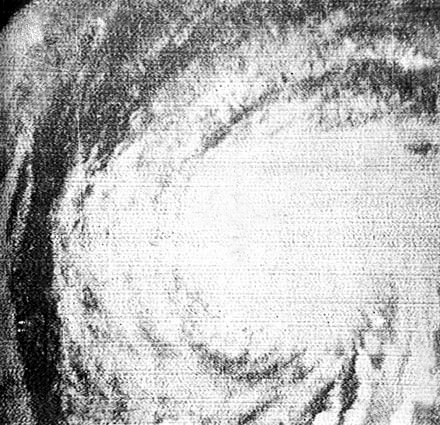 This satellite image of Hurricane Esther was one of the first of its kind, as hurricane satellite imagery started in 1960. (National Aeronautics and Space Administration)

Historically, the early part of September is the peak for tropical activity during the Atlantic hurricane season, which spans from June 1 to Nov. 30. Tropical systems should have a better chance to form next month, Sadvary said, as ocean water temperatures will be approaching their maximum, and the Bermuda high, which typically dictates wind patterns over the Atlantic, should be in a more favorable setup for activity.

So far this year, there have been three Atlantic named storms -- Tropical Storm Alex in early June and Tropical Storms Bonnie and Colin in the first week of July -- but nothing yet for August. This month has been so quiet in terms of tropical activity that it could end up being only the third time since 1961 that there has been a tropical storm-free August across the Atlantic basin.

The year 1961 was an incredibly busy hurricane season, just not in August.

There were 12 total Atlantic storms, eight of which were hurricanes and two of those reached Category 5 force: Hurricane Esther in September and Hurricane Hattie in late October. Esther made landfall in New England, resulting in about $6 million in property damages -- $59 million in 2022 dollars.

1997, on the other hand, wasn't quite as eventful. There were eight total storms, three of them hurricanes and only one was a major hurricane, meaning it reached at least Category 3 strength: Hurricane Erika in September, a Category 3 storm.

Hurricane Danny in July, a Category 1 storm, was the sole storm to make landfall at hurricane strength. Those two hurricanes caused a combined $100 million in damages, $184 million adjusted for inflation, and were blamed for seven deaths.

This season seems even more lackluster when compared to the last two Atlantic hurricane seasons, which were two of the most active in recorded history. Last year's 21 total tropical systems ranks third all time, and 2020 tops them all with 30.