‘This is the worst’: As Ian flooding subsides, a new problem surfaces

It’s been a race against time as Floridians slowly slog through the daunting task of cleaning out their homes, tossing out heaps of waterlogged belongings and contending with their next big problem: the insidious spread of mold.

It reeks of a mildewy muck. Black rings can be seen forming around the light fixtures, and the drywall is soaked in one corner where the roof looks like it was lifted.

"This is the worst," said John Day as he surveyed the magnitude of the water-laden damage Hurricane Ian had wrought on his two-story home on Little Gasparilla Island, a barrier island in southwestern Florida. "I don't know what kind of mold it is, but it looks like black mold and it's covering the entire bathroom ceiling," he told NPR, slowly making his way to the back of the house.

Hurricane Ian dealt a severe blow to hundreds of thousands of homes in Florida when it made landfall Sept. 28 as a churning Category 4 monster of a storm. Storm surges in excess of 12 feet left many houses submerged in feet of water in just a short period of time. And the damage wasn’t exclusive to those living on the barrier islands along the southwest coast. In inland communities, overflowing rivers burst their banks, deluging homes with rushing floodwaters and causing equally destructive damage.

Residents who evacuated came back to a floor-to-ceiling soggy mess of musty-smelling, mold-ridden structures -- all that’s left of what they once called home. They, as well as their fellow Floridians who rode out the hurricane in their homes, are now faced with the daunting task of starting over and the headache of tearing apart the heavily damaged sections.

"The tile floor had this black, slimy mud on them and the carpets -- you walk over them and squish, squish, squish and the smell was pretty bad," Cape Coral resident Jim Sanville told WMTW-TV. "The mold was starting to reproduce."

“Everything that got water is starting to mold,” Jeff Rioux, of the Gulf Coast city of Bonita Springs, told The Associated Press. “We’re cutting all the drywall out, 2 feet up, trying to get things dried out to save the house and to protect it from more damage.” 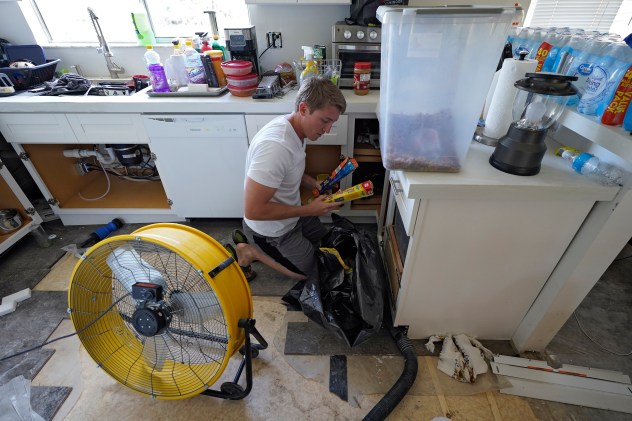 He was thankful for the several days of nice weather following Ian and for the loaned generators to run fans through the house to help stanch the spread of mold.

One thing remains clear: Time is of the essence when it comes to mold, experts say.

All it takes is for a flood-laden house to sit soggy for 24 to 48 hours for mold spores to set in and rapidly flourish undetected throughout the structure – from baseboards to cabinets to even linens and behind the walls, according to the Federal Emergency Management Agency (FEMA). Believe it or not, experts say sneakers and other types of footwear left around the house are often the first places people find mold.

And when it spreads, it infiltrates quickly.

Day said that in less than a week after Ian’s onslaught, at least one ceiling in his house was covered with mold.

“If your home has been flooded and has been closed up for several days, assume your home has mold,” the Centers for Disease Control and Prevention (CDC) says, advising flood victims to “completely dry everything, clean up the mold, and make sure you don’t still have a moisture problem.”

The hot Florida days following Ian's landfall only amplified the problem, as temperatures along the southwestern coast rose into the high 80s: "Days of Florida heat accelerated the development of indoor mold on walls," reinsurance broker Gallagher Re noted in its initial post-Ian assessment report. 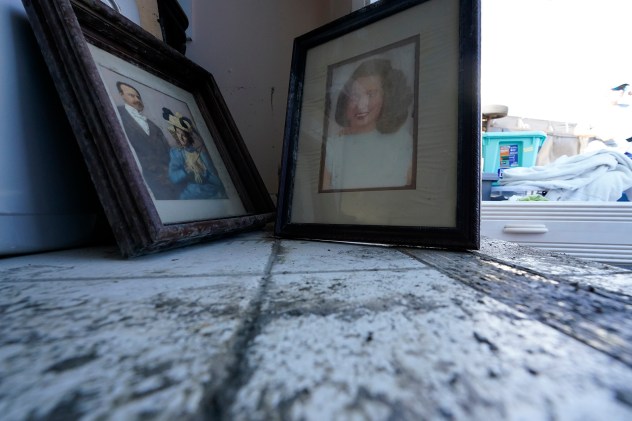 Mud- and mold-caked photos of Cindy Bickford's great grandparents and her mother, that were damaged in Hurricane Ian, are stacked by her doorway, Thursday, Oct. 6, 2022, in Pine Island, Florida. (AP Photo/Wilfredo Lee)

Day by day, more and more heaps of waterlogged carpets, mattresses and other soaked pieces of damaged homes line the streets, according to AccuWeather reporters on the scene.

Alva Sulaty and George Perez waited patiently for their home in the Country Club Ridge neighborhood of North Port, Florida, to dry out from the 2-foot-deep water before tearing out the rain-drenched parts, NPR reported.

Sulaty’s daughter, Tina Krasinski, was helping by sawing through damaged drywall and pulling chunks of wet insulation out of a bedroom wall. She learned how to do most of this from watching YouTube, she said.

"There's a lot of mold," her daughter, Tina Krasinski, told NPR. "We're going to try until insurance comes through, I guess, to make it as livable as possible."

When homes will become fully inhabitable again remains to be seen.

Mold poses serious health risks, and it’s often hard to remove all of the fungi lurking in every nook and cranny of a house, behind walls and underneath floors.

Mold spores in the air can be inhaled and cause allergic reactions, health officials say. According to the CDC, mold can cause coughing or wheezing, burning eyes or skin rashes, while people with asthma or who are allergic to mold may have severe reactions. Immunocompromised people and those with chronic lung disease may even get infections in their lungs from mold. As a basic precaution, health officials warn residents re-entering homes after rising floodwaters have receded to wear proper breathing protection like an N-95 mask. 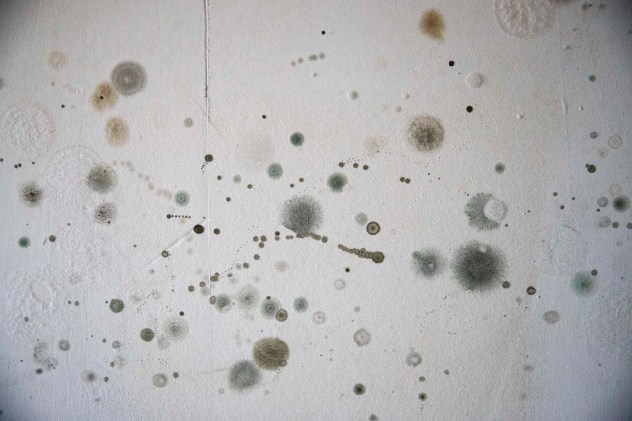 Mold grows on a wall in a home in the aftermath of Hurricane Harvey on Sept. 7, 2017, at the Canyon Gate community in Katy, Texas. (AP Photo/Matt Rourke)

After Hurricane Katrina, CDC inspectors found that nearly half of the homes they inspected had visible mold growth. In fact, mold was implicated in the deaths of four Southern University at New Orleans professors after Katrina.

In an acknowledgment of the growing danger mold poses last year, FEMA expanded its disaster-aid assistance to cover mold growth. Since the start of the program, it has already paid out $142.9 million to 95,000 households, and that was before Hurricanes Fiona and Ian struck. 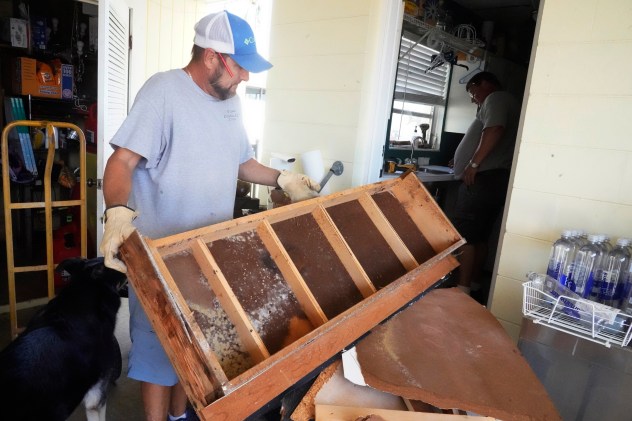 Robert Rioux removes a waterlogged bathroom counter already showing signs of mold from his home, Oct. 3, 2022, in Fort Myers, Florida. Rioux removed most of the walls, cabinets and furniture after his home was flooded during Hurricane Ian. (AP Photo/Marta Lavandier)

The health risks from Ian's scourge prompted volunteer Libby Smith, of Naples, to bring in medical professionals to speak to residents of a mobile home community in hard-hit East Naples about the harmful effects of mold. “We are bringing people out of denial and into reality," Mike Patch, a resident with the homeowners’ association, told the Naples Daily News.

It's all so overwhelming for hurricane survivors to fully process, just weeks after a catastrophic event.

How long it will take Floridians to repair their homes and start anew could be weeks, even months, away.

A tearful Julie Emig looked out over her destroyed property on Sanibel Island as a CNN crew followed. She noticed her Mini Cooper filled with mold and water. "I knew I was going to lose it, but you just look at all of this and it’s like 5 or 6 feet of water in here and it’s like where do we start?” 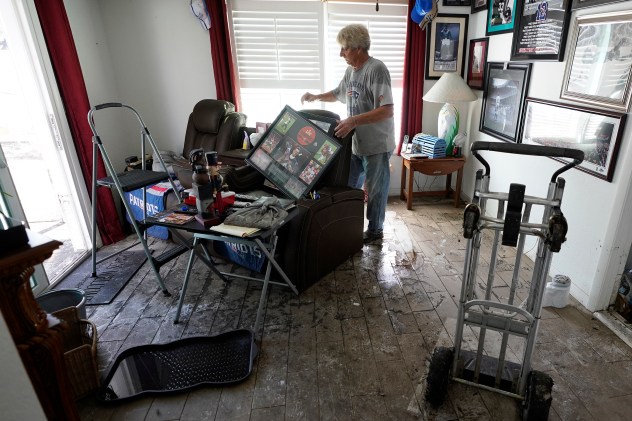 HURRICANE IAN: The Road to Recovery