Proper indoor humidity levels more important now than ever before

Humidifiers are a popular choice to combat dry air indoors during the winter months. Experts say they could also help in the fight against COVID-19. AccuWeather's Bill Wadell reporting.

Much has been made about the dangerous pandemic pathogens flying around the air outside of our personal bubbles this year, but in the cold months ahead, the safety of indoor locations may be a trapdoor to greater risk, experts are suggesting.

Coronavirus cases in the United States have skyrocketed in the recent weeks, and according to Dr. Deborah Birx, a member of the White House coronavirus task force, a round of cold weather may be to blame. Another large factor has been the prevalence of asymptomatic cases, Dr. Birx said, particularly in the under-35 age demographic.

“This virus increased so rapidly because there was an unusual cold snap that began in the northern Plains and went down through the Heartland," Dr. Birx said at a press conference on Thursday. "In the end of September and beginning of October, a large number of people moved indoors. So, we’ve been going across the country and telling the mid-Atlantic states and the Northeast to really increase testing and look for these asymptotic cases." 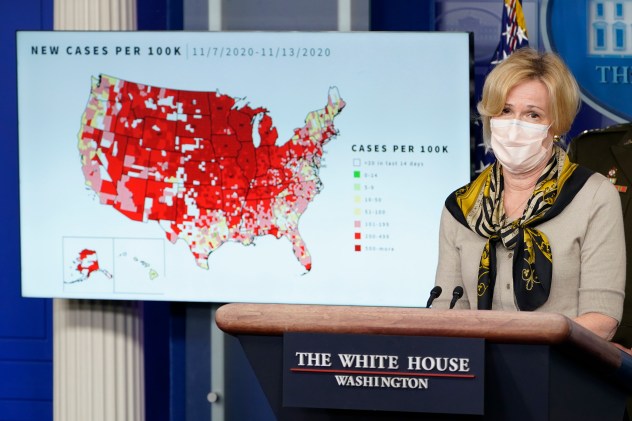 Once indoors, a variety of factors from proximity to temperature to humidity can help increase the risks for transmission. Dr. Joel N. Myers, founder and chief executive officer of AccuWeather, said keeping an eye on humidity, in particular, will be more crucial than ever before this year.

As Dr. William Bahnfleth, an architectural engineering professor at Pennsylvania State University, told AccuWeather earlier this fall, humidifying is a must in order to maintain a proper humidity level indoors this coming cold season -- a step he explained is critical in reducing the amount of potential respiratory irritants.

Myers added that turning on heating units will further dry out the air, increasing the risk of illness. 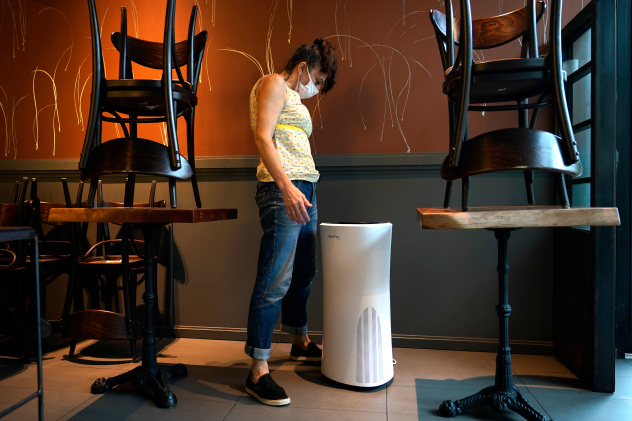 Mama Fox owner Samantha DiStefano looks at an air purifier she'll need when she opens the indoor portion of her restaurant and bar to patrons, Tuesday, Sept. 29, 2020, in New York, as she continues preparation for indoor dining. DiStefano doesn't plan on opening Wednesday, when indoor dining will be permitted in New York for the first time since March, but said she may try serving patrons at tables near the restaurant's floor-to-ceiling windows where diners can have fresh air while eating. (AP Photo/Kathy Willens)

“If it's cold outside, it's very dry and that air gets heated up by whatever heating system you have," he said. "The absolute humidity level stays the same. But relative humidity drops dramatically because warm air can hold a lot more water vapor than colder air."

In the northern Plains last month, a similar setup may have been exactly what led to those increased rates that Birx pointed to. According to AccuWeather Senior Meteorologist Bob Smerbeck, the temporary dip in temperatures could be blamed on cold air diving south from Canada.

"During that time, an upper-level ridge of high pressure strengthened along the West coast and nosed northward into western Canada," Smerbeck said. "This caused the jet stream over central Canada to dive southward into the Upper Midwest, which directed colder Canadian air southward across the northern Plains and the Upper Midwest into Heartland."

As more and more residents crank on their heating units in the U.S., homeowners will want to be more vigilant than ever to ensure their spaces are at a proper indoor humidity level, Bahnfleth said. To do so, people can take measures such as using the AccuWeather Indoor Humidity tool to make sure an indoor space isn't becoming too dry, which can lead to infections, or too moist, which can foster the growth of contaminants like mold.

"When it's very dry, your nasal passages and membranes are dried out," Dr. Myers said. "You’re more susceptible to get any type of cold or virus."