And those are some of the milder effects of excessive heat, which affects our minds just as much as our physical health. Some of the more extreme effects include a rise in violent behavior, and the heat can even trigger depression.

Experts say it’s common for people to get cranky and irritated as temperatures start to rise.

With hundreds of millions of Americans under some form of heat advisory in recent weeks and little relief in sight, it's worth noting that scorching heat can take a toll on mental health as well as negatively impact physical health.

As the calendar moves into what is the climatologically warmest time of year for much of the Northern Hemisphere, a variety of factors can contribute to the feeling of being cranky and irritated during hot weather. Difficulty cooling down and not being able to spend as much time outside for those who use the outdoors as a coping mechanism for daily stress can be two factors that can compound stress during heat waves.

“Almost everybody knows that they get really cranky and really irritated when the heat goes up,” Robin Cooper, the president of Climate Psychiatry Alliance, told AccuWeather National Reporter Kim Leoffler.

Cooper, who operates a private practice and is an assistant professor in the Department of Psychiatry at the University of California, San Francisco, also said excessive heat could be linked to other behavioral issues as well as an increase in violence.

Cooper mentioned several examples, like "kids getting into scrapes on the baseball field, road rage that is simmering during extreme heat all the way up to more violent crimes." She added that excessive heat could also manifest in more internal ways. "There is [an] increase in depression," Cooper said, along with an "increase in what we call mood instability." 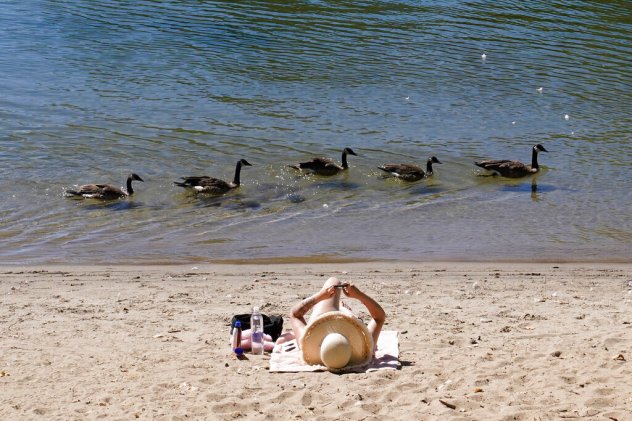 Ducks pass a beachgoer as they float down the American River at Discovery Park in Sacramento, Calif., Wednesday, July 20, 2022. Once again temperatures in California's capital crossed the 100-degree mark. (AP Photo/Rich Pedroncelli)

One of the best ways to combat these feelings, according to Cooper, is to be aware of the weather forecast and have a plan for how and where to cool down during a heat wave.

“You can’t be in the mindset that, 'Oh, it’s a heat wave, it’s temporary, I’m just going to get through it.' No -- heat waves can be killers. Don’t stay in overheated apartments," she said.

Having supplies and devices to help keep cool in your living space will also help combat the mental strain caused by a heat wave. She also suggested ensuring that windows have proper coverings to keep rooms inside from becoming too hot.

In the event that windows lack exterior shudders or inside blinds, people can take inspiration from some of the methods people in the U.K. used during the record-setting July 2022 heat wave. Some of the creative solutions people came up with reportedly included covering windows with tin foil and placing frozen water bottles in various spots around indoor spaces.

Many people have found some consolation in commiserating about the hot conditions on social media, with some expressing fatigue with the hot weather and even a longing for winter, despite the calendar being just a month into summer.

I just can’t wait for this heat to be over .—. Tired of being mad and sweaty

Other users posted about the creative ways they are keeping cool, such as the 7th Regiment Drum and Bugle Corps based in New London, Connecticut, whose members played instruments while soaking in the water.

How was your brass block?😎

The 7th Brass are beating the heat at our fantastic housing site-St. Thomas Moore!

We are leaving tomorrow for our next stop! Help us get there by sponsoring a mile! https://t.co/wYpnYYcJvw#7thregiment #dci2022 #waterblock #7rbrass
📸Serenity Morris pic.twitter.com/ruUSNYIOQM

It wasn't just methods to cool people off in the heat being posted online. Some even shared how their pets are beating the heat this summer, including Dante Smith of Lincoln, Nebraska. Smith shared a picture of his rabbit, Leo, sitting next to a hard seltzer, which Smith joked was the rabbit's "favorite refreshment."

Leo beating the heat by chilling with his favorite refreshment. pic.twitter.com/EFh9RcvTvr

Larger pets were also cooling off in their own ways, such as a Pembroke Welsh Corgi named Fraya in Ontario, Canada. Freya could be seen, in a photo taken by her owner, Jennifer Stuber, after having apparently taken a dip in the cool water along Cherry Beach in Toronto.

"It was her fourth time this summer, twice this week since it has been very warm!" Stuber told AccuWeather.

Beating the heat this week by swimming at the beach. 🌞 pic.twitter.com/YeIy7i0leC

While people and pets have several ways to help beat the heat today, there are some methods that have been used for decades from before air conditioning was even invented. One of these methods was building high ceilings to combat rising heat and forcing it to escape through windows near the ceiling. Here are some other old-fashioned ways people beat the heat before air conditioning.

Ship sunk by ‘incredible storm’ in 1842 discovered in Lake Michigan