The story of what unfolded on the doomed ship that fateful November night is chilling and dramatic, but until now no one had ever seen the vessel at the center of the shocking maritime tragedy.

Kevin and Amy Ailes used research, Google Earth and an underwater metal detector to locate the Milwaukie underneath the Great Lakes.

A shipwreck lost nearly two centuries ago off the eastern shores of Lake Michigan has been rediscovered by a pair of adventurous scuba divers.

The ill-fated ship, the Milwaukie, went down in the freezing cold waters of the lake near the small city of Saugatuck, Michigan, during a blustery winter night on Nov. 16, 1842, that kicked off the wickedly snowy and chilly winter of 1842, according to The Chicago Tribune.

Kevin Ailes and his wife, Amy, who have thus far discovered four shipwrecks in the Great Lakes, became interested in trying to find the Milwaukie and used Google Earth and stories about the ship to make the amazing discovery. 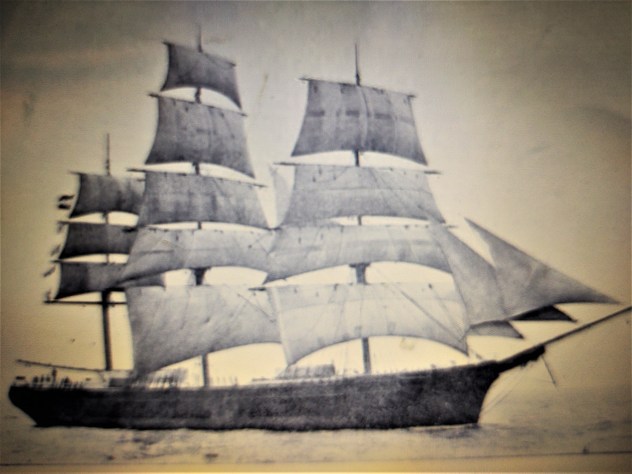 The Milwaukie, which would have looked like the ship above, was the first true "ship,” meaning it has a minimum of three masts, all square-rigged, to sail in the Great Lakes.

Kevin and Amy are both well-trained and experienced scuba divers, something that has helped them in their quest to unearth several ships.

"I was just amazed at what we have here in the Great Lakes, and with a little bit of research, I was able to uncover quite a bit of fascinating items," Kevin said. "It's kind of addictive, the more you look into this stuff, the more tales you hear, you realize that it's fascinating what you can find underwater," Kevin said, adding that he never expected to be able to actually find the Milwaukie.

As the tale goes, the 113-foot-long ship -- the first of its kind to sail Lake Michigan -- left its port at the mouth of the Kalamazoo River bound for Buffalo, New York, and it was carrying 1,300 barrels of flour and 13 crewmen. A number of those on the crew later recalled being worried about leaving port, as dangerous weather was common on Lake Michigan during mid-November, according to the Michigan Shipwreck Research Association (MSRA). 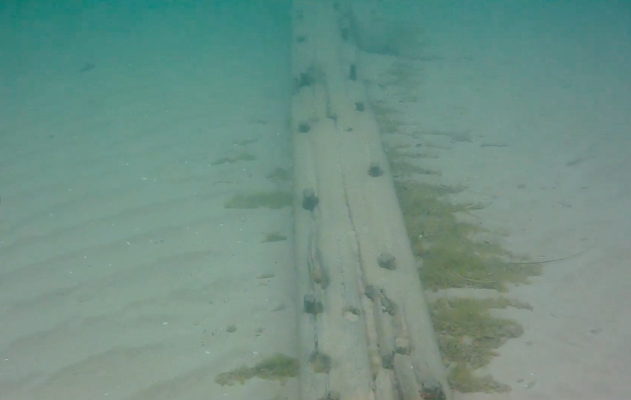 A photograph showing part of the wreckage of the Milwaukie beneath the waters of Lake Michigan. (Kevin Ailes)

The crew was also quite superstitious and apparently noticed rats fleeing the boat in large numbers while it was at port at St. Joseph Harbor. The sailors became worried when an old gray rat followed, an apparent sign that danger might lurk somewhere on the ship, according to MSRA. Nevertheless, the captain decided the boat should depart for Buffalo as scheduled, spawning dissent within the crew.

By the time the boat entered the waters off what is known today as Saugatuck Dunes State Park, the winds dramatically shifted, and temperatures quickly dropped below freezing, putting the boat and its crew into peril. "This was an incredible storm," Kevin said.

At some point, according to research conducted by Kevin, interviews with the crew suggest that a mutiny occurred on board, with the crew going as far as murdering the captain before intentionally running the ship aground.

Regardless of the precise details, the ship's crash was violent and dangerous. Less than half the crew made it off the ship and safely to a nearby lighthouse, with the lighthouse keeper then sending a young man named Henderson to scout the wreckage. Henderson reported back that the boat met its end 2 miles north and about 60 feet offshore of the lighthouse station.

Six sailors survived the incident, with their oilcloth overalls and jackets likely saving them from exposure and the frigid waters as the barrels of flour toppled into the water, according to MRSA. Another nine sailors, including the captain of the boat, perished or were otherwise missing after the incident.

The boat was not recovered, though its stores of flour and wine were picked up by the residents of Singapore, Michigan, which today is a ghost town buried beneath Lake Michigan's sand dunes. According to Kevin, those supplies might have been what allowed the town to survive the vicious winter of 1842, as the wicked weather made it impossible for other supplies to make it there. 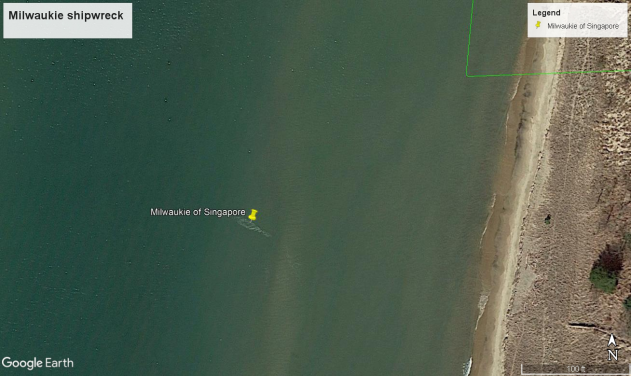 The wreckage was visible on Google Maps in a still satellite image from March 2021. (Kevin Ailes via Google Maps)

"The winter was made much more survivable by the fact they had this wonderful gift of flour on the shore," Kevin said. "I'm sure the wine was helpful, too."

Using the details from the story and technology, Kevin and Amy began combing archived satellite images on Google Earth in the approximate area of the shipwreck hoping to strike gold. Finally, the couple found what looked like the ship just a few hundred feet offshore in an image from March 2021.

"When we got to the site, it was buried; we didn't see anything at all at the site initially," Kevin said. "But I do have underwater metal detecting equipment, a magnetometer, which we took back onto the site and were able to verify [the ship's] existence." 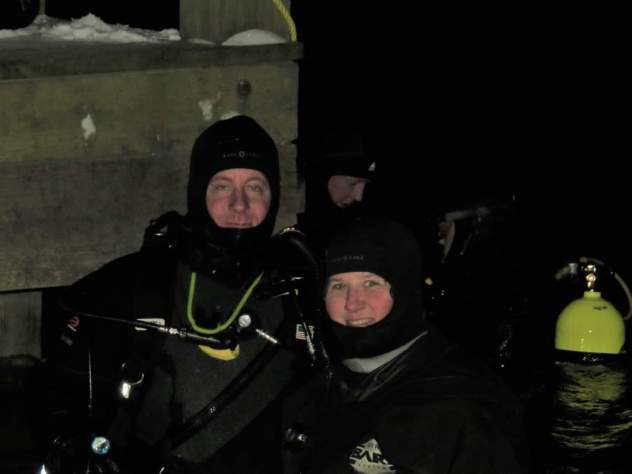 In late May, on another trip back to the shipwreck site, Kevin and Amy were finally lucky enough to be able to see parts of the ship peeking out of the sand and used their scuba experience to snap photos and a video.

"My wife Amy is just, she's part of this here, and deserves every bit of credit that I do. Maybe even more with her putting up with me," Kevin said, adding that she helps plan every mission.

Kevin and Amy have a number of other shipwrecks they are looking into discovering, and they are relatively confident they will unearth their next find soon somewhere in the waters of Lake Michigan.

Correction: A previous version of this story misstated how far offshore the shipwreck was discovered; the distance was hundreds of feet off the eastern shore of the lake, not miles.