Overall, flu and other respiratory virus activity remains "high" or "very high" in about half of the states, with Covid cases trending up over the past few months, according to new CDC data.

Don’t be fooled by the sense of normalcy we’ve been experiencing, new powerful COVID variants are emerging and mutating globally.

(CNN) -- Flu continues to be very prevalent in the U.S., but the first wave of the season -- which swept through the country weeks earlier than usual -- appears to have peaked.

The weeks after the year-end holidays brought sustained high levels of transmission and hospitalization, but flu activity doesn't seem to have spiked as many public health experts cautioned.

Still, even after weeks of improvement, data published Friday by the U.S. Centers for Disease Control and Prevention shows that more than 12,400 people were admitted to the hospital for flu in the first week of the new year, and nearly 9% of lab tests were positive for flu.

About 4% of everyone who visited a health care provider last week had respiratory virus symptoms, including fever plus a cough or sore throat, which is nearly twice as high as the national baseline.

Flu is notoriously unpredictable, and a season can bring multiple peaks of activity.

"It's pretty clear that there was a peak of activity, but that doesn't mean we won't have another one," Lynnette Brammer, lead of the CDC's domestic influenza surveillance team, said last week. "Things could turn around and go back up."

"It's certainly something we're gonna watch really carefully. We're just going to have to keep an eye on all the data, see what viruses are circulating and who's getting sick, and what sort of impact that's having," Brammer said.

"And I want to remind people that if they haven't yet gotten vaccinated, please do so. It's not too late."

Through Jan. 7, the CDC estimates that there have been 24 million illnesses, 260,000 hospitalizations and 16,000 deaths from flu this season.

Although this season did hit earlier than usual, outcomes are within an expected range -- at least so far.

"It's not an unusually high influenza season. It's sort of falling in with the mid- to higher range, but it's within the limits of what we normally expect to see during a regular flu season, unfortunately," Brammer said. "So basically, this is looking like a typical flu season, except in terms of the timing. It was just a little bit earlier than normal." 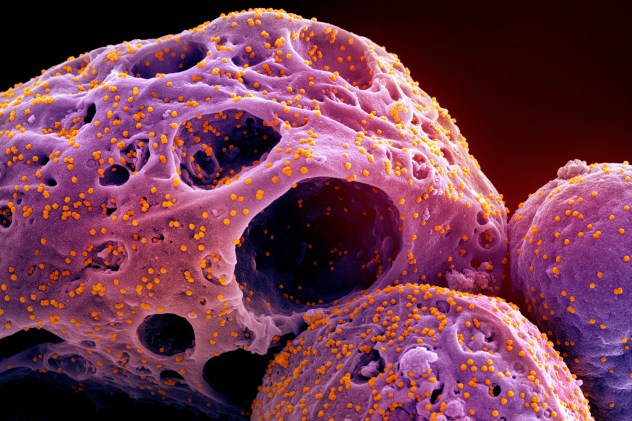 This colorized electron microscope image made available by the National Institute of Allergy and Infectious Diseases in November 2022, shows cells, indicated in purple, infected with the omicron strain of the SARS-CoV-2 virus, orange, isolated from a patient sample, captured at the NIAID Integrated Research Facility (IRF) in Fort Detrick, Maryland. (NIAID/NIH via AP)

Overall, flu and other respiratory virus activity remains "high" or "very high" in about half of states, according to the new CDC data, and the U.S. continues to contend with multiple respiratory viruses that are circulating at high levels.

RSV activity has also peaked in the U.S., reaching a season high in mid-November. But even after a sharp decrease in trends over the past month and a half, weekly hospitalization rates for RSV remain higher than the peaks for most recent seasons.

Meanwhile, Covid-19 activity has been trending up for the past few months.

Hospitalizations have been on the rise since November and have surpassed the most recent peak from this summer, before the updated booster shot was available, federal data shows.

Case reporting has become more irregular over the course of the pandemic, but wastewater monitoring data from Biobot Analytics suggests that Covid-19 activity is higher than it was during the Delta surge, too.

The rapidly growing Omicron subvariant XBB.1.5 now accounts for an estimated 43% of new Covid-19 cases in the U.S., according to the CDC, making it the strain that is causing the most new infections in the U.S.

Just as many thought we were reaching the final stages of the Covid pandemic, a new variant has surfaced.

Notably, it is the only variant that is gaining ground in the U.S.

XBB.1.5 was first detected in New York in October. It grew quickly throughout the Northeast, and the CDC estimates that it accounts for more than 80% of new cases in that region.

From there, XBB.1.5 seems to be picking up steam along the Eastern Seaboard. It now accounts for about half of Covid-19 cases in the mid-Atlantic states and nearly one-third of cases in the Southeast. It is less prevalent in other US regions.

The rise of XBB.1.5 has coincided with an increase in Covid-19 hospitalizations, especially among seniors.

XBB.1.5 has a key mutation that helps it bind more tightly to cells. Experts believe that may be helping it be more infectious.

Still, just 16% of the US population has received their updated Covid-19 booster shot. Data from October shows that people ages 5 and up who had received an updated booster had 19 times lower risk of dying from Covid-19 compared with those who were unvaccinated. Chances of testing positive were three times lower for those who had their updated booster.

Experts: XBB.1.5 may be 'most transmissible' Omicron subvariant to date