Could air conditioners be spreading the coronavirus?

Does air conditioning increase the risk of COVID-19?

As we move closer to summer, more people will begin to use air conditioners which could lead to more people getting sick. Here’s what you need to know.

As the Northern Hemisphere continues its tilt toward summer amid the coronavirus pandemic, the weather outside is not the only factor people should be paying attention to. Experts say the way people manipulate the weather indoors could also be a factor in the spread of SARS-CoV-2, the pathogen that causes COVID-19.

Air conditioning units will soon be challenged with the annual warm-season workload as temperatures continue rising. However, in this unprecedented pandemic era, what if that air conditioner is actually spreading more harm than good?

With people around the world sheltered in their homes, ventilation and filtration have become increased areas of focus in recent months. New York Gov. Andrew Cuomo recently shared a daunting stat that may cause people to reconsider the safety of their own residences.

According to preliminary data from 100 New York hospitals, CNBC recently reported, a large majority of recent coronavirus-related hospitalizations were comprised of patients who were staying at home and not traveling.

“If you notice, 18% of the people came from nursing homes, less than 1% came from jail or prison, 2% came from the homeless population, 2% from other congregate facilities," Cuomo said at a news conference on May 6. He added, "But 66% of the people were at home, which is shocking to us.” 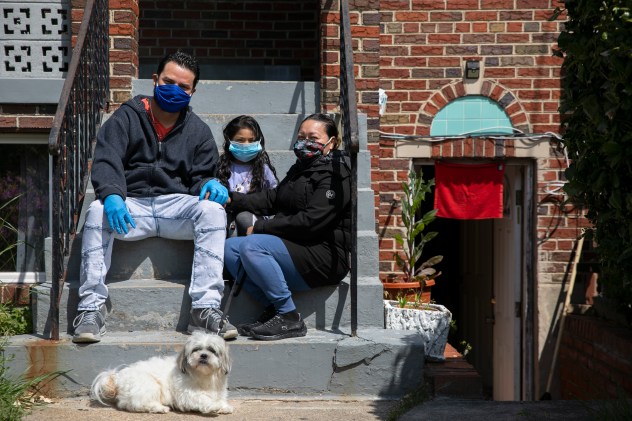 Wearing masks to protect against the coronavirus, Roberto, left, and Janeth, right, sit for a portrait with their daughter Allison, 5, and dog Henry, Tuesday, April 21, 2020, outside their rented basement apartment in Washington. The family has placed a red towel in their doorway hoping that the "angel of death will pass over our home," says Janeth. (AP Photo/Jacquelyn Martin)

The sobering statistics laid out by Cuomo, along with the findings of recent international studies, raise the question: What if being inside is just as dangerous as being outside?

According to air quality expert Dr. William Bahnfleth, while there may not be a simple answer to the question of whether air-conditioning systems are a risk or not, poor ventilation may play an important role in increased transmission.

“The outside air is brought into buildings to dilute contaminants that are generated inside the building,” Bahnfleth told AccuWeather in an interview, adding that bringing outside air into a building is critically important.

“We have standards that specify for different types of buildings how much outside air has to be brought in per unit of floor area and per person into those buildings," Bahnfleth, who is an Architectural Engineering professor at Pennsylvania State University, explained.

"And if there’s no ventilation," the professor continued, then concentration levels of any contagions present in the air "will just keep building up to some point and we’ve seen cases where ventilation rates were documented to be low and there were a lot of infections.”

Bahnfleth specified that this phenomenon has influenced the spread of COVID-19 in several noteworthy instances, including the outbreak at a choir practice in Washington state in which one infected person spread the disease to 52 others back in March. Scientists have referred to that outbreak as a "superspreader event," The Associated Press reported this week.

Another notable case, Bahnfleth said, occurred at a restaurant in Guangzhou, China, during the early days of the outbreak. In January, 10 individuals from three separate families were infected with COVID-19 across three different tables. 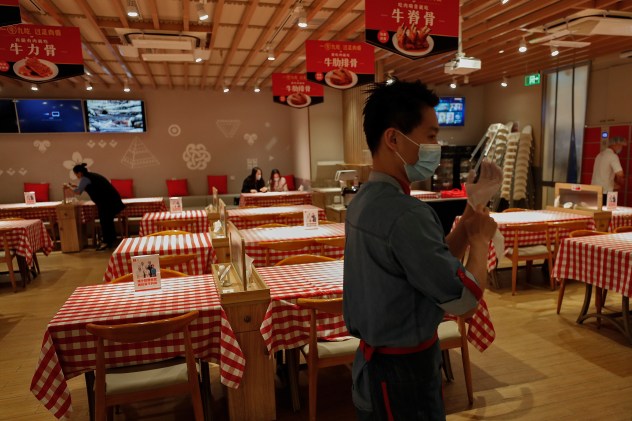 A worker wearing a protective face mask puts on gloves to prevent the spread of the coronavirus as he prepares to serve customers at the Xibei restaurant in Beijing, Tuesday, March 24, 2020. Chinese government is pushing efforts to kick-start the world's second-largest economy and put money in the pockets of workers who have gone weeks without salaries. While most of Beijing's world-famous tourist sites remain closed, the city zoo and parts of the Great Wall are again accepting visitors by appointment, and some restaurants were reopening for business on the condition that customers do not sit facing each other. (AP Photo/Andy Wong)

In analysis from researchers at the Guangzho Center for Disease Control and Prevention, one of the families had recently traveled from Wuhan to the restaurant while the other two families had no other source of exposure. The three families sat on the third-floor dining area for an overlapping period of about an hour. Although there was a meter, or roughly three feet, of separation between each table, all three families shared one thing in common -- an air conditioning unit that spread air across the dining section.

Due to the distance between the tables, the researchers concluded that virus transmission could not have been by respiratory droplet transmission alone and that a stronger airflow would have been needed to spread the droplets.

“We conclude that in this outbreak, droplet transmissions prompted by air-conditioned ventilation,” the researchers wrote. “The key factor was the direction of the airflow."

Monitoring indoor weather factors in public spaces like restaurants is something that could mitigate the transmission risk, the researchers suggested. "To prevent spread of COVID-19 in restaurants, we recommend strengthening temperature-monitoring surveillance, increasing the distance between tables, and improving ventilation.” 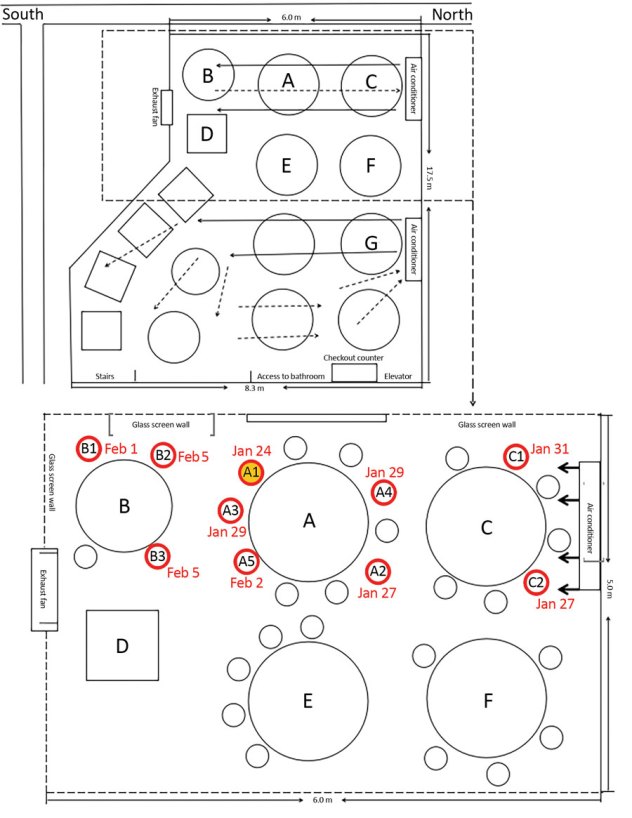 Figures from the research letter written by researchers from the Guangzhou Center for Disease Control and Prevention. (CDC.gov)

The study mainly focused on evidence for probable aerosol transmission of SARS-CoV-2 in the poorly ventilated restaurant. Previously, Dr. Linsey Marr, an aerosol expert at Virginia Tech, told AccuWeather that higher concentration of virus-carrying aerosols in a confined space presents a higher risk of infection.

"In summary, our epidemiologic analysis, onsite experimental tracer measurements, and airflow simulations support the probability of an extended short-range aerosol spread of the SARS- CoV-2 having occurred in the poorly ventilated and crowded Restaurant X on January 24, 2020," the study concluded.

The researchers urged their study suggests that it is crucial to prevent overcrowding in buildings and provide good ventilation. 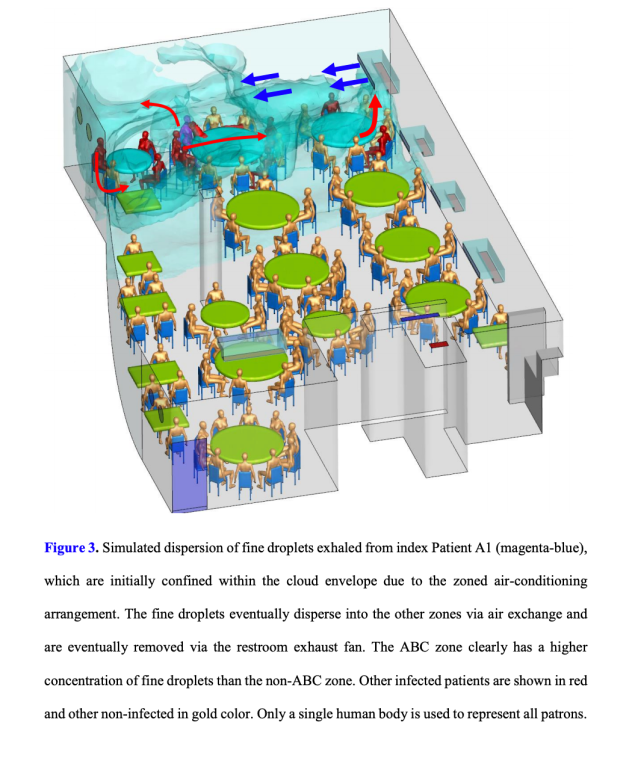 A figure from the published study 'Evidence for probable aerosol transmission of SARS-CoV-2 in a poorly ventilated restaurant' depicting the spread and concentration of the droplets at the Guangzhou restaurant. (Medrxiv.com)

Bahnfleth added that the only open ventilation in the entire restaurant at the time was an exhaust fan in the bathroom and that there was no ventilation supply that could have brought air into the restaurant to decrease the concentration.

Interestingly, none of the other 73 restaurant patrons that day were infected with COVID-19.

As is crucial for residential and commercial buildings, Bahnfleth suggested that proper ventilation could have decreased the concentration of the virus and contaminants and potentially saved those two newly-infected families from infection in the restaurant. 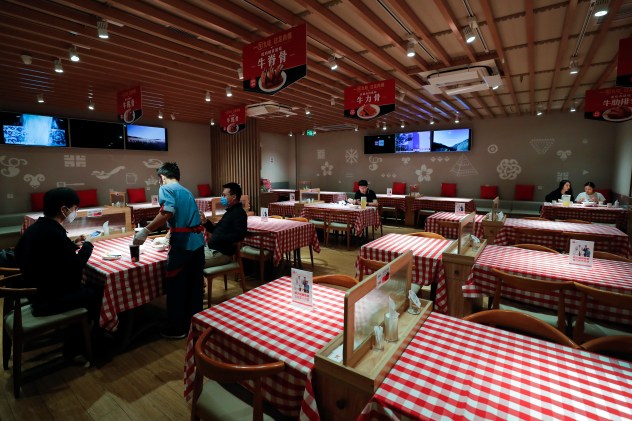 A worker serves customers sitting at a distance at the Xibei restaurant inside a shopping mall in Beijing, Tuesday, March 24, 2020. Chinese government is pushing efforts to kick-start the world's second-largest economy and put money in the pockets of workers who have gone weeks without salaries. While most of Beijing's world-famous tourist sites remain closed, the city zoo and parts of the Great Wall are again accepting visitors by appointment, and some restaurants were reopening for business on the condition that customers do not sit facing each other. (AP Photo/Andy Wong)

“You don’t have to get 100% outside air with no recirculation to have ventilation make a significant effect,” Bahnfleth said. “What we’re recommending is that owners of buildings look at how much they can increase ventilation and still maintain control of the other functions that the system is supposed to perform," he continued. "But you got the other alternatives of putting air cleaners in rooms and just opening windows and getting more air in.”

A key component to successful ventilation and a well-functioning air conditioning unit is an efficient filter. Most residents, Bahnfleth said, may have improperly installed filters or filters that need to be replaced.

Proper air conditioning maintenance could greatly impact the quantity of particulate matter in the air throughout a person's home, he said. 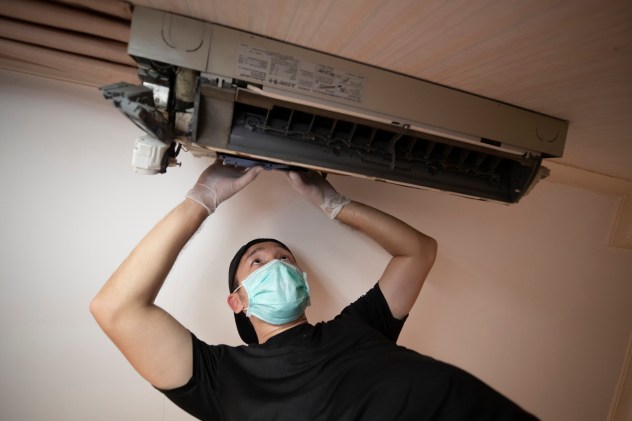 In this April 24, 2020, photo, furloughed aircraft engineer Chutipong Sodvilai cleans air conditioning units to supplement his income in Bangkok, Thailand. Restrictions on air travel imposed on airlines in Thailand have brought a lot of turbulence into the lives of flight and cabin crews, but they’ve been trained to cope with emergencies. More than 200 furloughed staff, facing reduced incomes from big pay cuts, have formed a car and motorbike delivery service, earning vital money and winning fame on the doorstep. (AP Photo/Sakchai Lalit)

“I think that bad filter maintenance has been a widespread problem, and now suddenly everyone has a reason to think about it. It’d be like if you never got an oil change in your car,” Bahnfleth said. “It’s not doing you much good once it’s loaded up.”

While the spike of hospitalizations from indoor residents in areas like New York may not stem from one clear reason, Americans may need to start putting more focus on air conditioning units than ever before, especially as states prepare to reopen.

Within reopening policies, a number of steps will be crucial in order to decrease the virus concentration, including social distancing, Bahnfleth said.

In the Guangzhou restaurant, the separation of tables and distance between dining floors may have prevented even more customers or staffers from infection. While all 91 people in the restaurant were exposed to the virus, the researchers said the lower concentrations of droplets might have been insufficient to cause infection. 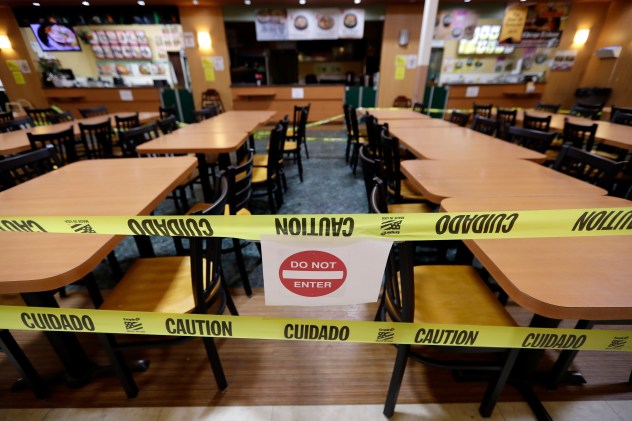 In this April 3, 2020, file photo, the seating area is closed-off at a food court in Assi Plaza during the coronavirus outbreak in Niles, Ill. As state and federal leaders tussle over when and how fast to “reopen” the U.S. economy amid the coronavirus pandemic, some corporations are taking the first steps toward bringing their employees back to work. Retailers, restaurants and mall operators are looking at China’s experience to see how they can reopen stores. (AP Photo/Nam Y. Huh, File)

Bahnfleth said that the same analysis and focus on social distancing should be applied to different types of public spaces in the United States when considering reopening. Regardless of how well ventilated a building is, Bahnfleth said a jammed packed area will always be a risk.

“I think if in those high-density venues you distance people a sufficient amount and you have good ventilation, you may have done a pretty good job of protecting them, but ... someone sitting in a seat at an event may have 10 people within one meter of them, so ventilation is not going to solve your problem if you don’t maintain your distances," he warned.

"We can do as much as we can do about aerosol exposure, but given what we know about the main measure of transmission, other things are probably more important," Bahnfleth said. "If you’re relying on [just ventilation] to protect people who are sitting shoulder to shoulder in an arena, that’s not going to be safe.”

The story has been updated with further information and analysis regarding the Guangzhou restaurant incident.