Summer is still winding down, but AccuWeather forecasters are breaking down how the weather will influence the upcoming allergy season -- and how conditions will create a particularly rough pollen season for some.

Even though the thermometer is still surpassing the century mark in some parts of the country, department stores have stocked the shelves with fall decorations and coffee shops have brought back their famous pumpkin spice lattes. Millions across the United States are likely hoping for the return to cooler weather and fall activities, but the fall allergy season is one thing many Americans would rather put on pause.

As more and more fall festivities kick off, AccuWeather forecasters say fall allergies will be back in full force across some parts of the country, affecting millions.

"Allergies really happen all year round, and the fall is different than spring and summer," Chief Medical Officer at WebMD Dr. John Whyte said to AccuWeather in an interview. "What we see in the fall are allergies to ragweed. It blooms between August and November, so we kind of see that peak pollen actually [occur in] mid- to late September."

According to WebMD, mold and dust mites are two other allergy triggers during the fall. Mold spores love wet spots outside, so piles of damp leaves are ideal breeding grounds for mold. When temperatures drop outside, people will turn the heat on for the first time in months, stirring dust mites into the air that have been sitting around all summer.

Whether it's ragweed, mold or dust mites, these fall allergens can trigger sneezing, wheezing, runny noses and itchy eyes, among other symptoms, according to Whyte.

While the first official day of fall isn't until Sept. 22, the onset of symptoms can begin well before that, and the weather can significantly influence the duration and intensity of symptoms. And, as children are heading back to school, it might be hard to differentiate between COVID-19, the flu or allergies.

AccuWeather forecasters break down how weather, including shorter amounts of sunlight, wind, rainfall and cooler air, can affect allergies during the fall months. 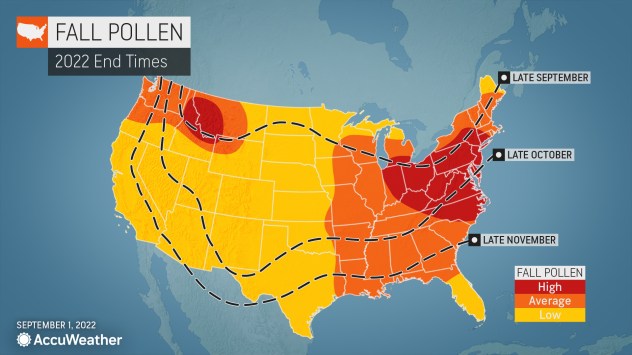 Typically, a hard freeze, which occurs when temperatures drop below 28 degrees Fahrenheit for at least a few hours, ends the growing season for many types of plants and vegetation, swiftly ending the pollen season. However, according to AccuWeather Senior Meteorologist Alan Reppert, the switch to colder weather won't come as early as normal across the eastern third of the country, which is bound to experience a prolonged allergy season as a result.

"We will see the pollen levels really remain high through much of October and even into parts of early November, just due to the lack of temperatures dropping below freezing," Reppert said. Warmer weather will allow plants and weeds to continue to thrive.

While the Northeast has suffered from drought throughout much of the summer, AccuWeather forecasters warn a pattern change in late September and October will bring an increase in moisture, which will fuel rain across the Northeast, washing away any drought concerns. However, with the renewed moisture, conditions will flourish for the growth of mold and ragweed.

"In the East, it looks like it will start off slow just because of the lack of moisture, especially in September," Reppert said. Ragweed-allergy sufferers shouldn’t pack the tissues away just yet though as pollen levels are expected to spike with the increase of rainfall during October.

In the Northwest, the pollen season will start slow before an influx of moisture kicks things off. According to Reppert, things will "ramp up very quickly," resulting in one to two weeks of intense pollen levels across eastern Washington, eastern Oregon and through the northern Rockies.

A lack of precipitation in the Southwest and Plains will be a double-edged sword. Rainfall is needed to help alleviate drought conditions gripping the Western states. On the other hand, the sparse rainfall will hinder the growth of plants and suppress pollen levels. This will result in a lower-than-average pollen season for residents who live from California to Texas and northward to North Dakota. 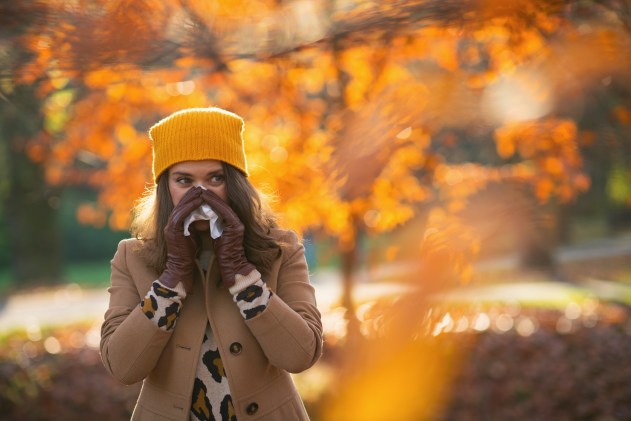 Along the Gulf Coast, residents will face a much different threat: potential strikes from tropical storms and hurricanes. Reppert said tropical impacts could spread from the Gulf Coast all the way up along the East Coast. Rainfall from tropical systems could bring one beneficial side-effect of short-term relief from high pollen levels. However, moisture following any storms can create ideal conditions for mold spore growth.

An average pollen season is anticipated from eastern Texas to Georgia and northern Florida. As is typical, the lower sun angle that comes with the transition from fall to winter will end the growing season and thus help to eliminate ragweed pollen.

According to Whyte, allergy sufferers can use the weather forecast to make smart decisions and prevent a flare-up of symptoms. Whyte recommends avoiding spending time outside on breezy days, as the wind picks up pollen and keeps it in the air. Rainy, dreary days can be beneficial in reducing the amount of pollen in the air but can create breeding grounds for mold.

One thing allergy sufferers can keep in mind is that AccuWeather makes it easy to track the very weather conditions that trigger allergies. Simply navigate to a local forecast page on the website or in the AccuWeather mobile app and look for the "Health & Activities" module. Click or tap on that, and a detailed breakdown will appear, showing a forecast for various types of allergens, as seen in the image below. 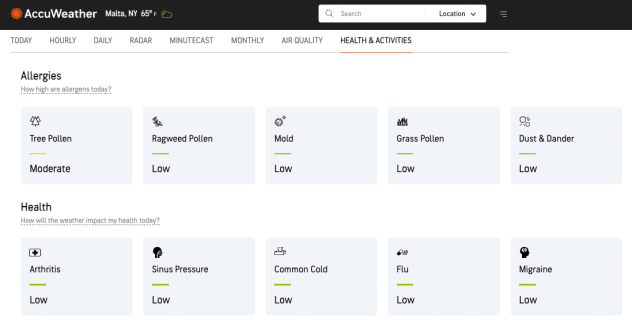 As for distinguishing between symptoms of COVID-19, allergies or flu, Whyte offered up a few symptoms to keep a close eye on.

For people who experience pollen allergies, Whyte recommends keeping windows closed, avoiding contact with their eyes and using air filters in their homes.

There are a number of different types of medications that help alleviate allergy symptoms. Whyte recommends that people should take allergy medicine daily instead of just on the days symptoms are a bother, as it helps keep symptoms under control longer. Allergy sufferers should always consult with an allergist on the best plan for controlling their symptoms.