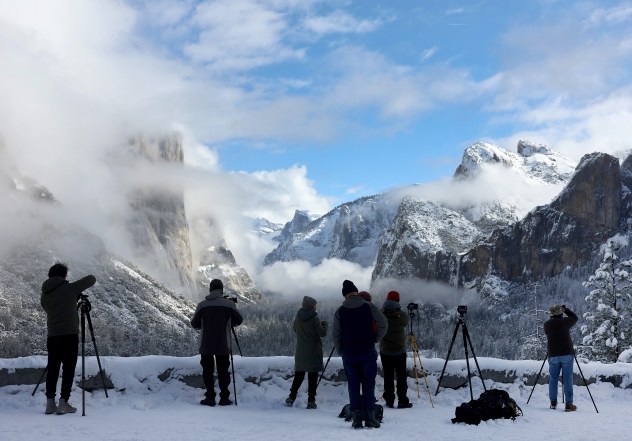 Photographers gather at a viewpoint overlooking Yosemite Valley as clouds begin to clear from the last of a series of atmospheric river storms to hit California on January 19.

(CNN) -- A parade of storms has given the West some relief from its historic drought, replenishing the soil, filling reservoirs and increasing much-needed snowpack. But whether it will be enough to help lift the West out of its multi-year water crisis, experts say, depends on temperatures in the coming months.

Andrew Schwartz, lead scientist at the University of California, Berkeley Central Sierra Snow Lab, has been shoveling huge piles of snow at the lab site. The amount of snow the lab has received has been so excessive that it reached the second floor of their building, which they've since boarded up with plywood, he said.

The snow's been "very exciting," Schwartz said, and he is "cautiously optimistic" that it will go far to alleviate reservoir concerns this year, at least in California.

Across Western states, snowpack has reached more than 200% of normal levels in some places, with record-high amounts in the central Sierra Nevada. What's already fallen there in the first couple of months of winter is what the region usually sees all the way through April 1.

But nearly 60% of the West is still in some level of drought. And as the rain and snow subsided earlier this week, experts now worry how long that white gold will last as conditions get hotter and drier.

"The numbers have been big, but we are still concerned that if we hit a prolonged dry and warm period, we may not end up in a spot that's favorable come March and April," Schwartz told CNN. "So cautious optimism is what we're looking at, as water measurers and managers, because it's been absolutely terrific so far. But we still have several months to get through in the water season."

"These aren't static numbers," he added. "They can easily drop if we see record high temperatures." 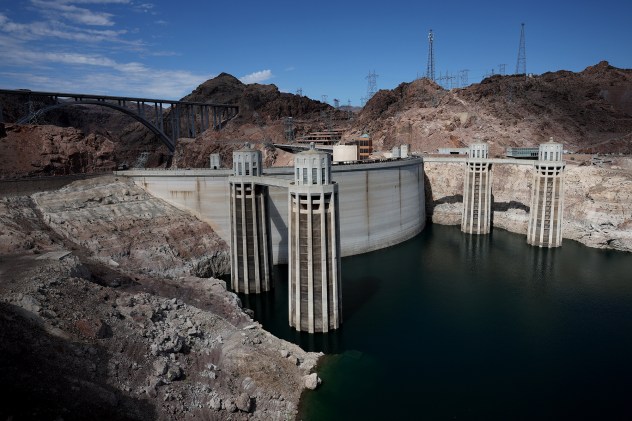 The West's high-elevation snow is a natural reservoir, storing water throughout the cold winter months that then slowly trickles down into rivers and lakes in the spring and summer. But if temperatures start to warm before spring, that melting can start too early.

Snowpack in the Sierra Nevada is critical, because it accounts for 30% of California's freshwater supply in an average year, according to the California Department of Water Resources. The drying Colorado River Basin, which supplies water to roughly 40 million people in seven Western states and Mexico, also relies on snow-capped mountain ranges in Wyoming, Colorado and Utah for replenishment.

But with human-caused climate change transforming weather patterns around the world, cranking up temperatures and making droughts more severe and frequent, less water is flowing into rivers. Record-low water levels in the nation's two largest reservoirs -- Lake Mead and Lake Powell -- have triggered mandatory water cuts for some Western states in the last year.

Schwartz said snowpack in parts of the Colorado River Basin is running above average. But he also said the region is going to need a lot more to make up for a yearslong deficit.

"The entire Western US snowpack is looking quite good right now," Schwartz said. "Will it be enough to fill up Lake Mead or some of these other places that have been decimated? Likely not."

So far, Lake Mead's water levels have risen by a few feet, though Lake Powell has yet to see an increase.

California's recent storms significantly improved the surface drought there. It was only two weeks ago that nearly seven million Californians lived in areas of extreme drought -- the second-worst designation. That number has since dropped to zero.

But Californians have seen this script before, and they know the pendulum can swing back hard the other way.

Just last January, the population in the state under extreme drought fell from over six million to under 20,000 after an extremely wet December. But that didn't last long -- by May, more than 14 million were in extreme drought, nearly half the state's population.

This year's record-breaking, three-week deluge helped replenish some smaller reservoirs, bringing them back to historical averages, but many of the larger reservoirs -- like Shasta Lake and Lake Oroville -- remain below average for this time of the year.

"While precipitation over much of the state was over 300% of normal over the previous two weeks, deficits have been years in the making," Deborah Bathke with the National Drought Mitigation Center wrote in Thursday's drought report. "Historically, long-term drought is interrupted by a period of abnormally wet weather. However, it's too early to tell if the wet weather is enough to end the drought."

Daniel Swain, a climate scientist at the University of California at Los Angeles and the National Center for Atmospheric Research, said one thing that would concern him is if the West sees a series of warmer storms in the next couple months. One of the signatures of a warming climate, he said, is that storms in the region are becoming increasingly warmer, bringing rain instead of snow to higher elevations.

"That could be a problem because we do have such an enormous snowpack right now," Swain told CNN. "Although right now, for the next two weeks, there is absolutely no indication of that at least, so that's good."

Beyond reservoirs, soil moisture has also been high, which is good for groundwater aquifers. But Swain said this moisture will not significantly alleviate the yearslong groundwater overdraft from the megadrought.

"This is not nearly enough, partly because it's a supply and demand problem. We still got a lot of straws in the ground," Swain said. "But you'd need multiple years like this in a row to really move the needle on recharging those aquifers. There's probably some recharge going on right now, but it's unlikely to be the very large amount that would be needed to really make a big difference there."

Climate experts have long said that it's a lack of precipitation, higher temperatures, and an increase in evaporative demand -- also known as the "thirst of the atmosphere" -- that has pushed the West's drought into historic territory.

Swain warned that "thirstiness of the atmosphere" may likely be higher than it used to be, despite this wet year.

"Once things clear out and dry out," he said, "the atmosphere is going to pull a lot of that water back out of the landscape faster than it used to."