A group of genetically distinct polar bears in the Arctic has surprised scientists with its ability to adapt to the effects global warming despite having limited access to sea ice, which is critical in their hunt for food.

Dealing with a decline in sea ice, the bears are changing the way they hunt in order to survive.

June 17 (UPI) -- Scientists have discovered that a specific population of polar bears on Greenland have adapted to hunting from ice that has broken away from glaciers as global warming diminishes their natural hunting grounds on sea ice.

The genetically distinct and isolated subpopulation of bears along Greenland's southeast coast uses the innovative way of hunting to stave off starvation when sea ice isn't available to them.

The researchers from the United States, Greenland, Denmark, Norway and Canada published their findings this month in the journal Science. They said the new information they've learned about this population of polar bears could increase understanding of the animal's behaviors as it faces the increasing threat of global warming.

"We wanted to survey this region because we didn't know much about the polar bears in Southeast Greenland, but we never expected to find a new subpopulation living there," said lead author Kristin Laidre of the University of Washington's Applied Physics Laboratory.

"We knew there were some bears in the area from historical records and Indigenous knowledge. We just didn't know how special they were." 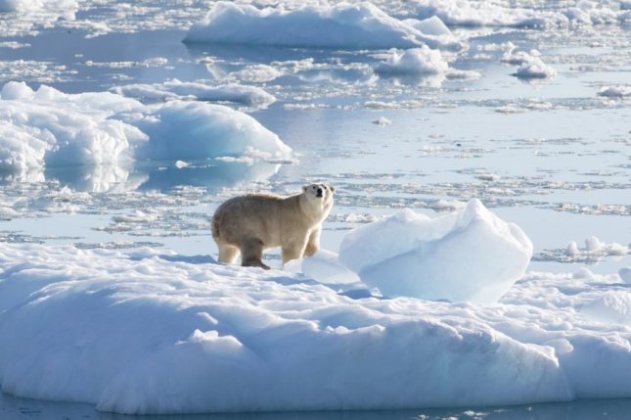 A polar bear walks on glacial ice in Southeast Greenland in 2016. (UPI Photo/Kristin Laidre/University of Washington)

They studied the bears for seven years and combined that new data with 30 years of historical information on the island's wider east coast. The team worked with subsistence hunters in East Greenland, who shared harvest samples with scientists for genetic analysis.

"Polar bears are threatened by sea ice loss due to climate change. This new population gives us some insight into how the species might persist into the future," Laidre said. "But we need to be careful about extrapolating our findings, because the glacier ice that makes it possible for Southeast Greenland bears to survive is not available in most of the Arctic."

Co-author Beth Shapiro, professor and geneticist at the University of California, Santa Cruz, and investigator at the Howard Hughes Medical Institute, said the Southeast Greenland polar bears are the most genetically isolated population of the species anywhere in the world. There are 19 known polar bear subpopulations.

Polar bears rely on ice platforms from which to hunt for food, primarily seals. Sea ice is only available in Southeast Greenland for four months of the year, from February to May. The rest of the year, they hunt from chunks of freshwater ice that has broken off the Greenland Ice Sheet.

Marine-terminating glaciers that regularly calve ice into the ocean could become what the scientists described as a "small-scale climate refugia" -- places where polar bears could survive even as sea ice declines in the coming years.

This region of Greenland, though, currently supports a "few hundred" polar bears, with adult females smaller than bears in other populations. They also have fewer cubs.

"If you're concerned about preserving the species, then yes, our findings are hopeful -- I think they show us how some polar bears might persist under climate change," Laidre said. "But I don't think glacier habitat is going to support huge numbers of polar bears. There's just not enough of it. We still expect to see large declines in polar bears across the Arctic under climate change."

Over 100 killed, millions displaced amid historic flooding in Bangladesh, northern India
NASA rover spots human-made litter on Mars
Texas child dies after being left in hot car, the sixth such death this year
Report a Typo
Comments that don't add to the conversation may be automatically or manually removed by Facebook or AccuWeather. Profanity, personal attacks, and spam will not be tolerated.
Comments
Hide Comments