Snow shovels will likely be needed again this week as there will be more chances for snow as Arctic air remains in place.

A disruptive storm is dumping snow across parts of the interior South and up the Eastern Seaboard to round out the weekend — but it will not be a repeat of the blockbuster storm that shattered snowfall records across parts of the East in early February.

"This snowstorm on the way this weekend is going to be a glancing blow, but still an impactful storm from the mid-Atlantic to the Northeast," AccuWeather Chief On-Air Meteorologist Bernie Rayno said in his Saturday morning Weather Insider podcast.

As of 8 a.m. EST on Sunday morning, snow amounts of 4 or 5 inches of snow were reported in places from Turnersville, Georgia to Millboro, Virginia. By Sunday night, Millboro had 7.5 inches. Parts of Kentucky, including Rock House, had nearly ten inches of snow.

#SNOW ❄️REPORTS-How much did you see in your backyard or neighborhood? We’re closing in on 5“ here at our office in Blacksburg, VA. Another weekend to build a snowman ☃️with roads improving after midday. Refreeze likely tonight. #swva #vawx #ncwx #wvwx pic.twitter.com/dyKJUdINul

Since much of this snow has fallen during the overnight hours when road surface temperatures dip, travel can be hazardous, with many paved and concrete surfaces becoming slushy and snow covered.

Sunday morning, snow was expanding across the eastern Great Lakes and through the mid-Atlantic and into the Northeast.

But, for the snow-weary and those with sore backs from shoveling 2-3 feet of that snow that buried parts of Pennsylvania, New Jersey and New York state this past week, the ongoing storm is not expected to reach the same magnitude.

The amount of snow is predicted to cause travel disruptions, but due to the shorter duration of snowfall, it should be more manageable for road crews to keep up with across most of the Northeast. By Sunday night, parts of New York, New Jersey and Connecticut had 7 to 8 inches of snow. 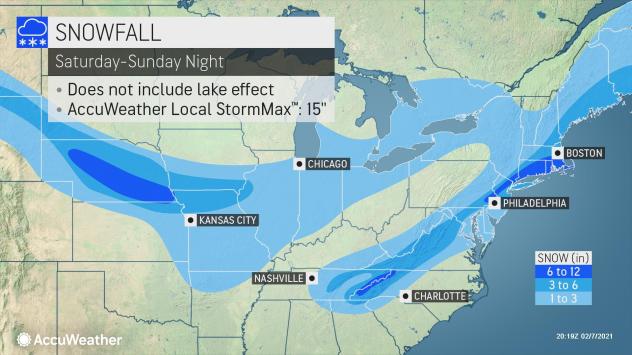 While snow is still ongoing in New England, AccuWeather meteorologists accurately predicted a wide swath of 3-6 inches of snow from the eastern Tennessee and western North Carolinas up the East Coast to southern New England.

AccuWeather forecasters say it won't be time to put away the snow shovels or snowblowers after the weekend storm. There will likely be more opportunities for snow on several occasions over the upcoming week or two as Arctic air will plunge southward from central Canada and sprawl across the central and eastern U.S. -- and an active storm track is predicted to continue.

AccuWeather meteorologists have already been busy monitoring the potential for another storm destined to spread a swath of accumulating snow from parts of the Midwest to much of the Northeast spanning late Monday to Tuesday night.

Major pileup shuts down I-80 in Iowa
Old Man Winter to tighten grip on Midwest, Great Lakes
Harshest cold of the winter on the way for parts of US
How a lack of ice on the Great Lakes could impact weather this spring