The same storm system that caused flooding in Europe and deadly snow in Afghanistan and Pakistan yielded this beautiful, rare view of camels and snow in Tabuk, Saudi Arabia, Jan. 10.

The typically sweltering, sandy landscape of the Saudi Arabian Desert was transformed late last week, with Mother Nature throwing a curveball for residents that led to some confused camels.

People near Tabuk, in the northwest corner of Saudi Arabia about 120 miles from the Red Sea, awoke on Friday, Jan. 10 and looked outside to see a snowy scene, vastly different than the arid weather experienced throughout most of the year.

The higher elevations near Tabuk that were blanketed by the unusual desert snow became popular destinations for locals and tourists in the area, according to local media.

The storm that covered camels in snow and confused the desert wildlife tracked over the region during the latter part of last week.

“A powerful storm tracked from southern Europe and the Mediterranean into the Middle East last week, pulling cold air into the region and resulting in the snowfall,” AccuWeather Senior Meteorologist Eric Leister said. 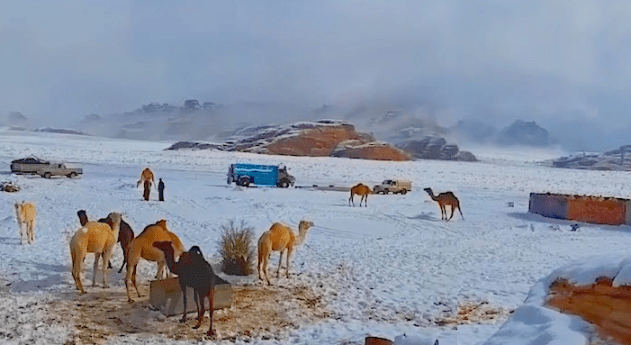 Camels in the Tabuk region of Saudi Arabia saw their typically sandy landscape turned white after a storm dropped snow across the region. (@B_KH_H via Storyful)

Tabuk is one of the coldest areas of Saudi Arabia, according to Leister, with temperatures typically dipping down to 4 C (39 F) during January.

“[It’s] not crazy for them to get snow, it's just typically dry,” Leister said.

Potent winter storm turns deadly as it wreaks havoc across the Middle East Taal Volcano spews lava, ash as fears of ‘hazardous eruption’ persist in the Philippines Man’s desperate message scrawled in snow was spotted by rescuers in helicopter

Most areas only had just an inch or two of accumulation, but it was enough to cover roads, cars and make the landscape resemble that of the Arctic tundra.

The snow caused some disruptions for locals near Tabuk, but the brunt of the storm focused on other parts of the Middle East.