A helicopter was flying over Skwentna, Alaska, on Jan. 9, when it came across an SOS written in the snow, and a man waving his hands. The man was living in a makeshift camp in the remote area, after his cabin burned down.

An Alaskan winter isn't for the faint of heart.

Even with a pantry full of rations, the warmest shelter and the thickest socks, the greatest survival items can still make life a frozen hell in The Last Frontier. But what about when all those items, along with your only companion, are lost in a ball of flames?

"I had no logic. Nothing," Steele told Ken Marsh, a public information officer for the Alaska Department of Public Safety, through glassy eyes at a hangar in Lake Hood, Washington. "I have no words for what sorrow; it was just, just a scream. Just a visceral – not angry, not sad, just, like, that's all I could express – just scream. Felt like I tore my lung out."

On the night of Dec. 17 or 18, Steele can't remember exactly which, a fire stole nearly every possession he had to his name and set off the most tumultuous three weeks of his life. Until his rescuers arrived on Jan. 9, he was forced to fight through some of the harshest conditions the country's coldest state could throw at him.

Steele began his life of solo living in September 2019, sheltering up amid the vast wilderness in Susitna Valley. The region of Skwentna, located about 35 miles northwest of Anchorage, is nestled between three mountain ranges and more known for its world-record sized cabbages than its quaint living conditions.

It was there where Steele, described as a homesteader, positioned himself to live among the rivers and lakes of the forest, 20 miles away from the nearest neighbor. In his shelter, he stored enough food rations to last months and even had a jalapeno plant growing. 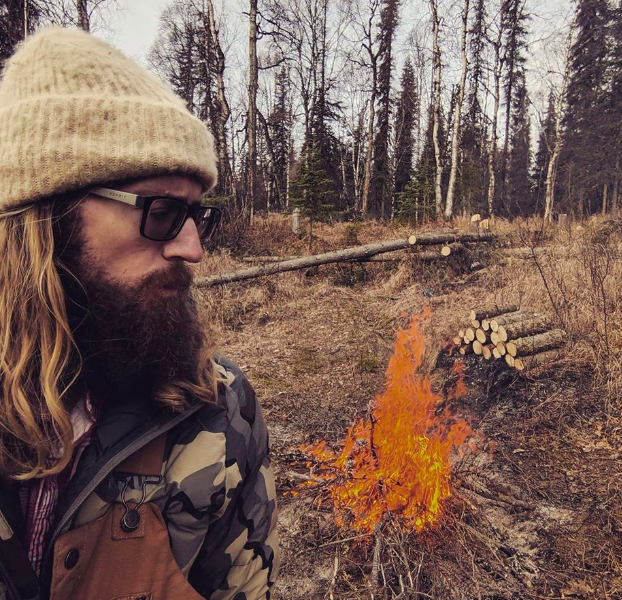 Steele, shown here in a photo posted to Facebook, enjoyed his life of isolation in the wilderness of Alaska. (Facebook/Tyson Steele)

While the plant didn't produce many peppers, Steele said he managed to grow one pepper the size of his thumb that made for a nice Thanksgiving treat.

But it took just one night, in his second month of solo living in Skwentna, to send his dreamy life of solitude up in smoke. One "hasty" mistake, as Steele put it, led to the three craziest weeks of his life.

"I put a big piece of cardboard in the stove to start the fire," Steele told Marsh. "Which I knew was a problem, I've had woodstoves all my life. I knew that you don't do that. So it sent a spark through the chimney which landed on the roof."

AccuWeather reached out to Steele for an interview but did not receive a response prior to publishing.

Steele described his cabin as a plastic Quonset hut, a prefabbed structure he had purchased from a Vietnam war veteran. The tarp-made roof kept things pretty warm, Steele said. On that night of the fire, however, the roof only acted as kindling.

The dripping, melted pieces of plastic roofing woke Steele from his slumber around 1 or 2 a.m., he recounted. After scrambling out of his home, all he could see was his blazing roof.

"So, it starts dripping and it, it goes up into flames faster than, like, I can even imagine," Steele said. "It just, like... smoke everywhere. There's this image that keeps coming back in my mind of a swirling flame coming sideways for my face, you know?"

Before his thoughts raced toward salvaging his home, Steele's focus was locked on his best friend, Phil, a 6-year-old chocolate lab.

"Best dog in the world," Steele said. "So, so happy. I just can't even describe. And then, um, he was so scared of the fire and in my thinking I've gotta grab Phil and I've gotta grab some stuff to sleep in so I basically... I grabbed everything that was on my bed. You know, blankets on my bed. I just grabbed some coats some sleeping bags... and I rush outside, and I tell Phil, 'Get out of here! Get out of here!' And he jumps off the bed, and I think it's good, right? I think he's left."

But just seconds later, as Steele ran to the opposite side of the cabin to grab his rifle, he heard Phil's dreaded howling.

"Inside. And I thought he was not inside. And that's when there was... I was hysterical."

Heartbroken, Steele escaped from the blaze's vicinity when his abundant supply of ammunition, around 500 rounds of bullets and shotgun shells, started exploding in the fire. Explosions continued once the fire reached his food storage and propane tank.

"Honestly, I was grateful that all my bullets blew up, because that could have been a temptation to be like 'I'm not going to make it,' and put myself out, right? That's a very real thought that crept up almost daily, especially on real cold nights," Steele told Anchorage-based KTUU.

After what he described as the longest night of his life, Steele managed to salvage all his canned goods, a jar of beans, a couple jars of peanut butter and a jar of mayonnaise. He had to begin mapping his plan for survival.

"The thing was, maybe half of those cans, they've heated up and popped open and smoke's circulating inside the can," he said. "So, it tastes like my home, just burning."

With a ration strategy of two cans per day, which would last him 30 days, Steele busied himself with the arduous task of survival. The first two nights were spent sleeping in a snow cave. After that came a more comfortable shelter made with scavenged tarps and lumber, built around the location and woodstove of his first shelter.

"Once I got the second shelter built, I kept a fire in the woodstove perpetually," Steele said. "It's not about keeping the shelter warm, because it just basically took the edge off. One night, the 17th night, it was so cold, and I just didn't want to go outside. So I took a bucket to go pee in. And the bucket is only a couple feet away from this fireplace and it freezes, my pee freezes within a few minutes next to the fireplace. That gives you an idea."

According to AccuWeather Senior Meteorologist Brett Anderson, it was around that time, in the first week of January, that the cold became downright painful.

The night of the fire, the temperature dipped to 15 below zero, according to Marsh's report.

Despite lacking any official survival training and the fact that his headlamp died after 10 or 11 days and he only had about six hours of daylight to work with each day, Steele said his extensive time spent outdoors and his familiarity with equipment helped to keep him alive in the bitter cold.

"I’ve just always liked to interface with the environment directly to survive," he said. "I had some matches. And I carried a candle with me – one candle that I found – and that can stay lit. I always had several pieces of birch bark. Birch bark is great for starting fires. And it was also my light quite often in the snow cave. I... just set a piece of birch bark on the fire and it would light up for just a minute and I would be like, 'Oh, yeah!' I could see!"

Steele knew his best hope for rescue would be from the air service. Knowing that his family or friends may call for a plane to rescue him, Steele set out to pave a trail from his homestead to a nearby lake in order to give aircraft a place to land. 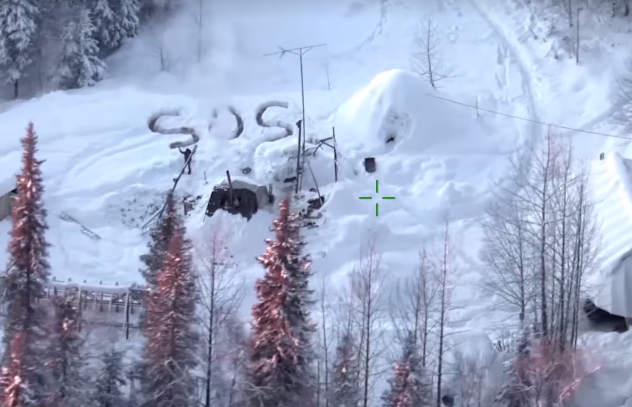 Using ashes, Steele marked an SOS outside his shelter to help alert troopers to his needed rescue. (Facebook/Alaska State Troopers)

Steele stamped out a large SOS by his shelter and used the ashes from what used to be his abode to darken the letters. Steadily falling snow forced him to redo his lettering every few days.

"I figured that was going to be my best signal," he said.

On Thursday, Jan. 9, a friend grew worried after not hearing from Steele and called in a wellness check. Hours later, trooper pilot Cliff Gilliland and tactical flight officer trooper Zac Johnson reached the shelter and found Steele standing by his SOS, waving his arms.

Clutching a McDonald's Combo Meal No. 2, the first meal request he made of the troopers, which includes a double cheeseburger, Steele recounted his survival. He looked healthy and happy, Marsh reported, cloaked with the lingering smell of smoke. Steele declared his next destination would be Salt Lake City, back to live with his family.

But, as he told KUTV in Salt Lake City, he plans to one day return and live again in the unforgiving wilderness in Alaska.

"Next time, I'll build two cabins," he told KUTV while laughing. "Just in case one burns down."