Twin storms to unleash array of weather hazards in central, eastern US

A blast of Arctic air will follow two back-to-back storms that will move from the High Plains to the Northeast this week, forecasters say.

A pair of cross-country storms will take different tracks and bring a variety of impacts ranging from snow, ice and rain from the central United States to the East as the week progresses-- and both are likely to cause their share of major travel disruptions, AccuWeather meteorologists warn.

"We have twin storms this week," AccuWeather Chief On-Air Meteorologist Bernie Rayno said, adding, "They are not identical but more like fraternal twins."

Impacts from the first storm were already unfolding Monday morning as heavy rain and thunderstorms drenched eastern Texas to Alabama.

Severe weather, including the risk of isolated tornadoes, began to unfold from central Texas to central Missouri on Monday night. These volatile storms primarily targeted portions of Mississippi and Alabama on Tuesday night.

On the northern, colder side of the storm, up to half a foot of snow had already fallen across parts of the Dakotas by Monday morning, and more is on the way. The accumulating snow was expanding along heavily-traveled roadways from Montana to portions of Wisconsin and Michigan such as interstates 90 and 94.

At least six people were injured during a multi-vehicle crash on I-94 on Monday amid whiteout conditions, according to Grand Forks Herald. Over a dozen vehicles were involved, including multiple tractor-trailers. 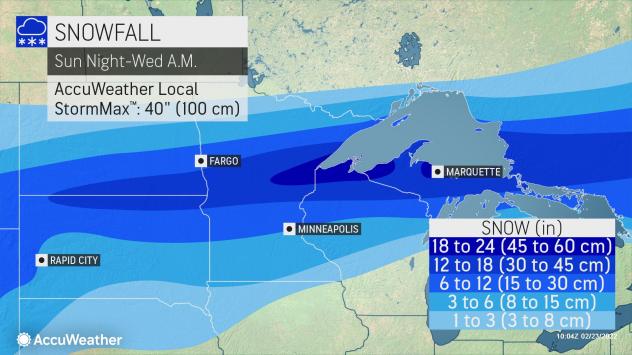 By Tuesday morning, over 20 inches of snow had already fallen in Washburn, Wisconsin, just east of Duluth, Minnesota. By the time the snow came to an end on Tuesday evening, Washburn had received a total of 30 inches of snow. Nearby Ashland, Wisconsin reported 28 inches of snow.

Minneapolis recorded 5.1 inches, while Duluth, Minnesota had a storm total of 10.4 inches.

A zone of ice and wintry mix extended from parts of Iowa and northern Missouri to northern Illinois, southern Wisconsin and part of the Lower Peninsula of Michigan on Tuesday. The icy accumulation is then forecast to spread into northern portions of New York and New England into early Wednesday. 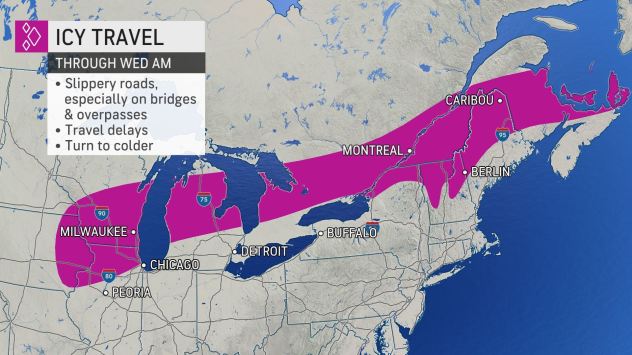 The first storm brought rain from Detroit, Pittsburgh, New York City and Boston. However, just enough cold air can snuck into Chicago at the tail end for wet areas to freeze later by Tuesday evening and for a few snowflakes to fall before the precipitation came to an end.

The second of the twin storms will track farther to the south and east than the first storm as cold air will be pulled southward at midweek, AccuWeather meteorologists say.

"Since the second storm will be a much colder system, impacts from snow and ice will occur much farther to the south in the Central and Northeastern states," Rayno said.

Ahead of this second storm, numerous winter storm watches were issued in the Northeast early on Wednesday morning. 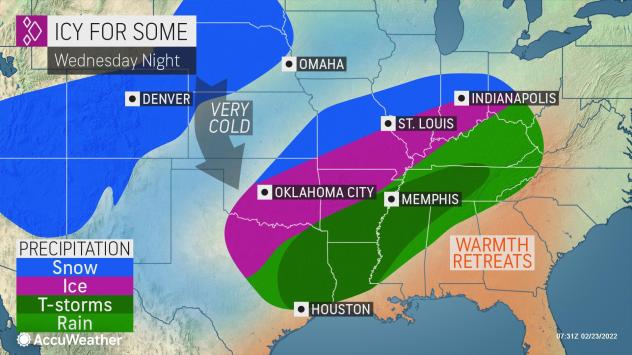 In locations from the middle Mississippi Valley to the Ohio Valley and mid-Atlantic region, a substantial drop in temperature will occur ahead of the second storm.

For example, in Indianapolis, the high temperature was 61 F on Tuesday, but by Wednesday and Thursday, highs will be no better than the lower 30s. In New York City, after temperatures peaking in the mid-60s on Wednesday, temperatures will be slashed by 25-30 degrees on Thursday and may hover within a few degrees of the freezing mark by Thursday night. How extensive wintry precipitation and slippery conditions become in these cities, as well as others in the wintry mix zone, will depend on whether temperatures hover a little above or a little below 32 during the second storm.

Even in the Philadelphia and Pittsburgh areas, a brief period of snow or icy mix can make for slippery conditions for a time.

An extensive zone of ice or a wintry mix that includes snow, sleet and freezing rain is expected to stretch from central Texas to southern New England from Wednesday to Friday. Cities that will be impacted by the wintry precipitation include Dallas, Pittsburgh, New York City and Boston. 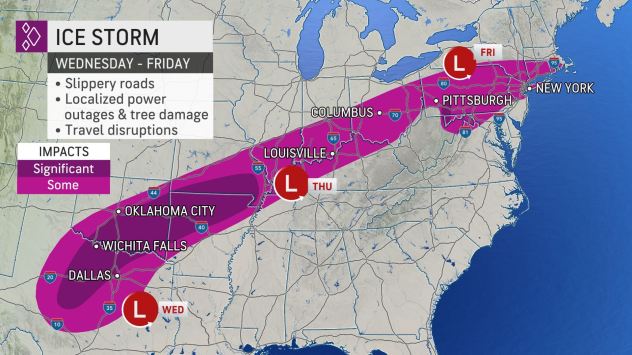 About 0.10 to 0.25 of an inch of ice can glaze exposed surfaces in this area that covers about 1,700 miles. Since some of the ice may take the form of sleet, much of the zone may have only sporadic power outages and minor tree damage. However, a heavier amount of freezing rain can cause more tree damage as well as more widespread power outages from north-central Texas to northwestern Arkansas and southern Missouri.

The second storm is likely to bring a significant amount of snow from central Oklahoma to northern and central New England. Even though sleet may cut down on accumulations in part of the zone from the southern Plains to the Midwest, about 3-6 inches of snow accumulation is anticipated from central Missouri to northern Ohio and southeastern Michigan from late Wednesday night to Friday. Snow from this second storm will sprawl along a nearly continuous zone from the mountains of Southern California to Down East Maine or about 2,700 miles. 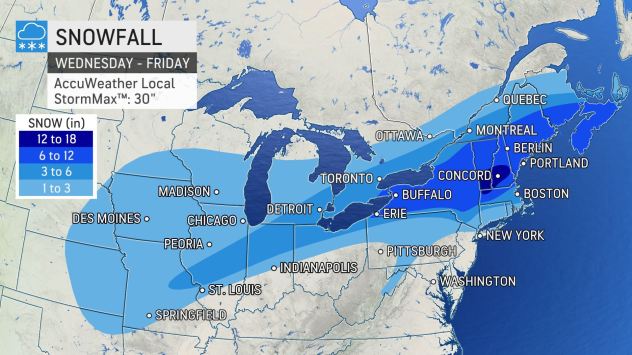 The heaviest snow from the second storm is most likely to fall from the southern tier of New York to Maine, Vermont, New Hampshire and northern Massachusetts with a general 6-12 inches forecast from Thursday to Friday. A pocket of 12-18 inches of snow with an AccuWeather Local StormMax™ of 30 inches is possible in portions of central and southern Vermont and New Hampshire to northwestern Massachusetts.

The second storm's wintry precipitation is likely to lead to direct delays at the major airline hubs of Denver, St. Louis, Chicago, Detroit, Pittsburgh, New York City and Boston, and hundreds of regional airports will be affected by the storm. As crews and aircraft are displaced, scores of flight delays and cancellations are likely by the latter part of the week with lingering effects into the weekend in the wake of the massive storm.

Another major aspect of both storms is heavy rain that can aggravate or lead to small stream and river flooding, especially from parts of northern Louisiana to portions of Pennsylvania. A general 2-4 inches of rain is likely to fall in this zone with local amounts of 6-10 inches from both storms combined.

Ready for spring yet? Then, read AccuWeather’s 2022 spring forecast