This dog and its owner went for a nice lunchtime walker over ice in Anchorage, Alaska, on Nov. 3.

Following an October that was milder than normal in Alaska, it turned brutally cold in parts of The Last Frontier this week.

Subzero cold is not uncommon for interior Alaska in early November, but the dramatic plunge that occurred earlier this week was notably harsh. 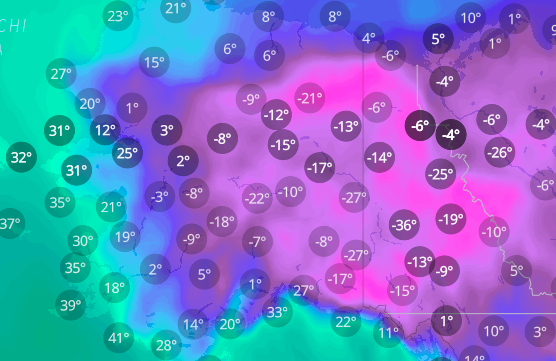 Early on Monday, temperatures dropped to minus 23 F in Fairbanks for the first time this season, which is the earliest the city has recorded a temperature that low since Oct. 25, 1996. The coldest Nov. 2 on record in Fairbanks is 33 below zero, and that temperature reading was recorded back in 1907.

An average high temperature for early November in the city is 16 degrees Fahrenheit while a typical low is around zero.

Several hundred miles to the east of Fairbanks, the remote town of Chicken, Alaska, (population of 13, according to the United States Census Bureau) reached 40 below zero early Monday, making it the earliest minus 40 or below reading in Alaska since 2008, according to the National Weather Service (NWS). Farther north in Circle, Alaska, which has a slightly larger population of 74, the mercury dipped to minus 30. Circle is about 155 miles northeast of Fairbanks.

On Wednesday, the low in Fairbanks bottomed out at minus 29 F, just one degree short of the daily record of 30 below zero. Temperatures failed to even come close to zero on Wednesday as the high peaked at minus 14.

"I would say those temperatures [in Fairbanks and Chicken] are pretty unusual for late October and early November," said AccuWeather Senior Meteorologist Brett Anderson, who regularly issues forecasts for Alaska, and noted the cold blast was "impressive."

The cold was not in a hurry to depart either. In fact, the high on Thursday in Fairbanks was 11 F after plummeting to 21 below zero earlier in the day. It's the first day the high temperature has been forecast to reach above zero since Sunday. In Chicken, the high temperature on Thursday was minus 18 while the low was a staggering 41 below zero. The AccuWeather forecast for Friday is calling for a high of 2 in the small town. If that occurs, it would the first time a high above zero has been recorded there since Oct. 31.

Amid the brutal cold came a colorful sight. The NWS shared a stunning image of light pillars that formed on Tuesday night in Fairbanks. The phenomenon occurs when light is refracted by ice crystals. However, for ice crystals to form the weather needs to not only be cold, but calm as well. Light pillars typically take on the color of the light source itself.

Here are some nice light pillars on this cold night in Fairbanks, sent in from one of our Meteorologists. #akwx pic.twitter.com/DMLvE9TGNT

"They appear as beams of light to the observer. It is usually caused by street lights. However, any source of light can create a light pillar given proper conditions," Samuhel said.

The extreme cold arrived after the western two-thirds of Alaska was milder than normal for October, according to Anderson. The highest temperature departures occurred in the northwestern part of the state, including around Nome. The eastern and southeastern quarter of the state averaged near to slightly below normal for October including cities such as Juneau, he said.

Temperatures in October were above normal in Fairbanks as the lowest temperature in the city during the month was 1 below zero on Oct. 23.

Some relief from the Arctic cold is set to unfold in the coming days, but not before a snowstorm plows across the state. 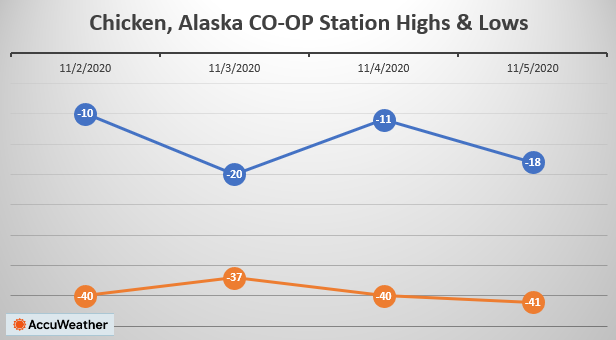 This graph shows temperatures in Chicken, Alaska, from Nov. 2 to Nov. 5. (NWS CO-OP data, preliminary for 11/5)

A large swath of Alaska is currently under a winter storm warning. Areas from Nome on the west coast all the way through Fairbanks and to the state's border with the Canadian province of Yukon are under the warning.

"A strong storm system moving east from the Bering Sea will scour out the Arctic air mass," Samuhel said. "But in the process, it will spread widespread snow across the state."

A 76 mph wind gust was reported Thursday morning at Tin City, Alaska, located on the state's northwestern coast. The height of the snowstorm brought sustained winds of 55-60 mph to the region. 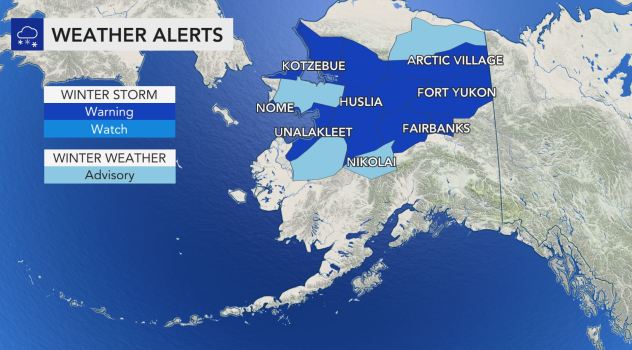 "The next 10 days do not look all that cold," Anderson added.

Both Anderson and Samuhel said there is the potential for another round of abnormal cold during mid- to late November, especially for central and eastern Alaska. The extended AccuWeather forecast shows low temperatures in Chicken around minus 20 or lower during the third week of November.