Storm to produce widespread snow, blizzard conditions in central US

Blizzard conditions may unfold in parts of the Dakotas over the weekend, while other areas receive rain or a wintry mix.

A troublesome combination of heavy rain, ice, snow and strong winds will hamper travelers making their way home from their Thanksgiving destinations this weekend as a large storm slowly navigates its way across the central United States.

As if a storm at the start of the busy Thanksgiving travel period was not enough, the second major storm this week will add to travel stress on the roads and at the airports.

A swath of heavy snow is forecast to extend from the Rockies in New Mexico and Colorado to the Plains of the Dakotas to areas surrounding Lake Superior in Minnesota, Wisconsin and Michigan. 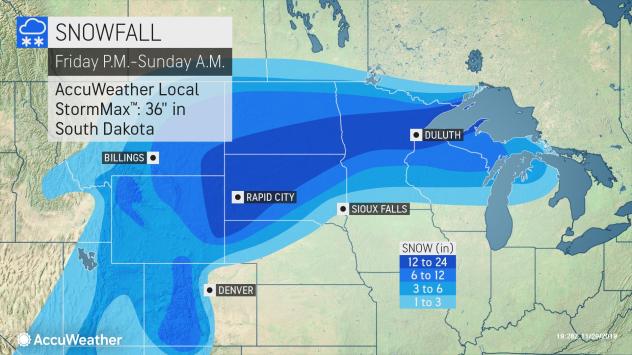 An AccuWeather Local StormMax™ of 36 inches is forecast for the Black Hills of South Dakota.

The snow will fall simultaneously over a nearly 2,000-mile-long swath from the Rockies to the Upper Midwest during Friday night and Saturday.

Wintry conditions are in store along a 1,000-mile-long stretch of heavy snow along Interstates 90 and 94 alone. Blizzard conditions can occur in part of this swath. The visibility could be so low at times it may be difficult to determine where the road surface actually is. 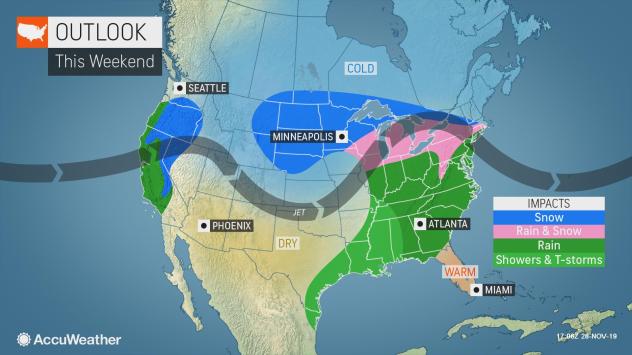 Travel should be avoided in these areas until the storm leaves and crews have had a chance to clear roads of deep snow by Sunday or Monday. However, drifting snow in part of this swath can be a problem through Sunday, due to high winds.

Farther south, a pocket of ice will create dangerous conditions for a time.

Storm to finish its cross-country journey, bring dangerous travel impacts to Northeast this weekend How weather impacts the 12 days of Christmas shopping Storm during early December to set up ‘firehose effect’ with rain, mountain snow in California

Icy roads and sidewalks will be a concern from the central and southern Plains on Thanksgiving Day.

During Friday night, ice or a wintry mix of snow, ice and rain is in store from the High Plains of northwestern Nebraska to southeastern South Dakota, northern and central Iowa, southern Minnesota and southwestern Wisconsin.

During Saturday, the zone of ice or a slippery wintry mix is forecast to extend from the quad state area of Iowa, Nebraska, South Dakota and Minnesota to central and northern Wisconsin and much of Michigan. 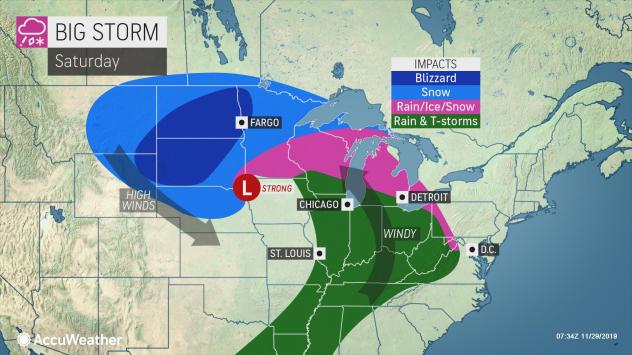 Winds can be strong enough to cause property damage and power outages even in areas of the Plains where all or mostly rain falls.

Meanwhile, drenching rain broke out over Oklahoma and southeastern Kansas during Wednesday night. This soaking rain will expand northward and eastward over the central Plains and the middle Mississippi and Ohio valleys during Thursday night and Friday.

Some of the rain in this swath can be heavy enough to cause urban flooding. At the very least, the combination of slick roads and blowing spray from vehicles will create poor visibility and hazardous conditions where the volume of holiday and shopping traffic increases.

Where warm air surges in over the southern Plains to near the northwestern and central Gulf coast area, the risk of severe thunderstorms will increase into Saturday.

By Saturday night, the back edge of the heavy rain and leading edge of the dry air will have crossed the middle and lower portion of the Mississippi River. 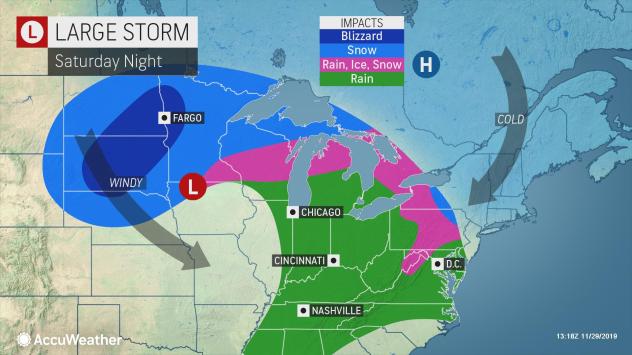 By Sunday, the heaviest snow is likely to be diminishing over the Upper Midwest. However, a setup of rain changing to snow can occur over the lower Great Lakes region. 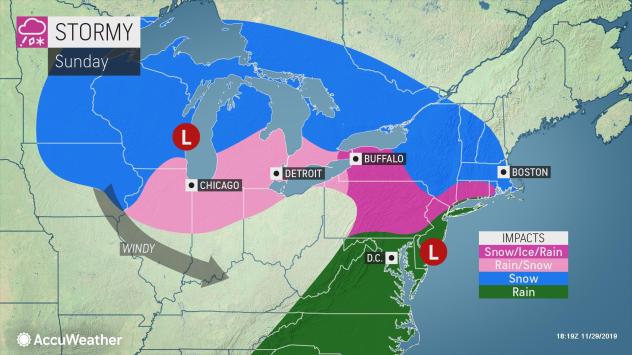 Depending on the intensity of this snow at the local level, road conditions from Illinois to Ohio and the Lower Peninsula of Michigan along the I-80, I-90 and I-94 corridors and perhaps as far south as I-70 and I-64, can range from wet to slushy to snow-covered on Sunday and Sunday night. Gusty winds will add to the winterlike setup. 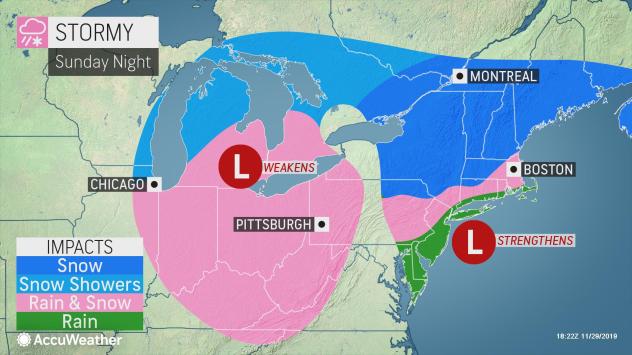 For those traveling home to the Northeast following the Thanksgiving holiday, the storm will also bring wide variety of precipitation ranging from rain to ice and snow spanning later Saturday to Monday.