Polar air to send temperatures plummeting across eastern US

As cold air pours over the region, parts of the Northeast will receive their first flakes of the season while temperatures could reach the 30s in parts of the South.

The start of the week may have been mild in many parts of the country, but big changes are on their way.

November has begun on a chillier note following a record or near-record warm October in much of the South and East. The last few days have offered a brief respite from the recent chill in the East, but AccuWeather forecasters are advising residents not to get used to the milder weather.

A cold front associated with a strong storm system tracked northeastward out of the Plains before heading into south-central Canada, reaching the Eastern Seaboard Friday.

The air ahead of the front will be warm enough for precipitation to fall in the form of rain throughout the East. Any snow will be reserved for the Dakotas and northern portions of Minnesota and Michigan. However, that may not be the case by the weekend.

As a ripple in the jet stream moves from the eastern Great Lakes into the Northeast on Saturday, spotty showers are likely in much of the region. Outside of the very highest elevations where a few snowflakes may fall, most of the precipitation should still be in the form of rain. 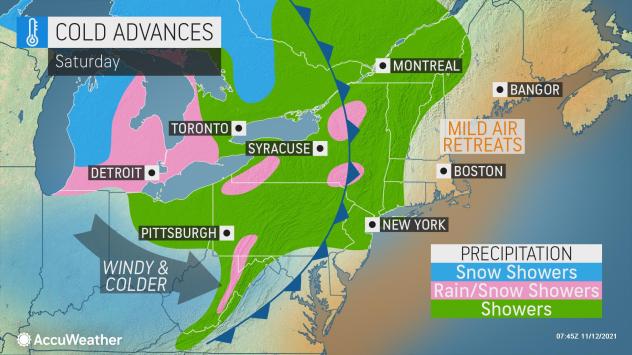 Temperatures throughout the East will be below normal by Sunday. Highs in the 50s F may occur as far south as southern Georgia. Even in Orlando, Florida, a forecast high of 72 degrees will be about five degrees lower than average.

"The core of the coldest air will remain to the west, but it will turn chilly by Sunday," stated AccuWeather Meteorologist Carl Babinski.

While the Southeast will be dry, precipitation will continue in the interior Northeast. Western portions of New England, New York and Pennsylvania will have snow showers or a mix of rain and snow showers on Sunday. 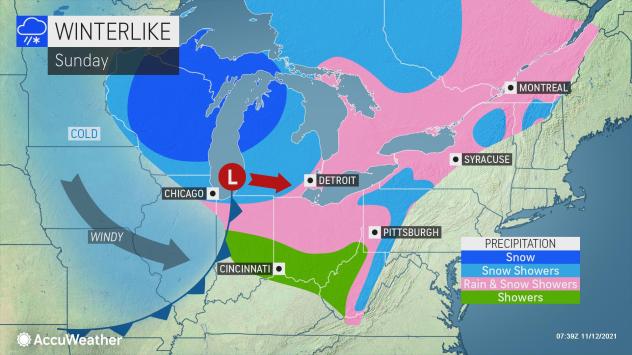 By later Sunday and Sunday night, another ripple in the jet stream will move toward the region. With this system being farther south than the first, colder air from the north will be able to pour into the region.

"The roots of this cold shot will begin near the Arctic in northern Canada, with the polar air being dragged southward by repeated storms riding from the Canadian Prairies into the eastern U.S.," said AccuWeather Meteorologist Jake Sojda. 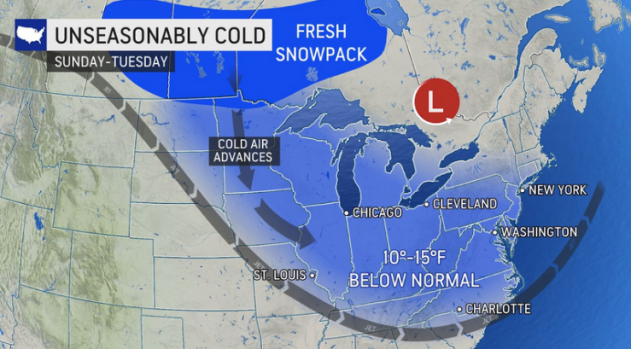 Many locations in the interior Northeast will receive their first snowflakes of the season as a result. Most areas will have only a coating on grassy surfaces, but there will be exceptions.

"Any appreciable measurable snowfall in the East is expected to be confined to areas downwind of lakes Erie and Ontario," said Babinski.

Even though the growing season has already ended with numerous frosts and freezes in the interior Northeast, residents in cities much farther to the south may need to take steps to protect tender vegetation at the end of the week and this weekend. Widespread low temperatures in the 30s are expected as far south as the northern Florida Panhandle by Saturday night. Much of northern Mississippi, Alabama and Georgia will have the potential to fall below freezing. Temperatures will slowly moderate in the Southeast on Sunday night and Monday night, but the coldest spots could still dip to near freezing.

Temperatures will trend higher in the Northeast as well, but that will likely not occur until the middle of next week. Even though the chill will relax, temperatures are not expected to soar to levels well above normal again.