High temperatures will reach 60s in early week before cold air slices in.

It might have felt like spring to start this week in the Northeast, but several storms will swing through the region this week, trimming temperatures and serving as a reality check with wintry weather in store for some areas.

"As many as three storms will travel from the South Central states to the Northeast into Friday," AccuWeather Chief On-Air Meteorologist Bernie Rayno said.

Following record-challenging temperatures reaching the 40s, 50s, 60s and 70s on Monday, the first storm brought a swath of mainly light rain to the region during Tuesday night. This storm will bring the first push of cooler air to the mid-Atlantic and somewhat colder air to central Appalachians and New England.

"Colder air will advance southeastward enough from midweek on for some snow and ice to occur in parts of the central Appalachians and northern New England with the second and third storms," Rayno said. 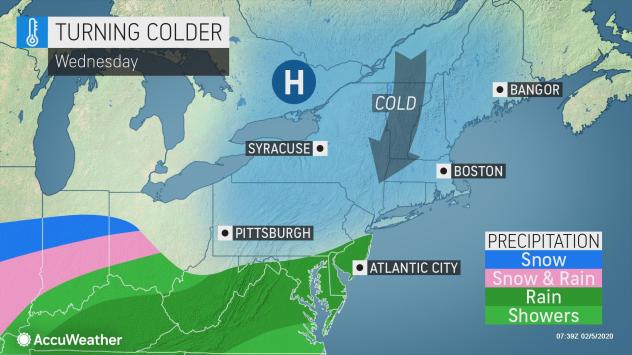 Enough cold air will be in place for ice or a wintry mix at the onset of the second storm from the central Appalachians to portions of central and southern New England and some snow farther north from Wednesday night to Thursday. 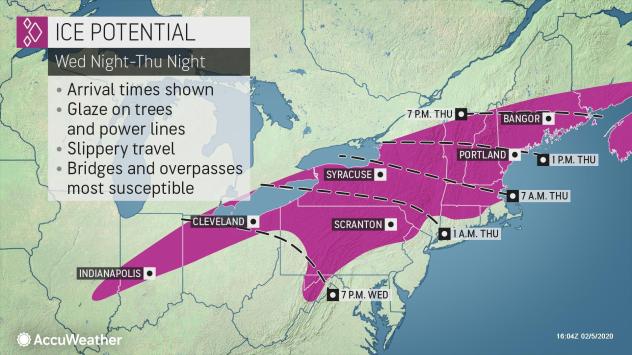 Motorists who are planning to travel along interstates 76, 78, 79, 80, 81, 86, 87, 88, 90, 91, 93 and 95 should be prepared for icy and slippery conditions. Bridges, overpasses and areas that do not receive direct sunlight during the daytime hours will be most susceptible for black ice. 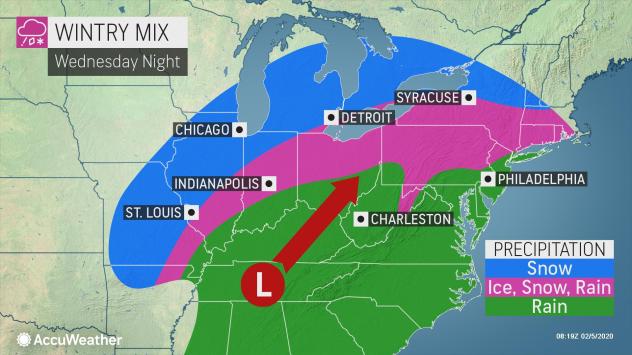 The track of the second storm is currently forecast to be far enough inland to allow milder air to return, which could play a role in the primary form of precipitation expected with the third storm that will follow closely behind. 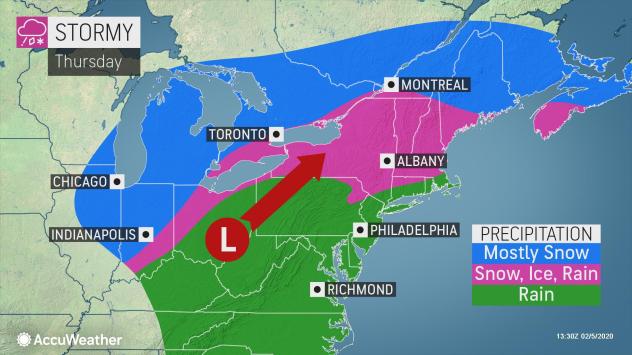 If colder air becomes more firmly rooted in the Northeast, then the second storm could end up moving closer to the coast. In this scenario, it could set the stage for more snow and ice to fall from the third storm set to arrive. However, AccuWeather meteorologists think the inland track is more likely at this time. 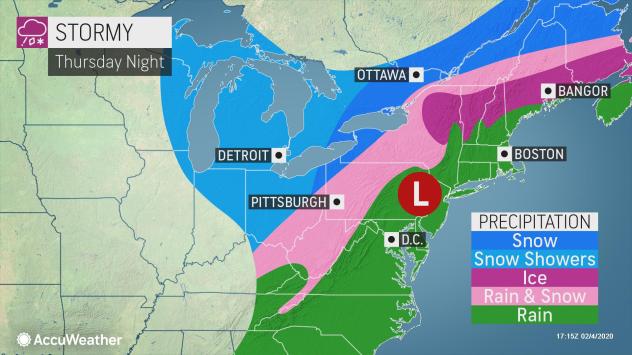 The third storm should follow close behind and take a similar inland route with all rain predicted in the swath from Richmond, Virginia, and Washington, D.C., to New York City and Boston. The majority of the precipitation is also expected to fall as rain in the central Appalachians to central New England. 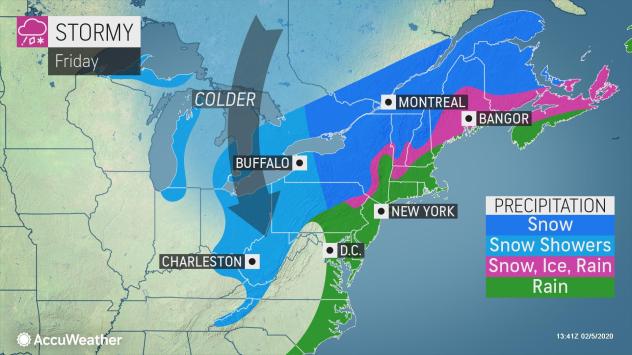 Enough rain can fall to lead to incidents of urban flooding, mainly along the I-95 corridor of the mid-Atlantic and southern New England. 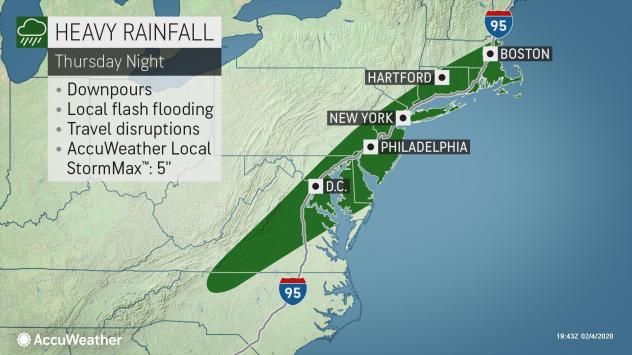 A general 2-3 inches of rain is forecast with an AccuWeather Local StormMax™ of 5 inches can occur this week. The bulk of the rain is likely to fall during the third storm from Thursday night to Friday.

As has been the case much of this season so far, portions of the interior, and especially the northern tier, will experience more wintry weather. 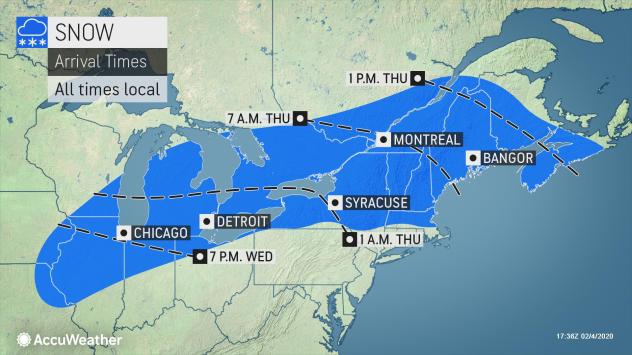 "The combination of the second and third storms may muster enough snow to bring a few inches to parts of western Pennsylvania, western and central New York state and central New England," AccuWeather Senior Storm Warning Meteorologist Brian Wimer said. "Heavy snow, perhaps on the order of 6-10 inches with locally higher amounts can occur from northern New York state and perhaps upward of a foot of snow for parts of northern New England." 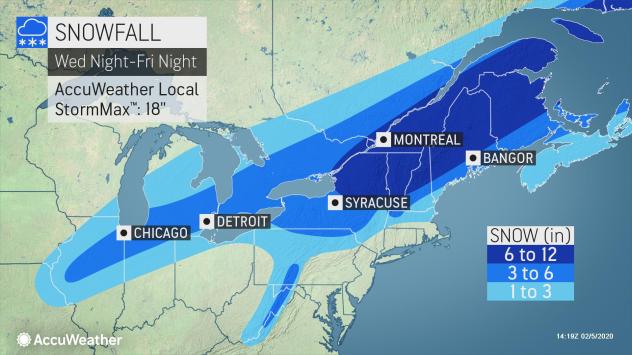 An AccuWeather Local StormMax™ of 18 inches is forecast for parts of northern New England.

A return flow of colder air following the third storm may allow snow showers or a period of steady, accumulating snow in portions of Ohio and western, central and northern Pennsylvania on Friday to central New England during Friday night. Enough snow can fall in these areas to make for slippery conditions.

Watch for a sneaky 4th storm

Yet another storm, the fourth storm in seven days, may sneak across parts of the Northeast with a batch of snow and rain for the second half of the weekend.

Since the storm from Friday is likely to bring a somewhat stronger push of cold air in its wake, the storm this weekend may have the best chance in the bunch to bring snow or a wintry mix to part of the I-95 corridor from Washington, D.C., to Philadelphia and perhaps New York City.

So despite Punxsutawney Phil's prediction that spring is just around the corner, it is too early to write winter and big snowstorms off just yet, even in coastal areas of the Northeast.

"Even though cold weather is unlikely to lock in over the Northeast for the rest of the winter, from a climatology standpoint, some of the bigger snowstorms of the winter have occurred during February and March in the Northeast, including the coast," AccuWeather Lead Long-Range Meteorologist Paul Pastelok said.

Atlantic Ocean water temperatures reach their lowest point of the year during early March and the upper levels of the atmosphere remain cold into April. This means that during average conditions in February and March it is sometimes easier for snow to fall and accumulate when compared to December and January.

One big winter storm or two moderate snowstorms could be enough to wipe out much of the snowfall deficit that has developed across much of the Northeast.

By early February, New York City typically has received about 13 inches of snow. Thus far there has only been about 5 inches. Only a few tenths of an inch of snow has fallen on Philadelphia. Even Boston so far has only received about half of its average snowfall for this point of the winter.

How the US women’s soccer team trained to beat the heat in T... Dangerous storms to rumble from St. Louis to Philly, DC