A robust cross-country storm system was beginning to take shape Wednesday morning as accumulating snowfall stretched from Colorado and New Mexico to Michigan. AccuWeather meteorologists say the storm will last into Friday, covering more than 2,000 miles and at least 19 states with snow and ice.

The travel-snarling snow and ice has prompted winter storm warnings from the southern Rockies to portions of New England. 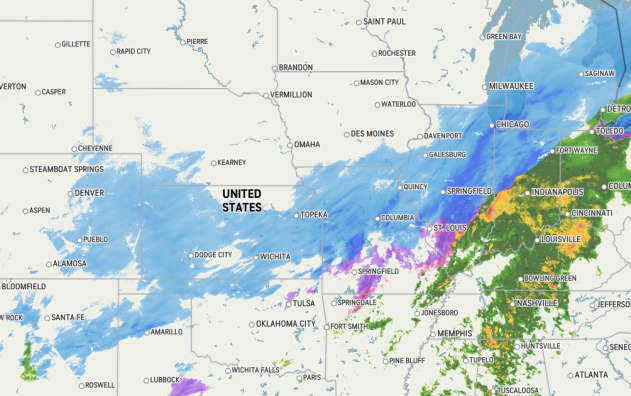 The radar Wednesday morning, Feb. 2, 2022, showed snow stretching from Colorado and New Mexico to Michigan as a major winter storm was getting underway. (AccuWeather)

AccuWeather Chief Meteorologist Jonathan Porter warned that not only will the storm impact around 90 million people in its path but also retailers and consumers, as weather conditions may slow down or even stop a few trucks from transporting goods through parts of the central United States for a few days this week.

"We could be looking at a big mess in moving products to where people and businesses need them as a result of our latest winter storm, and this interruption in the supply chain may be felt for weeks," Porter said.

Travel could become an absolute mess as significant snow and ice strike the center of the nation.

“Motorists with trips that take them through the zone of ice and snow in the middle of the nation should be prepared for substantial delays, dangerous travel and road closures,” AccuWeather Senior Meteorologist Alex Sosnowski said. He added that travel will become treacherous across many cross-country highways, including west-to-east interstates 20, 40, 70, 80 and 90, as well as north-to-south interstates 35, 55, 65 and 71. 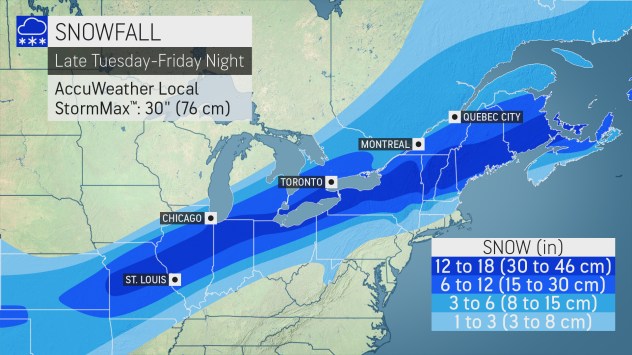 Snowfall that began late Tuesday across the central U.S. will continue in rounds into Thursday night. The heaviest snow is expected to accumulate from central Missouri to north-central Illinois, northern Indiana, southeastern Michigan, far northwestern Ohio and the far northern tier of the Northeast.

Columbia, Missouri, and Peoria, Illinois, are likely to receive a foot of snow. Farther to the east, Fort Wayne, Indiana and Toledo, Ohio, could both receive a foot of snow. Across neighboring areas of Canada, metro areas like Toronto are in line to pick up 8-12 inches (20-30 cm) of snow. According to AccuWeather forecasters, several cities will have a shot at breaking various citywide records.

A slight southward shift in the heavy snow from the second part of the storm is likely to prevent Detroit from picking up over a foot of snow from this storm with snowfall likely to range from a few inches north and west of the city to near a foot in the southeastern corner of the Lower Peninsula of Michigan.

The last time a snowstorm unloaded upwards of a foot of snow in Detroit was back in 2015 when a storm from Feb. 1-2 dropped 16.7 inches of snow. That amount made it rank as the third heaviest snowstorm on record in Detroit. The top snowstorm still stands as the April 6, 1886, storm that unleashed 24.5 inches on the city.

Even though Detroit is unlikely to sneak a top-five highest snowfall with this storm, Fort Wayne, Indiana, may etch a spot in its top-five snowstorm list. The city's airport would need to pick up more than 13.6 inches to surpass the fifth-heaviest snowstorm on record. The last time that Fort Wayne, located about two hours northeast of Indianapolis, was buried by more than a foot of snow was 49 years ago in December of 1973. Fort Wayne is currently forecast to receive 10-15 inches of snow. 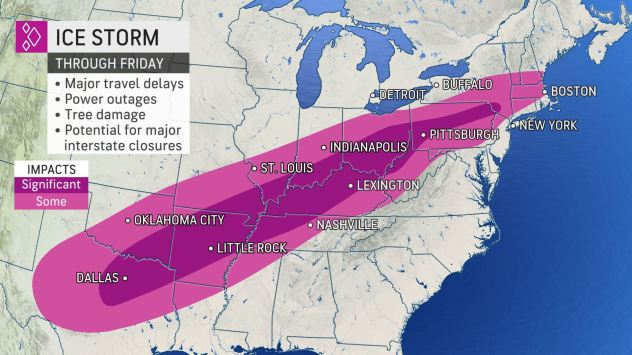 Indianapolis will likely not receive enough snow to break into its ranking for top-five snowstorms on record, but it will still receive a considerable snowfall. AccuWeather meteorologists predict the city will pick up 4-8 inches of snow as well as 0.05 to 0.15 of an inch of ice through Thursday. Indianapolis would need to receive more than 12.7 inches of snow in order for this storm to qualify as a top-five snow event.

Forecasters are warning that areas south and east of the corridor slated to receive the heaviest snow will face a wide array of impacts such as major travel delays, power outages, tree damage, along with the potential for major interstate closures due to icing.

With ice accretions upwards of 0.25 of an inch possible, the threat of downed power lines will increase substantially. A zone of ice accumulations reaching even greater than 0.25 to 0.50 of an inch of ice will be possible across some locations. Thousands could be without power for a period of time by late week, according to AccuWeather meteorologists. 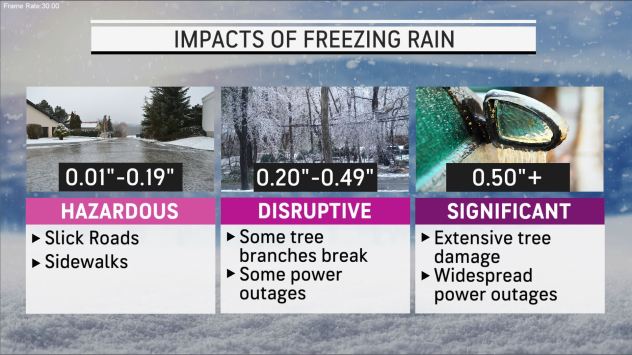 "Parts of the Ozarks, Ohio and mid-Mississippi River valleys could see over an inch of ice accumulation, which would cause widespread power outages and make travel nearly impossible for a time," AccuWeather Senior Meteorologist Dan Pydynowski explained. "Unfortunately, the significant ice storm could impact areas of western Kentucky, which were devastated by a long-track EF4 tornado less than two months ago on Dec. 10."

Across parts of the area predicted to pick up dangerous icing, precipitation is likely to change over to snow. That snow can cling to trees and power lines that are already weighed down by the ice. Any breeze that develops in the wake of the storm may potentially lead to further tree and power line damage. 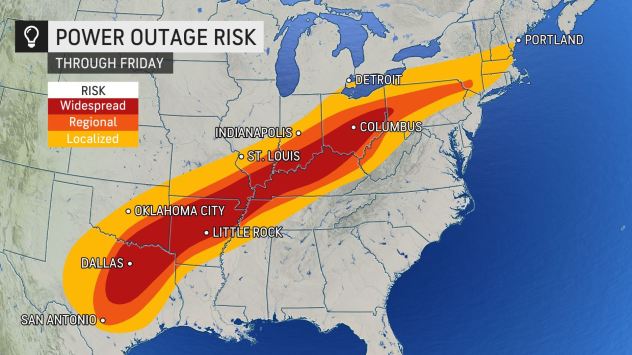 Another danger besides the winter precipitation looms for a large part of the Plains and Midwest: dangerous cold that will threaten hypothermia and frostbite for those who are not dressed properly or do not have proper shelter.

As temperatures plummet with the passage of an Arctic cold front, winds will also increase and usher in even lower AccuWeather RealFeel® Temperatures that could drop to zero and below as far south as West Texas.

"This Arctic air mass will produce some of the coldest air of the season for places like North Dakota and northern Minnesota by Thursday morning," AccuWeather Meteorologist Matt Benz said.

By Thursday, 24-hour temperature changes of 20 to 30 degrees Fahrenheit will be within the realm of possibility from the Upper Midwest to the central Plains and across the Great Lakes and south-central United States. 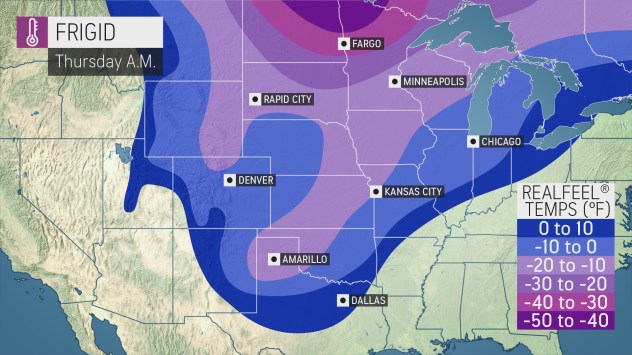 "Some areas could experience 24-hour temperature swings as much as 50 degrees. This can lead to a rapid increase in heating demand for a lot of the central U.S," said Benz.

The plunging temperatures will cause areas of slush, soft ice and standing water to freeze solid and make the removal of the wintry precipitation very difficult.

Milder air will linger over areas farther south across the Gulf Coast states, where rain and thunderstorms will soak the region and raise the risk of flash flooding.