Florida faces grim reality: Ian is deadliest hurricane in state since 1935. Get the latest.

Sept. 12 (UPI) -- Ice that forms on the world's more than 117 million lakes is melting earlier in the year, affecting plant and animal life in those ecosystems, according to new research published in Nature Communications.

Between 1979 and 2020, the average timing of lake ice break-up across the Northern Hemisphere has advanced by eight days, the research, conducted by Dr. Iestyn Woolway of Bangor University, found.

The earlier melt has led to excess lake warming with numerous implications for lake ecosystems.

"Our analysis suggests a widespread excess lake surface warming during the months of ice-off which is, on average, 1.4 times that calculated during the open-water season," researchers found.

"This excess warming is inﬂuenced predominantly by an 8-day advancement in the average timing of ice break-up. ... Excess lake warming will likely alter within-lake physical and biogeochemical processes with numerous implications for lake ecosystems." 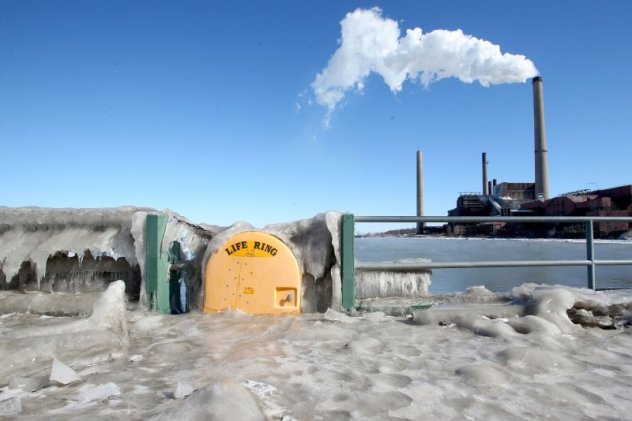 A life preserver sits frozen in ice at the Miller Road Park pier in Avon Lake, Ohio on January 31, 2018. Ice that forms on the world’s more than 117 million lakes is melting earlier in the year, affecting plant and animal life in those ecosystems, according to new research published in Nature Communications. File Photo by Aaron Josefczyk/UPI

"Lake ice is vulnerable to climate change. Within a warming world, many lakes have experienced a substantial change in ice phenology, with a later onset and an earlier break-up of ice cover and, subsequently, a longer duration of the ice-free seasons. A change in ice phenology can inﬂuence the seasonal and inter-annual variability of lake surface water temperature, with knock-on effects on other physical as well as biogeochemical processes in lakes," the study's authors found.

Researchers found that in the lakes they studied, warming was driven primarily by "additional radiation input due to the advancement of ice break-up under climate change."

The study's authors believe that lakes will eventually be free from ice between 15 and 45 days earlier in the Northern Hemisphere, leading to an increase of between 2 and 6 degrees in additional surface temperature.