The calendar says June, but it looked more like January in Yellowstone National Park as snow fell over northwestern Wyoming on June 17.

Is it the middle of June or the middle of January? That’s the question some residents in parts of Idaho and Montana may have been asking this week as their communities were transformed into a winter wonderland.

With the summer solstice just days away, Old Man Winter ruffled some feathers across the northern Rockies by delivering a large helping of snow, with totals surpassing a foot across the highest elevations from Tuesday into Wednesday.

The Blaine County Sheriff’s Office in Idaho said on Facebook that it was issuing a “felony warrant for Mother Nature for Illegal Dumping.” A storm total of about 10 inches of snow was measured north of Galena Summit while south of the summit, a total of 6 inches was measured. The sheriff’s office also responded to several stuck vehicles in the area.

“If you see [Mother Nature], please show her a calendar. She thinks it's Junuary…” the sheriff’s department wrote.

Winter storm warnings were issued for elevations above 5,500 feet in southwestern Montana, and forecasters warned that travel may be difficult on mountain roads. The warnings also extended into parts of north central Idaho. Department of transportation webcams from Idaho and Montana showed snow-covered roads throughout the day on Wednesday.

The National Weather Service (NWS) in Missoula, Montana, noted that it appeared snow amounts at several of their SNOTEL stations reported up to 19 inches of snow, which is more in one day than had been recorded in the last 30-40 years for those specific locations. The NWS called it a “historic heavy precipitation event” for Lemhi County, Idaho.

SNOTEL stations are automated data collection sites and are designed to operate unattended and without maintenance, in some cases for over a year or more. The U.S. Department of Agriculture says a typical SNOTEL site uses “measuring devices and sensors, an equipment shelter for the radio telemetry equipment, and an antenna that also supports the solar panels used to keep batteries charged." These devices can track and provide data on weather conditions such as precipitation, snowpack and temperature.

The NWS cautioned that the records at the SNOTEL sites were unofficial. Historically, snowfall records have only been tracked by human-run stations because measurements need to be taken manually, AccuWeather Senior Weather Editor Jesse Ferrell explained. 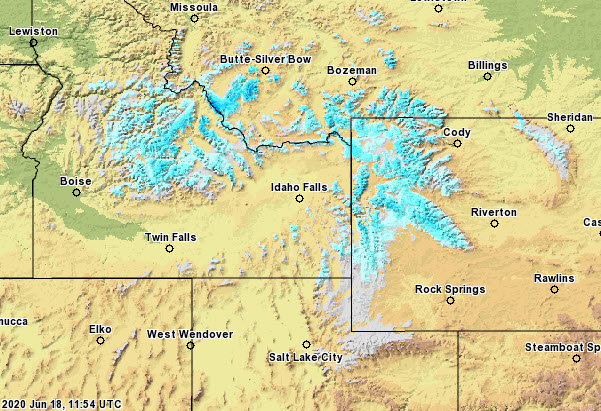 The late-spring snowfall was the product of a chilly area of low pressure that traversed the Northwest, according to AccuWeather Senior Meteorologist Bill Deger.

AccuWeather forecasters break down what to expect this summer across the US
Father's Day forecast: Comfortable conditions for many, spotty storms for some
Scientists baffled after 50,000-year-old lake mysteriously changes color
Summer solstice brings opportunity to see unusual 'electric blue clouds'

“While not terribly unusual, since snow can still fall during the early and late summer in the northern Rockies, there were some impressive snowfall totals, including a report of 17 inches near Darkhorse Lake just west of the Continental Divide in Montana,” Deger said, adding that snow levels hovered around 5,500 feet.

"The heaviest totals look like they were above 7,000 feet," he said.

It may be 3 days from the ☀️ summer solstice, but it's ❄ snowing in Idaho's high country. Here's the view from Bogus Basin and Redfish Lake this morning. #IDwx pic.twitter.com/5fKgiWs5DG

Snow was also reported in Wyoming. A webcam from Yellowstone National Park showed light snow falling amid the park’s steamy geysers. One Twitter user in Kemmerer, Wyoming, captured video of snowflakes falling early Wednesday and told AccuWeather that his town received about 2 inches from the storm.