Daily record highs will continue to fall in cities throughout the South and Southeast as the warmest December on record comes to an unusually warm close for many.

The final month of 2021 has been summerlike throughout much of south-central and southeastern United States, but AccuWeather meteorologists are warning residents to locate their winter coats. While many areas are on the verge of shattering their all-time December average temperature record, an influx of sharp, cold air could make conditions more like the dead of winter for some areas in the opening days of 2022.

Following the warmest Christmas on record for many areas, the October-like temperatures will remain locked in place through the end of the month. Daily temperature departures will rise 15-30 degrees Fahrenheit above average in much of the region, according to AccuWeather Lead Long-Range Meteorologist Paul Pastelok, while some records that have stood for over 120 years could be challenged.

On Wednesday, Memphis, Tennessee fell just one degree shy of the daily high-temperature record of 72 degrees set in 1889. In both Atlanta and Charlotte, North Carolina, daily records from the 1980s and 1990s will face fierce competition this week as well. 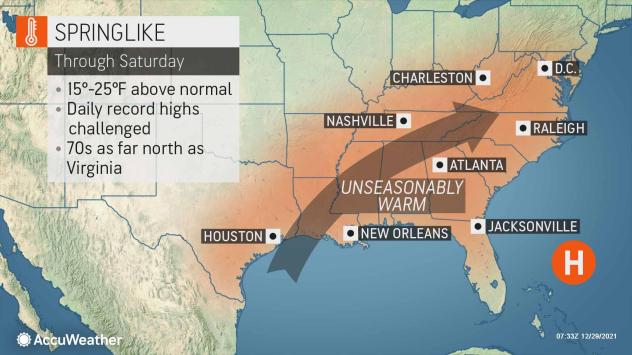 Forecast highs for the final days of 2021 will also close the record-warm month in Texas on a hot note. With highs forecast to be near or above record levels through the last day of the year in San Antonio, Austin, Houston and Brownsville, Texas, to name a few, afternoon temperatures will spend multiple hours well into the 70s and lower 80s.

Persistent warmth of this magnitude has this month on pace to set a high mark amongst all Decembers that have been tracked over many decades. In addition to the Texas cities of Austin, Houston and Brownsville, there are many others in the state and over the central U.S. in general where the all-time warmest December may be recorded this year, especially at locations where official airport data only extends as far back as the mid-1900s.

Amarillo International Airport, Texas, is currently poised to beat its December record so far close to 5 degrees with an average of 48.2 degrees as of Wednesday. Even the city record of 47.3 degrees from 1933 is likely to be topped, forecasters say. 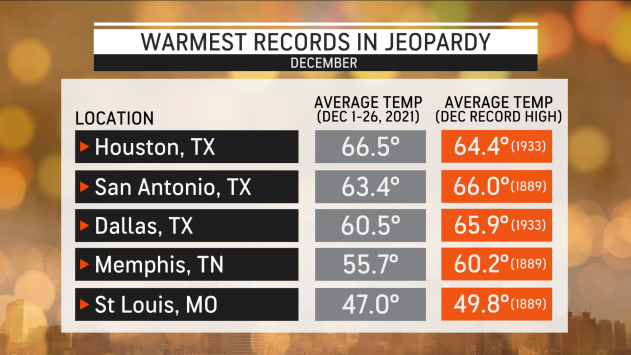 Records on this graphic prior to the mid-1900s reflect information from city locations that extend beyond local international airport data. Monthly records at the airport locations in these and many other areas in the south-central U.S. are likely to be broken this December.

There are far more locations in the Central states that are likely to set the warmest December on record or at least finish in a top five. There are some strong candidates as far north as Omaha Eppley Airfield, Nebraska, and St. Louis International Airport. Chicago may finish this month within a degree or so of the December record of 39 degrees set in 2015 at O'Hare International Airport. The all-time December record for Chicago is 43.4 degrees set in 1877.

As of the start of Dec. 28, Chicago had not yet received its first snowfall of 0.1 of an inch or more this season. The snowless record ended at midday on Tuesday, with 1.5 inches of snow officially falling at O'Hare. Typically, the first snowfall in the Windy City occurs on Nov. 18.

After all this warmth, some in the region may find themselves asking 'So when does the winter actually start?' Well, signs may suggest very soon.

The northward bulging jet stream, which has been responsible for the warmth in the region, will plunge southward for a time at the start of January. With it will come the mass of cold air that has left parts of North America frozen this week. In the northern Plains, for example, Pastelok said temperatures struggled to get above zero early this week and were 20-30 degrees below average. 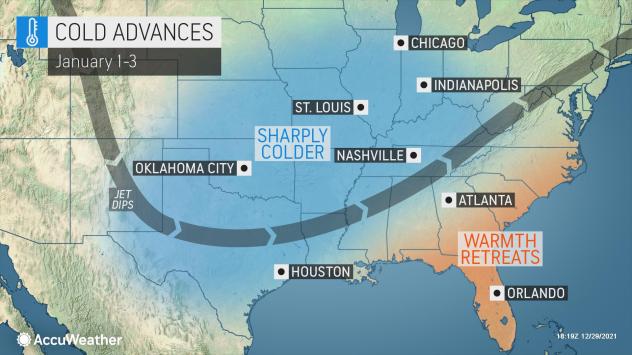 In the Southeast, it may not be enough to correct the temperature abnormalities throughout the Southern states, but the difference will be noticeable in some locations.

"While we expect some waves of sharply colder or at least cooler air to dip into portions of the southern Plains and the middle Mississippi and Tennessee valleys during the first half of January, temperatures are still likely to remain considerably above average in the Southeast," Pastelok said.

Even though only a diluted amount of cold air may reach parts of the Gulf and southern Atlantic coasts, it can bring a significant change to some locations that have been experiencing an incredibly warm December.

Temperatures are forecast to crash over portions of the southern Plains in a matter of hours from New Year's Eve to New Year's Day. Untreated wet areas will freeze solid. In Oklahoma City, temperatures are forecast to dive into the lower 20s by Saturday morning then plummet to near 10 Saturday night. Following highs in the 60s to near 70 and just hours after setting all-time December warmth, temperatures may settle to 15-30 degrees below the average high in the upper 40s. 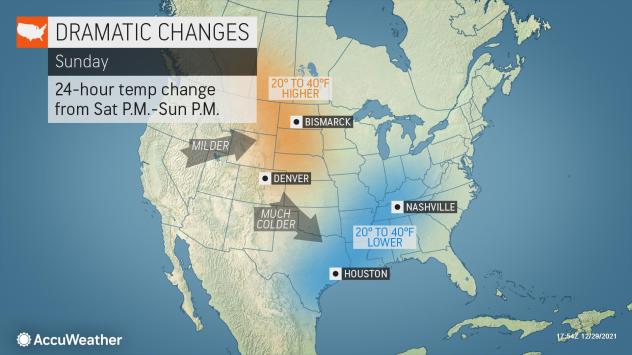 Full winter attire will be needed over much of the central and southern Plains by New Year’s Day as AccuWeather RealFeel® Temperatures plummet into the teens, single digits and even below zero F in some locations of Nebraska, Kansas and Oklahoma.

Farther east, in Memphis, and farther south in Houston, the reality check is not expected to kick in until Sunday, when temperatures will be slashed by 20-40 degrees with a major adjustment back to near average.

AccuWeather meteorologists will also be tracking a massive winter storm to go along with the major temperature adjustment from parts of the central and southern Plains to the Ohio and Tennessee valleys during the first week or two of January.

"Some temperature fluctuations between warm and cold in the zone from the southern Plains to the middle-Mississippi, Ohio and Tennessee valleys during the first half of January," Pastelok said, adding that a warmup may occur in this zone around Jan. 4 or 5, followed by another big drop in temperature into the second week of the month.

A strong northwest to southeast temperature contrast zone will set up from the central and southern Plains to the Ohio Valley and mid-Atlantic region during the first half of January.

The temperature contrast will set up an active storm track. On the storm train's colder side, snow is likely to fall, while flooding rain and severe thunderstorms can occur in the warm zone. In between, episodes of ice are possible, Pastelok explained.

People in the potential battle zone are encouraged to enjoy the warmth while it lasts as the weather is likely to turn colder at times during the first couple of weeks of January. And, even though the episodes of colder, more seasonable air may be brief, they can hook up at the wrong time when storms roll through and yield wintry precipitation in some areas of the South Central states. Nothing close to a repeat of the February 2021 record cold, snow and ice are forecast at this time.

Depending on where the storm track sets up, there is a significant chance for storms to bring accumulating snow farther south than any point this season in portions of Kansas, Missouri, Illinois and Indiana.