As much as 27 inches of snow piled up in Kansas on Tuesday as a band of intense snow forced the closure of major roads across the region.

Around 180 miles of I-70 was forced to close on Jan. 25 due to snow and ice, causing significant backups of vehicles.

A snowstorm tracking over the central Rockies and central Plains on Tuesday evolved into a traffic-halting storm for some motorists driving across one of the busiest highways across the region.

Denver was blanketed with 3 to 6 inches of snow on Tuesday, but the worst of the snow focused on a long but narrow zone stretching from east-central Colorado into south-central Kansas. 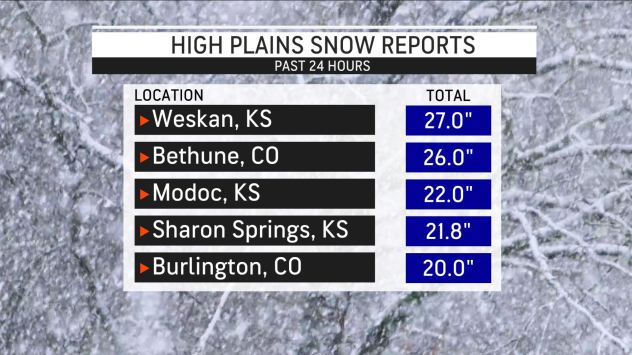 "The setup was a narrow band of very intense snow falling at rates of 3 inches per hour or more for several hours over the same locations," Senior Meteorologist Mike Doll explained. "This allowed some locations to receive over 20 inches of snow in a short period of time."

Mount Sunflower, just north of Weskan, Kansas, was one of the hardest-hit spots, with 27 inches of snow piling up throughout Tuesday. The 27 inches of snow nearly toppled a 24-hour snowfall record for the state. The existing record of 30 inches was set back in March 2009. 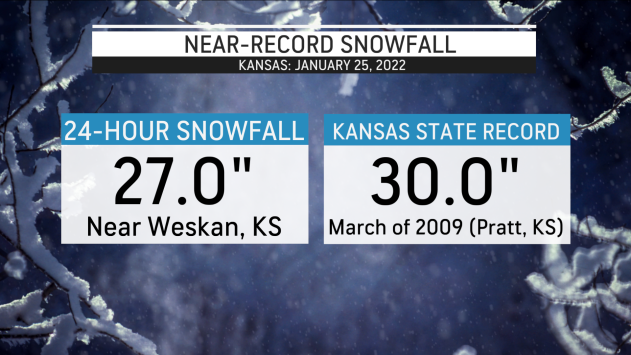 The heavy snow was too much for snowplows to keep up, forcing officials to close over 150 miles of Interstate 70 between Limon, Colorado, and Colby, Kansas. Highway 40, which runs parallel to I-70, was also shut down.

AccuWeather National Reporter Tony Laubach was in Limon on Tuesday after the highway was shut down.

"Barricades are up at this particular exit, and they are up on the exits from this point east," Laubach said.

A state trooper in Kansas said that multiple motorists became stranded on Highway 40 after ignoring the barricades and attempting to drive on the snow-clogged road.

Most stretches of I-70 and Highway 40 were passable by early Tuesday night after the snow tapered off and road crews had time to clear the snow.

Tuesday's impressive snowfall amounts in Colorado and Kansas were significantly higher than snowfall totals for the entire winter of many towns and cities across the central and eastern United States.

Washington, D.C., has measured 12.1 inches so far in January, the city's snowiest month since January of 2016. However, this is still less than half of the 26 inches measured on Tuesday in Bethune, Colorado.

The report of 27 inches at Mount Sunflower, the highest point in Kansas, was also higher than the seasonal snowfall totals in Boston, New York City and Philadelphia combined, which as of Tuesday totaled 24.3 inches.

However, the Northeast cities along the Interstate 95 corridor will soon get their share of snow with a major winter storm on the horizon.

AccuWeather meteorologists are warning that the weekend storm in the Northeast could evolve into an all-out blizzard in some areas with strong winds and over a foot of snow.