An early-season snowstorm blasted several northern states with significant snowfall on Tuesday, with accumulations in Minnesota's Twin Cities shattering a record that had stood since Theodore Roosevelt's second term as president.

Conditions began deteriorating across Minnesota on Tuesday early in the afternoon as a winterlike storm caught the state in its crosshairs.

The National Weather Service issued a winter storm warning for parts of central Minnesota and west-central Wisconsin for the first time since mid-April, giving residents a taste of what is around the corner. AccuWeather forecasters had been calling for the storm to dump between 6 and 12 inches across the Minneapolis area.

As early in the season as it seems for snowfall, it wasn't the first time that flakes have flown in the autumn air. The Twin Cities had already observed the first snowfall of the year with 0.2 of an inch on Oct. 16 and a trace amount of snowfall on Monday, Oct. 19. The cities had yet to reach the first inch of snowfall for the season, but that changed in dramatic fashion on Tuesday afternoon. 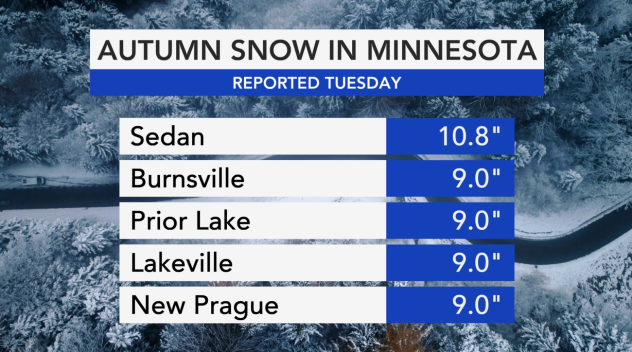 By Tuesday evening, the Minneapolis-St. Paul International Airport reported 7.9 inches of snow, the earliest in the season that the Twin Cities have measured this much snow. The airport fell just shy of its all-time snowiest October day, which stands at 8.2 inches from Oct. 31, 1991.

Previously, the earliest that 4 inches or more of snow had fallen in Minneapolis was on Oct. 29, which occurred more than a century ago in 1905. On that date, 5.5 inches were recorded.

This was also the 10th time since the late 1800s that the cities have received an inch or more of snowfall before Oct. 21, according to the National Weather Service.

On average, the Twin Cities see their first measurable snowfall by early November. This out-of-season snowfall comes only a day after a separate system blanketed Iowa in a thick layer of snow, some places such as Des Moines saw up to nearly 10 inches.

Sedan, Minnesota, recorded the most snow with 10.8 inches falling by Tuesday night.

The heavy snowfall snarled travel across the region and led to more than 1,000 crashes and spinouts on Minnesota roadways, according to the Minnesota State Patrol. Forty-eight of the crashes resulted in injuries, but no fatalities have been reported.

Prior to the snowstorm, AccuWeather meteorologists noted that this would be a heavy, wet snow that could result in downed trees and power lines.

To date, a swath of snowfall has covered states from Idaho to Nebraska to Illinois over the past 72 hours.