Over a foot of snow may fall in some parts of the Northeast when the storm is all said and done.

A weather battle zone will continue to take place as winter fights back in the northeastern United States with areas of flooding rain, dangerous ice and a blanket of heavy snow through Friday.

The storm may become the latest system to be classified as a "bomb cyclone" if the barometric pressure crashes 0.71 of an inch of mercury in 24 hours from Thursday night to Friday night.

"It's going to be close, but the takeaway is that this storm will continue to have major impact as it moves along with focus now on the Northeast states," AccuWeather Meteorologist Jesse Ferrell said.

"The storm has already produced the lowest barometric pressure since Sandy in eastern Pennsylvania," Ferrell added. 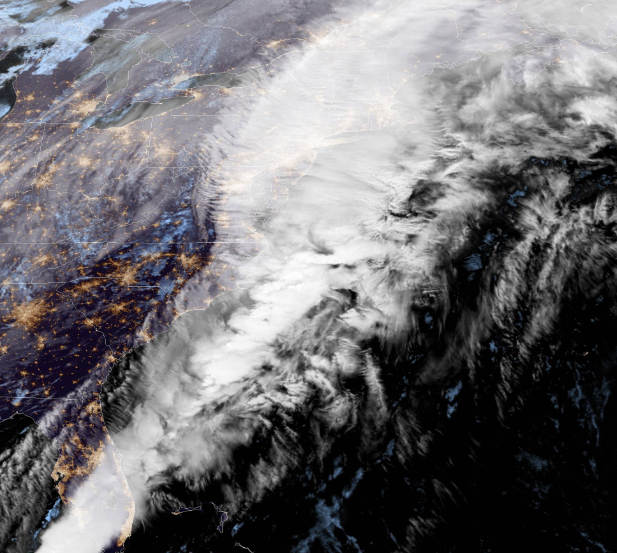 This satellite image, captured early Friday morning, Feb. 7, 2020, shows a large shield of clouds extending from Florida to Atlantic Canada and indicative of a major storm in the eastern United States. (NOAA / GOES-East)

The multifaceted storm will continue to affect the region just days after springlike warmth surged in. It is the same storm system responsible for heavy snow over the southern Plains on Wednesday and flooding and severe weather in the South.

Mild conditions will hold along the mid-Atlantic coast and in southeastern New England for the storm's duration, but cold air that recently returned to the interior Northeast is having wintry consequences across parts of the central Appalachians and the northern tier.

Copious amounts of moisture are being wrung out by the strengthening storm system. Enough precipitation either in the form of rain, ice or snow is forecast to cause travel disruptions over a broad area.

The storm brought a soaking rain from Roanoke and Richmond, Virginia, to Washington, D.C., Baltimore, Philadelphia and New York City during Thursday afternoon and night. Another period of rain and even severe thunderstorms moved through these areas prior to the arrival of drier air later Friday. 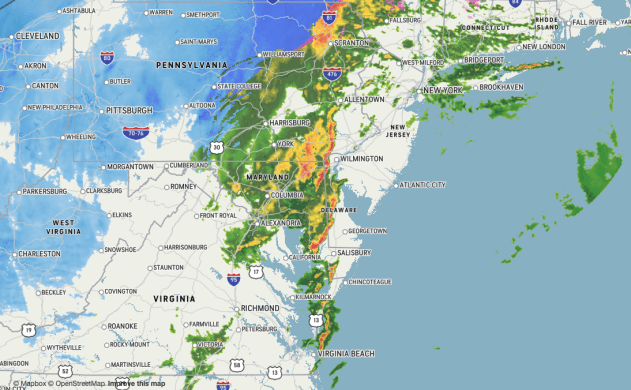 Tornado warnings were issued north of Baltimore and Washington, D.C., early Friday morning due to rotation indicated by Doppler radar. A tornado warning was issued for the Wilmington, Delaware, area during the midday hours.

As winds pick up behind the rain and the storm lifts to the north, the saturated state of the ground can cause an unusually high number of trees to topple in the mid-Atlantic and southern New England regions on Friday in lieu of tornadoes and thunderstorms. The strongest gusts, from the southwest and west reach between 50 and 65 mph. 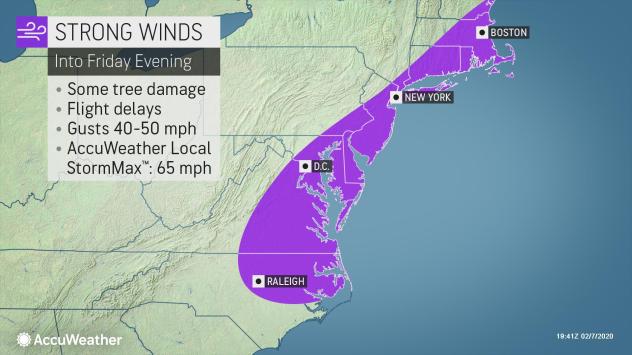 Sporadic power outages and property damage can occur. People should avoid standing under or parking under trees in this situation.

For the northern tier of the Northeast, there will be an all-out snowstorm into Friday night, according to Chief On-Air AccuWeather Meteorologist Bernie Rayno. 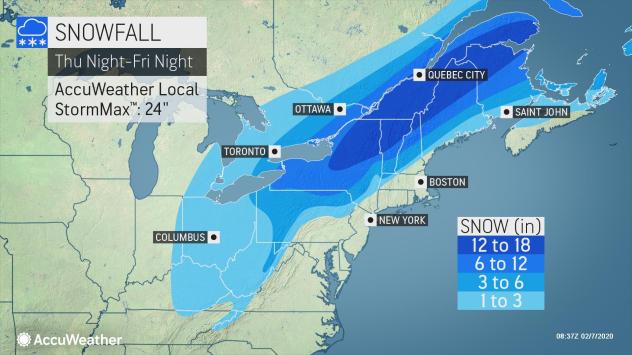 This band of heavy snowfall will continue to pivot northeastward throughout the day on Friday.

"A general 6-12 inches of snow will fall in the swath from parts of northwestern and north-central Pennsylvania to central and northern Maine but a 12- to 18- inch band is in store farther over the northern tier of the Northeast where an AccuWeather Local StormMax™ of 24 inches is likely," Rayno said. 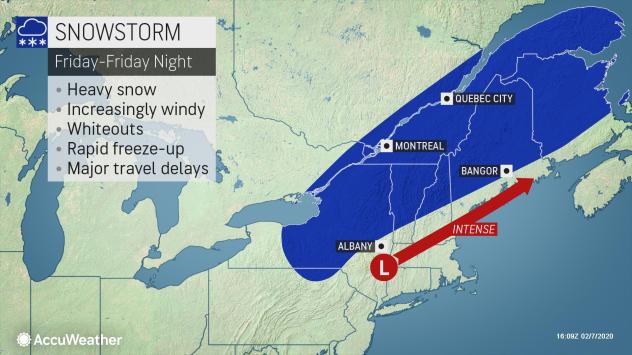 While temperatures surged to record-challenging high levels along the Atlantic coast on Friday, a press of colder air can lead to a quick freeze over the Appalachians and the Ohio Valley where snow continued into the evening or fell for a time on Friday.

Some colder air will spill into parts of the interior South and along coastal areas of the mid-Atlantic and southern New England Friday night.

However, since the next storm is forecast to take a northerly track across the Great Lakes this weekend and then over the St. Lawrence Valley on Monday, any substantial snow from it will tend to be limited to the northern tier of the Northeast.