Blizzard warnings issued in northern US ahead of major snowstorm

A fierce storm emerging from the West will charge across the northern U.S. this week and unleash snow, ice and gusty winds that could lead to whiteout conditions.

After dumping feet of snow across the highest elevations of California, a strengthening storm will unleash an early dose of winter weather across the central U.S, with blizzard conditions forecast in some areas of the northern Plains, according to AccuWeather meteorologists.

Periods of snow persisted on Wednesday morning across portions of Utah, Idaho and up to Montana. The storm will emerge in the Front Range of the Rockies on Wednesday evening and become even more intense.

“This will be the first major snowstorm of the season for the northern Plains and the combination of heavy snow, powerful winds and low visibility will result in hazardous travel,” AccuWeather Senior Meteorologist Brian Wimer explained. 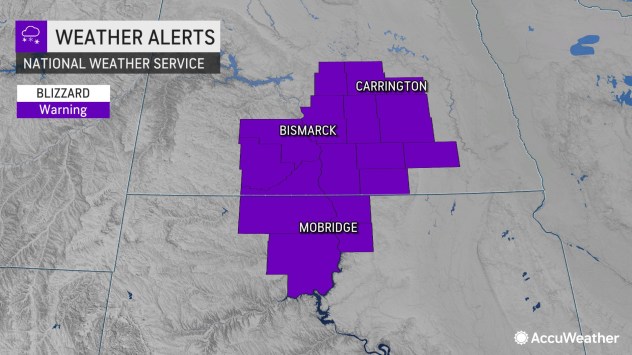 "This will be the first major snowstorm of the season for the northern Plains and the combination of heavy snow, powerful winds and low visibility will result in hazardous travel," AccuWeather Senior Meteorologist Brian Wimer explained.

Cities such as Fargo and Bismarck, North Dakota, and Rapid City, South Dakota, could experience blizzard conditions as winds whip across the region Thursday night into Friday with blowing and drifting snow. 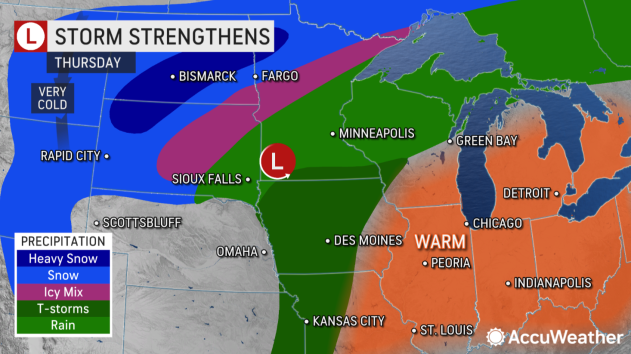 The National Weather Service issued blizzard warnings for a number of counties in the Dakotas as of Wednesday.

It is possible the storm exceeds the blizzard criteria of one-quarter-mile visibility or less with winds of 35 mph or greater for three consecutive hours. Should the storm develop to its full potential, gusts may frequent 50 mph with near-zero visibility in some cases over parts of the northern Rockies and Plains.

Travel will be nearly impossible along portions of Interstates 29, 90 and 94. Winds may gust past 50 mph at times, creating whiteout conditions. This may impact the commute home from work on Thursday evening and the morning commute on Friday. Travelers should also prepare for widespread flight delays and cancellations at airports across the region. 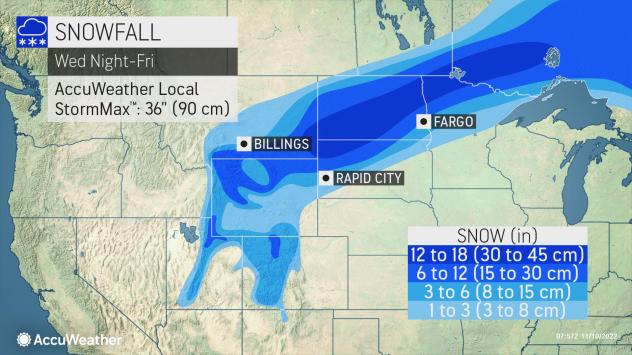 Billings, Montana; Capser, Wyoming; and Rapid City are all predicted to pick up 3 to 6 inches of snow.

Rapid City had started off November over 15 degrees above normal as temperatures soared to near record-breaking thresholds. On Nov. 1 and 2, the city reached 75 degrees, just a few degrees shy of breaking records set in the early 1990s. Not only has it been unseasonably warm in Rapid City, but it has also been in a snow drought.

Normally, the city would have picked up close to 9 inches of snowfall in September and October, but this year the city has recorded only 0.1 of an inch of snow, just 1% of its normal snowfall for this time of year. This storm alone could bring Rapid City back to near-normal snowfall standings. 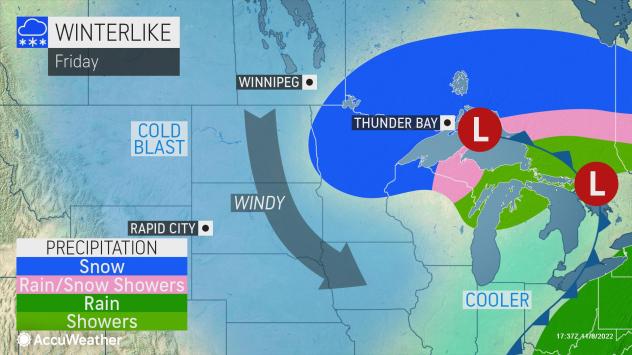 In addition to the snow, cold air is expected to blast into portions of eastern Montana through the Dakotas from Thursday to Friday where AccuWeather RealFeel® temperatures will likely be below zero.

The blast of cold air will even reach locations unlikely to receive much or any snow accumulation from this storm, such as Omaha, Nebraska. The city of Omaha could experience a high temperature drop of more than 25 degrees in less than 24 hours. 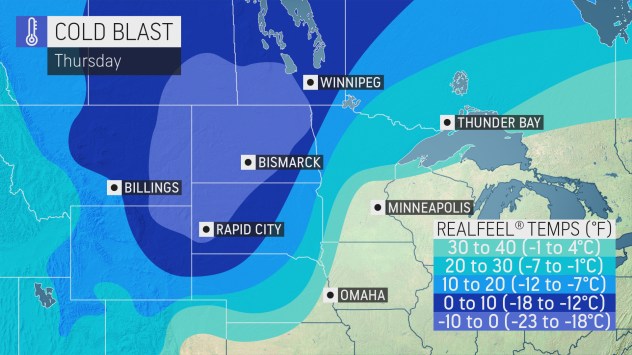 "Farther south and east, enough warmer air may move in aloft to produce a narrow band of sleet and freezing rain from South Dakota to Minnesota Thursday into Thursday night, which may lead to icy roadways," Anderson explained.

The center of the storm is expected to bring blizzard conditions farther west Thursday into Friday as cold air pushes east. Blowing snow could impact most of the state of Minnesota Friday afternoon.

The storm will push farther east into eastern Canada, posing no wintry concerns to the Northeast this weekend, but cold and brisk conditions will filter in behind the storm in the Midwest.

On the southern side of the storm, as it intensifies Thursday, there will be a threat for severe thunderstorms across portions of the Midwest. 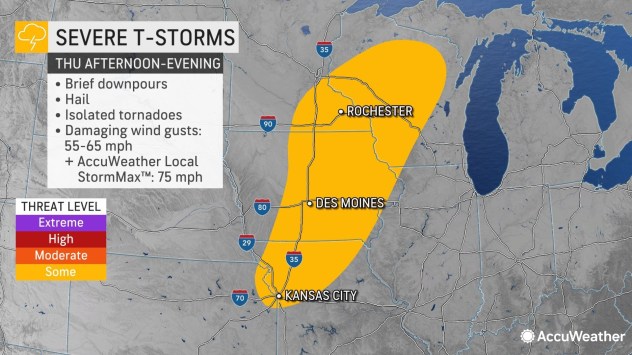 Areas from southeastern Minnesota and central Wisconsin to northeastern Kansas and northern Missouri should be on alert for thunderstorms, capable of being severe, to erupt Thursday afternoon and evening. This includes cities like Omaha, Nebraska, Des Moines, Iowa and Kansas City, Missouri. Brief downpours and damaging winds are likely to be the most widespread impacts; however, some thunderstorms could produce hail or a tornado or two.

Motorists should be on alert for gusts of stronger winds that could bring slowed travel and be a hindrance for higher-profile vehicles.