Tree branches snapped off of trees after a winter storm coated everything in ice in Norman, Oklahoma, on Oct. 27.

The pandemic has warped many people's perception of time, but some Americans can be excused for double-checking their calendars this week. It seems like Mother Nature has also lost track of time this year. For scores of people living in states across the Rockies and middle of the country, late October is looking more like late January with record-breaking snowfall blanketing states from Montana to New Mexico.

According to AccuWeather Senior Meteorologist Bill Deger, accumulating snowfall was the result of a powerful storm combining with a deep dip in the jet stream.

October snowfall is fairly typical for most of the region, but the magnitude of the storm system that lunged across the West was "certainly impressive," Deger said. 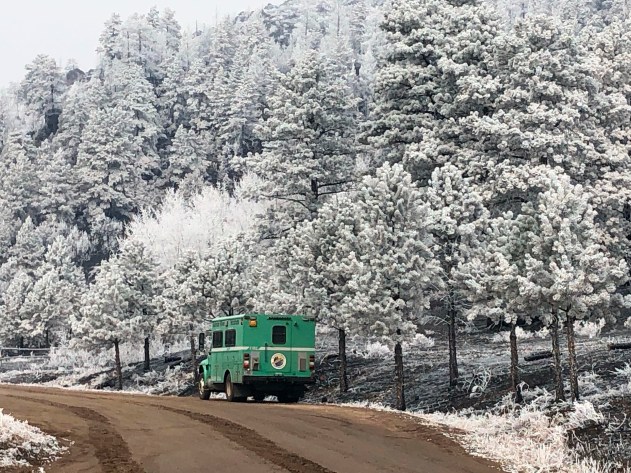 In this Friday, Oct. 23, 2020, photo released by the U.S. Forest Service shows light snow at Division X of Cameron Peak Fire at the Rocky Mountain Park in Colo. Snow and cold weather on Sunday put a damper on a wildfire that has forced thousands of people to evacuate in northern Colorado and burned part of Rocky Mountain National Park, but fire officials warned it would not be enough to put out the East Troublesome Fire. (U.S. Forest Service via AP)

Snowfall totals from the storm ranged from 5 to 25 inches and spanned from Washington down to New Mexico. For some cities, the single storm's snowfall pushed the monthly totals over the edge and led to several broken records.

According to the National Weather Service office in Great Falls, Montana, the city shattered its October snowfall record with nearly 28 inches accumulated over the span of only nine days, compared to the record of 18.5 inches set in 1925. 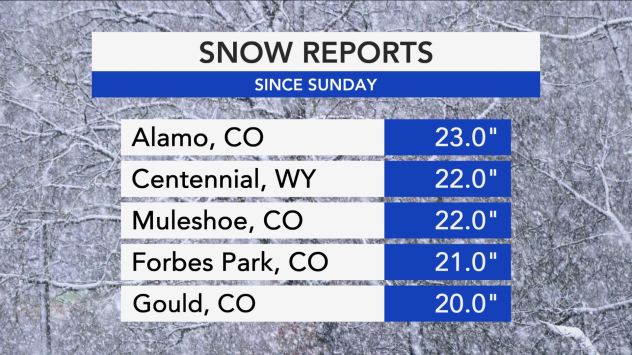 Farther east, Minneapolis also broke its October snowfall record of 8.2 inches from 1991, with 9.3 inches having fallen so far this month.

Precipitation fell so heavily that more than two dozen airports reported thunder along with falling snow and freezing rain in a three-hour timespan early on Monday, according to AccuWeather Senior Weather Editor Jesse Ferrell. 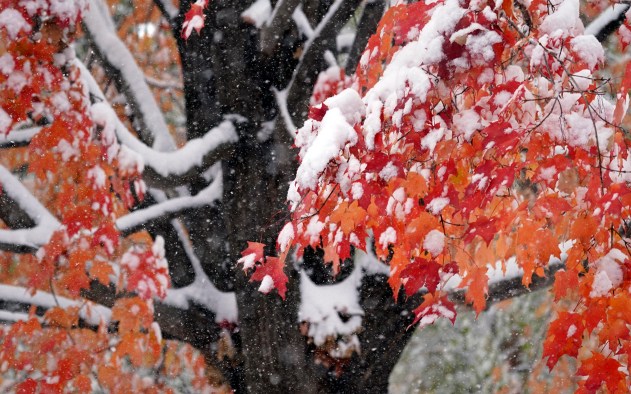 The first measurable snow of the season graces colorful leaves on a tree at peak color, Tuesday, Oct. 20, 2020, in Minneapolis. (AP Photo/Jim Mone)

On top of the record-breaking snow, many areas felt teeth-chattering cold with temperatures falling well below previous record thresholds. The lowest reading of the weekend came from Potomac, Montana, which dipped all the way down to minus 29 F on Sunday.

A photo posted on Twitter by the NWS Missoula office showed the minus 29.2-degree reading on a Nimbus digital thermometer alongside a photo of cattle on a snowy range huddling together looking as though they were attempting to stay warm in that brutally cold air.

The sensational photo was shot by Justin Iverson, a third-generation cattle rancher in Potomac who along with his wife owns Iverson Ranch. Iverson, 43, told AccuWeather in an email, "It's rare to have it this cold in October, but we did hit minus 14" last year on Oct. 29. "The combination of 18 inches of snow followed by brutal cold was unprecedented." But, he said, there wasn't "much wind and this weekend was perfectly calm and sunny." He added, "This would have been unimaginably brutal if we had to deal with wind chill as well." 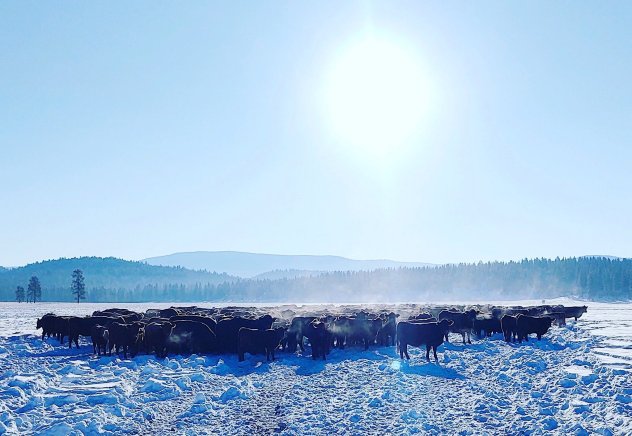 A herd of cattle in a snowy field on a ranch in Potomac, Montana, where the temperature plummeted to minus 29.2 degrees F over the weekend. Third-generation cattle rancher Justin Iverson told AccuWeather the historic cold was brutal, but conditions would’ve been unimaginable in the Blackfoot Valley had there been wind and had the skies not been clear and sunny. (Justin Iverson)

As for the cows, Iverson said the temperature often plunges to minus 30 in January and February, and the cattle can handle it. "As long as they have plenty of feed and access to clean water they do fine," he said. But the snow that came in before the Arctic air meant the cattle were forced to make some changes to their routine.

"This time of year our cows are usually out grazing the hay meadows, but the snow limited access to the grass so we've been feeding alfalfa hay for the last few days and hope to thaw out and get back to grazing," Iverson said.

There were a slew of breathtaking low temperatures recorded around the state.

“It’s not normal to set this many records in this short of a time – and monumental records,” Corby Dickerson, a meteorologist in the NWS Missoula office told AccuWeather. Dickerson has been working as a meteorologist at the NWS for 15 years and described the historic cold snap as "a once-in-a-lifetime opportunity" for a forecaster given how early this type of extreme cold swept in. 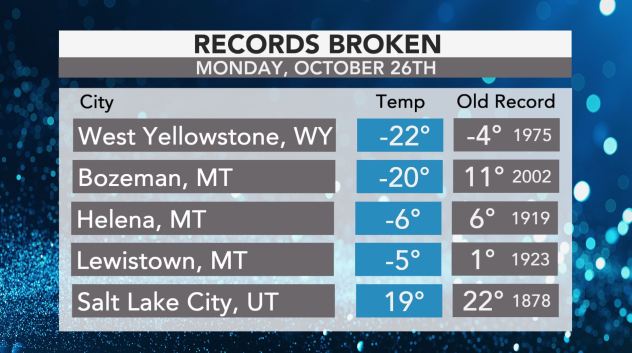 Perhaps, as the NWS Great Falls put it, the "winner" was Bozeman, Montana, which saw the biggest departure from its daily record. Bozeman, which The Washington Post reported has seen an influx of people relocating there from big cities during the pandemic, reached a low of minus 20 F, some 31 degrees below its previous record low of 11.

However, the early-season low temperatures and snowfall were made all the more dramatic by a yo-yoing effect, not all too unfamiliar for the Front Range of the Rockies. 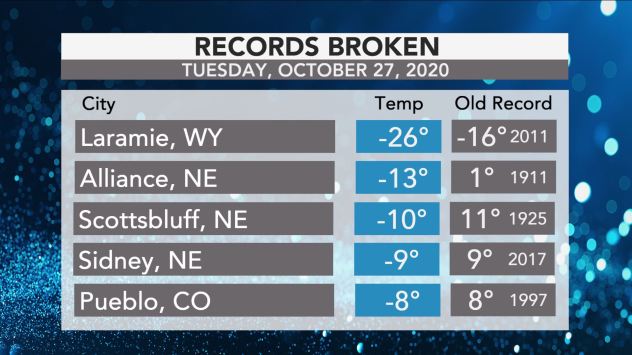 In Denver, for example, the temperature topped out at 78 degrees last Wednesday and plunged to 4 F on Monday morning. By Friday, temperatures in the city are forecast to jump back up into the low 60s.

New all-time record lows for the month of October were set in Laramie, Wyoming, and Scottsbluff and Sidney, Nebraska, on Tuesday.

Monthly (October) record lows were broken in parts of Wyoming and Nebraska today. Scottsbluff & Sidney actually broke monthly records on Monday, only to out-do them on Tuesday.https://t.co/y9WLorVQk2#newx #wywx pic.twitter.com/iKnq0VdCKe

"Since it is still October, which is considered a transition month, it is not unusual to see such a dramatic swing in temperature in such a short amount of time for this part of the country," Deger said, adding that the temperature fluctuations are certainly pushing the boundaries for what is considered normal.

Wichita, Kansas, recorded a daily record snowfall of 1.3 inches on Monday, beating out the old daily record of 0.5 of an inch set all the way back in 1913. The accumulation of snow was also the most snow the city has ever picked up this early in the season, according to the National Weather Service. 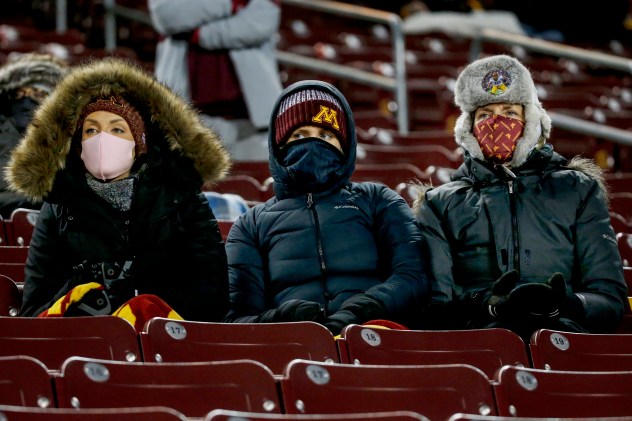 The most significant ice accumulations have been observed in central Oklahoma. By Tuesday evening, over 1.50 inches of ice was measured in Calumet, Oklahoma, located just around 30 miles west of Oklahoma City. 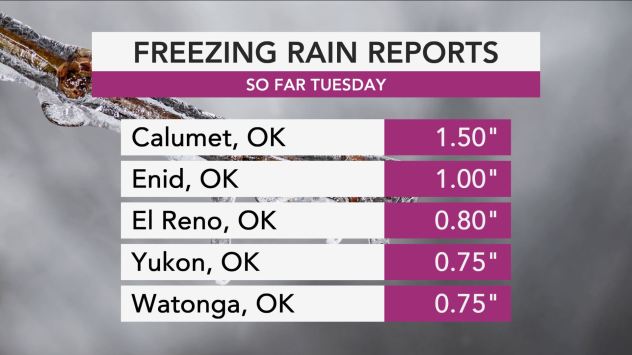 Ice built up on trees that had yet to shed their leaves, weighing down branches and causing limbs to snap, including in downtown Oklahoma City and Norman, Oklahoma. In some instances, the branches brought down power lines as they fell to the ground. 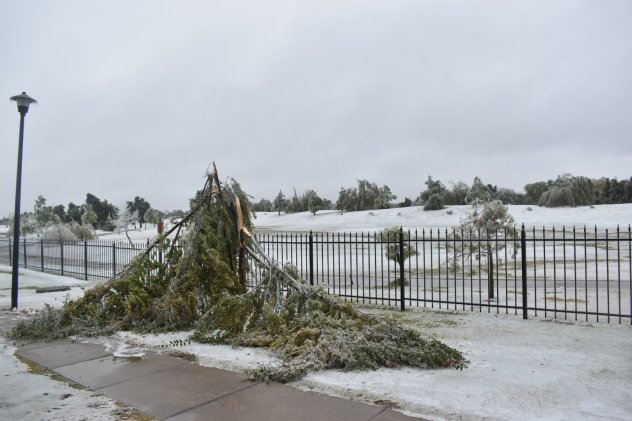 Tree branches snapped under the weight of ice in Norman, Oklahoma, on Oct. 27, 2020. (Twitter/ @ohheyitssteph)

The ice in Oklahoma led to over 300,000 power outages early Wednesday morning, according to PowerOutage.us. Another 42,000 were without power in Texas in areas where freezing rain accumulated. Power outages may continue to rise before the winterlike storm departs the region later Wednesday.

For those residents accustomed to typically warm autumn conditions in the southern Plains, temperatures should return to normal by the end of the week.

"Fortunately, following this big storm and cold blast, and the several smaller ones that preceded it last week, it appears the pattern will change to a drier, gradually warmer one across much of the Rockies and Plains as we head through the end of this week," Deger said.