A snowstorm hitting the NWS Caribou office in Caribou, Maine, on Dec. 3, left a lot of accumulation in just an hour with stronger winds and 2 inches of snow in just 45 minutes.

A major storm that began across the country just before Thanksgiving is slowly winding down off the far eastern coast of New England. The first snowstorm of the season dumped 3 feet of snow in New Ipswich, New Hampshire, and blanketed many other states with upwards of 2 feet of snow.

The storm arrived in the region late Saturday but ramped up on Sunday, which led to broken records and disastrous travel conditions.

"A typical nor'easter will produce accumulating snow for 10 to 16 hours in any one spot, but this one caused accumulating snow over a large area for more than 24 hours. In parts of New England, it ended up being about 36 hours," AccuWeather Meteorologist Dave Bowers said.

Nearly 1,000 accidents were reported in snowy conditions across the Northeast, prompting officials to declare a state of emergency and to warn people to stay off the roads unless absolutely necessary.

On Tuesday morning, nearly 19,000 customers were without power in Pennsylvania, about 10,000 outages were reported in the state of New York and nearly 50,000 were listed in New Jersey, according to PowerOutage.us. By Tuesday night, those numbers dwindled significantly.

Some of the highest snowfall amounts came around central New York, where some locations received more than 2 feet. The state capital of Albany fell just short of the two-foot mark. 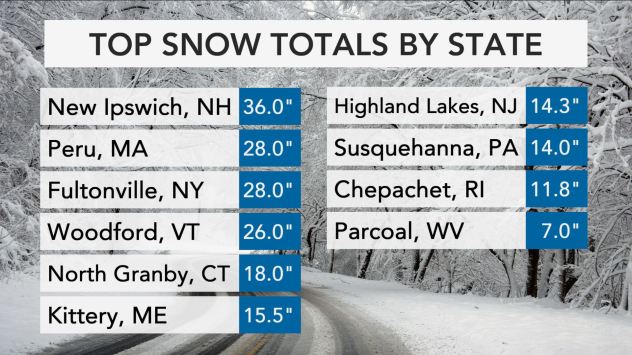 The final three-day storm total at Albany International Airport was 22.6 inches, making it the eighth biggest snowstorm all-time in the city's recorded history and the fourth biggest December snowstorm in Albany history.

"This is also the most snow in one storm since the March 13-14, 1993 superstorm," the National Weather Service in Albany said on Twitter.

The 13.3 inches that fell at the airport on Sunday broke the previous daily record for Dec. 1 of 3.7 inches from 1969. On Monday, another daily record was broken when 6.8 inches fell, surpassing the city's old total of 6.2 inches from 1949.

AccuWeather National Weather Reporter Dexter Henry was in Albany and spoke to one area resident about how the city was responding to the storm.

"I think [Albany Mayor] Kathy Sheehan did a great job with this first snowstorm and I think because it was such a doozy this year, [city officials] were ready for it," Albany resident William Yager told Henry.

"When it's just a dusting the first couple times [of the season], nobody's ready," Yager said. "But this [storm], they were ready."

Sheehan would eventually issue a snow emergency that went into effect at 8 a.m. Tuesday.

"At that time, all normal parking rules and regulations are temporarily suspended," she wrote on Twitter.

Classes were canceled on Monday at the University at Albany due to the storm.

More than 770 flights within, into or out of the US were canceled on Monday, according to FlightAware.com, with many of them including the New York and Boston airports.

The New York City Department of Transportation warned commuters of delays on the Staten Island Ferry during the Monday evening rush hour due to reduced visibility caused by inclement weather. 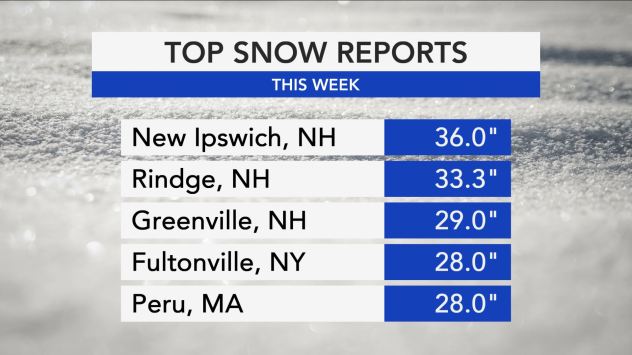 New York Gov. Andrew Cuomo directed non-essential state employees in the state's capital region to stay home Monday. Cuomo issued a statement on Monday morning saying he was declaring a state of emergency for seven counties and was deploying 300 members of the National Guard to assist with snow removal and clean-up operations.

"It's still dangerous out there," Cuomo said on Twitter, adding that state troopers have responded to more than 740 storm-related crashes statewide.

"Staying off the road allows first responders to do their job," he said.

Around 7 p.m. Monday, a bus carrying 30 passengers was involved in a crash on the New York State Thruway, Cuomo said. All lanes on the eastbound stretch of road were blocked for a time, but there were no life-threatening injuries.

Farther east, snowfall totals ranged from several inches along the coast of Massachusetts to more than a foot in Rowe, located in the northwestern part of the state.

Snowfall totals in Boston ranged from about 1 inch in coastal neighborhoods to about 4.5 inches in the West Roxbury and Brighton areas by late afternoon Monday, according to Boston Mayor Marty Walsh. By Tuesday afternoon, about 7 inches had fallen around the city.

Because of the storm, Boston Public Schools declared a snow day on Tuesday.

"The snowstorm continues to intensify across our state, which will affect our roads with heavy snow and black ice,” Gov. Murphy said in a press release. “I strongly urge all travelers to use extreme caution and allow crews plenty of room to keep our roads clean and safe. My Administration will continue to monitor the storm and will take every necessary step possible to ensure the safety of our residents and commuters."

We’re closely monitoring today’s winter storm and are working to assess the damage from yesterday’s storm.

As snow and freezing rain continue to fall, please use extreme caution when traveling. We want everyone in New Jersey to stay safe. pic.twitter.com/h7JOwyCghg

According to the New Jersey State Police, officers responded to about 428 car accidents and 312 motorist aids (spinouts and other incidents that aren't deemed accidents) as of 6 p.m. Monday.

The heavy snow Monday was considered the second phase of a "double-barreled" storm system. The first phase of the storm included freezing rain and sleet which turned some roads icy in parts of Pennsylvania, New York and New Jersey.

Snow, ice storm to hit travel hard in northeastern US during first days of December Train of West Coast storms to continue into late week Dangerous storm hinders travelers from Central to Northeastern US

Prior to wreaking havoc in the Northeast, the storm system bombarded parts of the Central states with heavy snow and blizzard conditions.