Areas across the northeastern United States that are digging out from the recent blizzard will be at risk for more snow and travel disruptions into Monday.

Two storms will take aim at the region. One storm will skirt across the upper reaches of the Northeast through Saturday. A second, more potent storm will follow Sunday into Monday with blizzard conditions.

A swath of snow will skirt along the leading edge of mild air across the Northeast through Saturday.

A general coating to 3 inches of snow is expected from New York to Maine and Massachusetts. 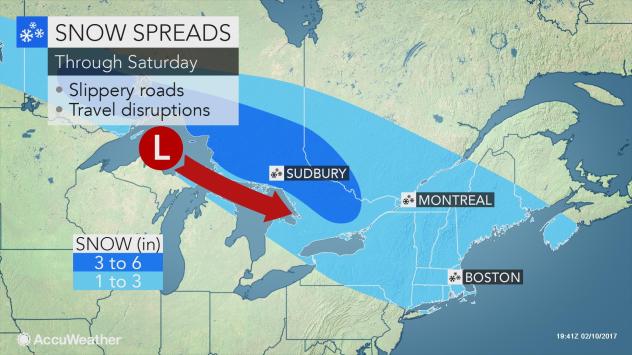 Another 1 to 3 inches of snow is in store for Boston by Saturday afternoon after nearly a foot of snow buried the city on Thursday.

Given the recent cold, even a small amount of snow can quickly cause a slick coating on roadways.

The storm will depart by Saturday night but will give way to a new storm that threatens to be far more potent.

“From Sunday afternoon to Monday evening, another powerful winter storm set to deliver blizzard conditions is on the way for portions of New England hit hard by snowfall this past Thursday,” AccuWeather Meteorologist Kyle Elliott said. 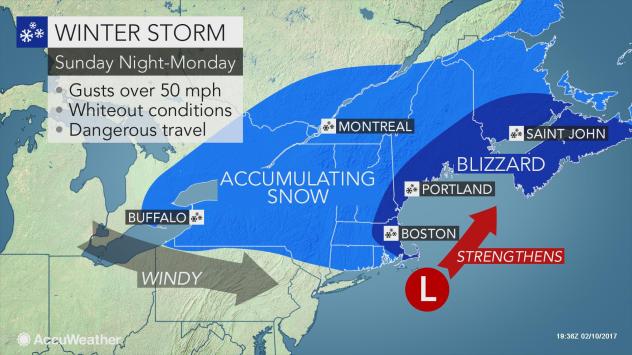 A storm is expected to strengthen off Cape Cod on Sunday night. Snow and winds will increase as a result.

Exactly where the storm intensifies and how quickly it does so will be a key factor in determining the corridor of heaviest snow and strongest winds.

Portions of central and eastern Maine will likely bear the brunt of this storm. 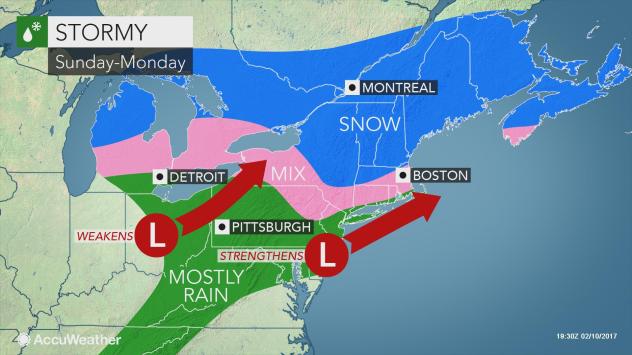 Travel will be difficult and dangerous with whiteout conditions and blowing and drifting snow. Major airline delays and cancellations are likely.

"The storm has the potential to bring 1 to 2 feet (30 to 60 cm) of snow to parts of central and northern New England and parts of the Maritime Provinces of Canada," according to AccuWeather Senior Meteorologist Alex Sosnowski. "Locally higher amounts can occur in parts of Maine and New Brunswick."

Eastern US: Potential for another winter storm to return in mid-February
Photos: 1 dead after biggest snowstorm of season snarls travel in northeastern US
10 activities to keep kids busy when you’re snowed in

“The weight of the snow, combined with fierce, howling winds, will be more than enough to bring down tree limbs and power lines,” Elliott said.

Portions of upstate New York could also be in line for a plowable snow from the storm.

Downwind of lakes Erie and Ontario, lake-effect snow will occur on the back edge of the storm.

Along the corridor from Washington, D.C., to New York City, all rain is in store as mild air takes over. Strong wind gusts, perhaps topping 50 mph, will also sweep from west to east south of the track of the storm. Thunderstorms could even occur in this swath. Temperatures will generally be 10 to 20 degrees Fahrenheit higher in these areas Saturday to Monday compared to the end of this week.

The weather pattern will remain active across the Northeast through mid-February as additional storms with the potential for snow will target the region later next week.