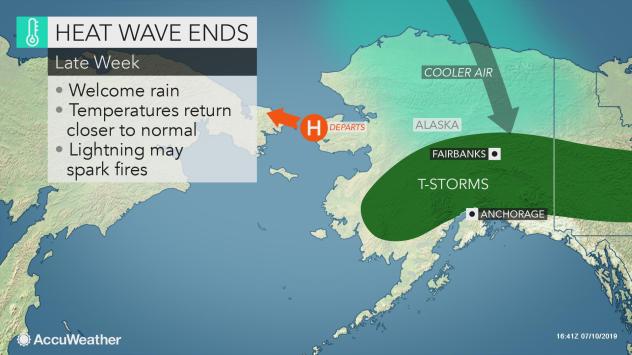 The end of the heat wave that has shattered records across Alaska is finally in sight.

In the far western portion of the state, the heat sent the mercury to an all-time record high in the city of Bethel. A temperature of 91 F was recorded on Monday, which would surpass the previous all-time record of 90 set on June 17, 1926. However, a technical problem with a weather station at the Bethel airport has left meteorologists with the National Weather Service (NWS) in Anchorage unwilling to declare a record has been set.

Cynthia Kobold, a meteorologist with the NWS, told AccuWeather in a phone interview that officials were replacing the faulty weather station and that while it was certainly warm in Bethel on Monday, they aren't confident enough in the data collected to confirm an official record has been broken. Records in Bethel date back to 1923.

While the temperature wasn't nearly as high as the Fourth of July in Anchorage when the temperature hit 90, the city did end up rewriting the record books for July 8. A new daily record of 85 F was set, surpassing the previous record of 84 from 2003. King Salmon, located in a remote southwestern portion of the state, set a record daily high of 83, breaking the 2004 record of 82. The city then tied their record for July 9 of 82. This marked the sixth consecutive day King Salmon tied or set a new daily high temperature record.

The hot and dry weather, which began just prior to the Fourth of July, will finally ease its grip later this week as cooler air returns.

This prolonged stretch of above-normal heat has led to the spread of ongoing wildfires across parts of central and southern Alaska. Residents have been impacted with smoky air and poor air quality for multiple days.

With many residents without air conditioning, this produced an uncomfortable stretch of weather. Other residents have had to close windows to keep out the smoky air, which in turn did nothing more than raise the temperature inside their homes.

The hot weather forced some residents to head to nearby lakes to cool down. 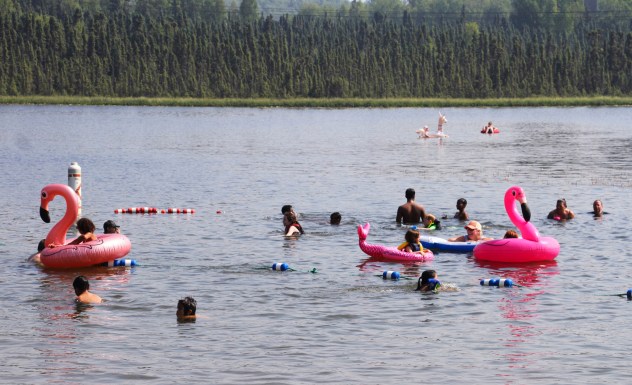 Lucy Davisdon, a resident of Alaska, took her grandchildren to a beach at Goose Lake to help get a break from the heat last week, The Associated Press reported.

She purchased a portable air conditioner six years ago at a garage sale and it has been working non-stop to help cool her home. However, the temperature inside of her home has not been able to drop below 82 degrees.

“If it wasn’t so expensive, I’d buy one of those big outdoor pools,” she said.

How much longer will this heat wave last?

A large dome of high pressure has remained nearly stationary across the region over the past week. This, combined with above-normal ocean temperatures, have led to record-breaking heat and temperatures averaging 10 to 20 degrees F above normal.

However, there is light at the end of the tunnel.

"This dome of high pressure will slowly weaken and track westward away from the state during the balance of this week," AccuWeather Meteorologist Brandon Buckingham said.

Along with the weakening of the high will be the return of cooler air and much-needed rainfall.

"Showers and thunderstorms will become more widespread for the remainder of the week, not only helping to keep temperatures down and also aid firefighters in battling the wildfires across the state," Buckingham said.

However, any bolt of lightning in a storm with little or no precipitation could trigger another fire.

Multiple locations set all-time or daily records during this heat wave. Most of these have occurred across the south-central cities, including Anchorage, Kenai, Palmer and King Salmon. King Salmon experienced a daily record on Tuesday, July 9, it was the city's sixth record in a row.

From June 28 to July 7, Anchorage set seven new daily record-high temperatures out of a possible 10, according to Buckingham.

Anchorage reached 90 degrees F on the Fourth of July, the first time that has happened on record. The previous record-high temperature was 85 F set in 1969. The normal high temperature in Anchorage is only 65 F.

While this mark was a first for Anchorage, it is not the first time the state has reached 90. The all-time high temperature recorded in Alaska is 100 F at Fort Yukon set in 1915. Fairbanks reached an all-time high of 99 F set 100 years ago.

Tuesday tied for the second warmest night of all-time at Anchorage International, with a low of 62 F. It is tied for second with five other nights. The previous daily record was 59 F in 2003. 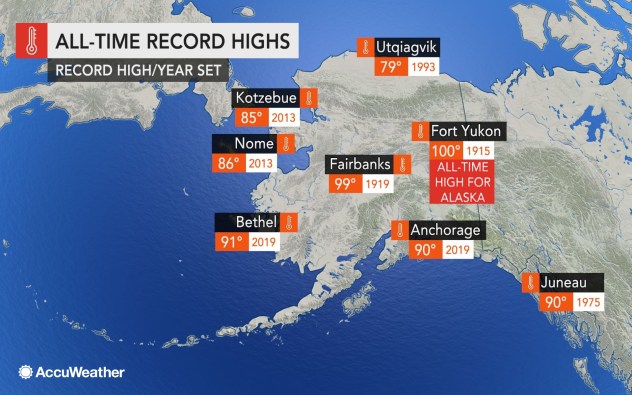 While the first week of July has been the most noticeable in terms of hot air, much of the state has been running above normal since June.

Anchorage had its warmest June on record last month with an average temperature of 60.5 degrees, which is 5.2 degrees above normal. In fact, the four warmest June months in the city have occurred during this decade.

Heat exhaustion vs. heatstroke: What are the warning signs and how should you react?
Anchorage, Alaska, shrouded by one of longest smoke events in history
VIDEO: What's the difference between heat exhaustion and heat stroke?

Wildfires continue to grow outside Anchorage and Fairbanks amid dry, hot weather

The hot and dry weather pattern across Alaska has led to an increase in not only the number of wildfires, but also the acres burned. 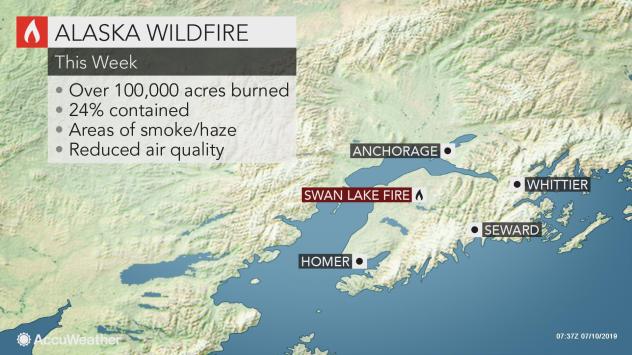 The Swan Lake Fire, ignited by a lightning strike on June 5, has now burned more than 100,000 acres and is only 24 percent contained, according to InciWeb.

A dense smoke advisory remains in effect for the western half of the Kenai Peninsula.

Smoke from this wildfire has occasionally moved over the city of Anchorage, leading to poor air quality. Wildfire smoke had become so widespread over the weekend that NOAA satellite imagery showed clouds of the smoke wafting across large portions of the state.

Extensive smoke from the wildfires in Alaska and Yukon blanketed the region on July 8, 2019, as seen here by NOAA's #GOESWest. More imagery: https://t.co/DxoW1l8h8z pic.twitter.com/Klt0QHa7ht

Alaska officials have closed part of the Chugach National Forest to all users due to health and safety concerns with the Swan Lake wildfire approaching, according to the AP.

The Montana Creek Fire started north of Anchorage on July 3. This fire has consumed less than 400 acres and is 40 percent contained.

Download the free AccuWeather app to check on the latest forecast and temperature trends in your community. Keep checking back for updates on AccuWeather.com and stay tuned to the AccuWeather Network on DirecTV, Frontier and Verizon Fios.