What are Chinook winds?

While strong winds often occur during a storm, there are some instances in western North America where destructive winds may develop when the sky is clear.

The winds described in this case are referred to as Chinook winds.

The term Chinook is derived from the Native American people who lived in the geographical area from where the wind originates. The Chinook people lived in the vicinity of the Columbia River, which forms the present-day boundary of Washington and Oregon. However, often the brute force of the Chinook wind is not realized until the air flows hundreds of miles farther to the east and over the Rockies.

"Often these winds are directed by the circulation around a large storm moving in from the Pacific Ocean, but not all the time," according to AccuWeather Senior Meteorologist Brett Anderson.

"Chinook winds are most common from the late autumn through the winter and into the early spring," Anderson said.

"This is the time of the year when the jet stream is the strongest and storms are most active."

In the absence of a strong storm, a straight-line jet stream set up from west to east across the nation can be enough to generate a significant Chinook event.

As air flows in from the Pacific Ocean and across Washington, Oregon and sometimes British Columbia, Canada, it blows uphill over the western slopes of the Rockies, where it sometimes generates clouds and rain and/or snow. 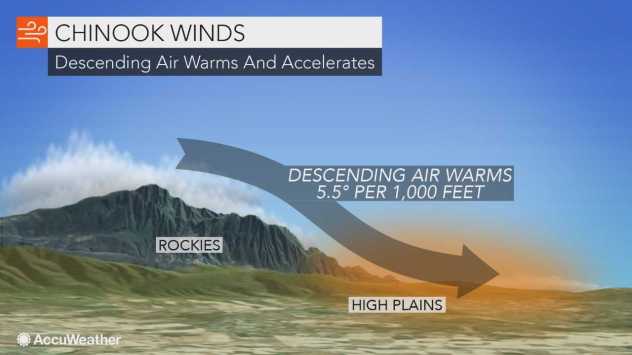 As the winds blow downhill thousands of feet from the high elevations of the Rockies to the Plains, they pick up speed due to gravity. In this area east of the Rockies, there is often no precipitation and clouds may disappear in the dry air.

A 40- to 50-mph wind over the ridges and passes may reach speeds of 80 to 100 mph by the time the air reaches the foothills and High Plains.

At this force, trees and power lines can be knocked down, vehicles may be pushed off the road and trucks may be flipped over. Significant property damage may also occur.

During very dry conditions, dust storms can occur during a Chinook wind event.

Where snow is on the ground, blizzard conditions may develop, before the snow melts in the warmth or evaporates in the dry air.

"Chinook winds are most frequent in Montana but are common in Wyoming and Alberta and can occur as far south as Colorado," Anderson said.

Blizzards: The fiercest of winter’s fury defined
What’s the difference between straight-line winds and tornadoes?
How do avalanches occur?

"Another common occurrence during a Chinook wind event is for the air to warm dramatically from the ridges to the foothills and plains below," he added.

The greatest temperature rises in the United States have occurred during Chinook wind events in Montana. In these cases, Arctic air was quickly eroded by mild air from the Pacific Ocean.

Loma, Montana, holds the world record for the greatest 24-hour temperature change. On Jan. 15, 1972, the temperature rose 103 F, from 54 degrees below zero Fahrenheit to 49 above zero.

On Jan. 11, 1980, at Great Falls International Airport, Montana, the temperature rose from minus 32 F to 15 F in seven minutes. This 47-degree-Fahrenheit rise is the record for the most rapid temperature change in the U.S.

During a more typical Chinook wind warming event, temperatures may rise 25 to 50 degrees.

Occasionally, air that has been warmed by this process can reach thousands of miles across the Mississippi River and into the Eastern states.