US West Coast to endure record-challenging heat this week

Temperatures will climb to their highest levels yet this year from California to Washington this week, putting a number of record highs in jeopardy.

The upcoming heat wave follows a spell of cool, unsettled weather with high-elevation snow in the Northwest to end this past week.

Instead of throwing on an extra layer before heading outside, people will be seeking ways to cool off as temperatures climb as high as 20 degrees Fahrenheit above normal.

Typical high temperatures for this point in June vary from the lower 90s in Fresno, California, to lower 80s in Medford, Oregon, and near 70 in Seattle.

A building area of high pressure will first send thermometers soaring across California's Central Valley into Tuesday before the heat expands northward along Interstate 5 during the middle days of the week. 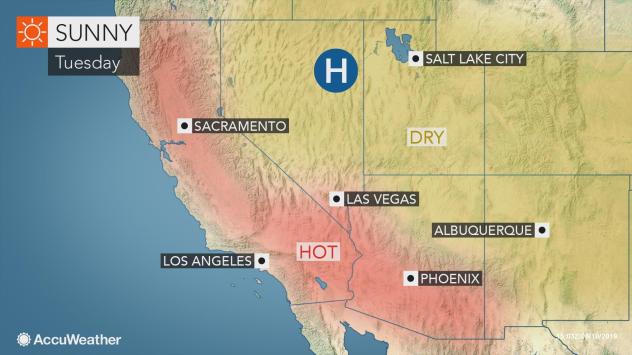 Gusty winds accompanied the start of the warming trend over the weekend.

A fire that broke out near Rumsey, California, on Saturday afternoon grew from 125 acres to 600 acres in less than two hours as it was fanned by the winds, according to The Sacramento Bee. As of Monday evening, the fire had grown to 2,200 acres but was 50 percent contained, according to Cal Fire. Evacuation orders that had been in place along County Road 41 were lifted on Monday afternoon.

High temperatures will exceed the century mark in much of Central California early this week, according to AccuWeather Meteorologist Brett Rathbun.

The mercury also reached the century mark in San Francisco on Monday, shattering the old record of 94 degrees from 1994.

Here is a round up of all the daily temperature records that were broken or tied across the region today.#CAwx #CAheat pic.twitter.com/BgJGHKdCQy

Portland, Oregon, is expected to hit 90 for the first time this year on Tuesday, according to AccuWeather Senior Meteorologist and western U.S. blogger Brian Thompson. 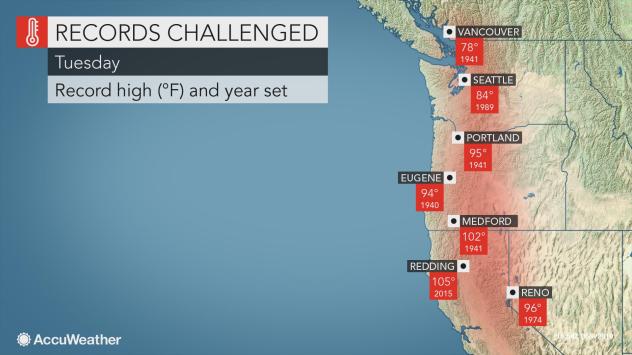 "The middle of the week can be even hotter in Portland as temperatures soar into the upper 90s, which would break the city's record high of 93 from 2002," according to AccuWeather Senior Meteorologist Kristina Pydynowski.

Temperatures in Seattle will reach record territory as they approach 90 on Wednesday.

AccuWeather’s new RealFeel Temperature Guide provides unique outdoor insight 5 foods to help you beat the heat Heat exhaustion vs. heatstroke: What are the warning signs and how should you react?

Medford, Eugene, Salem and The Dalles, Oregon, and Olympia, Everett, Yakima and Spokane, Washington, are among other communities that can put new stamps in the record books this week. 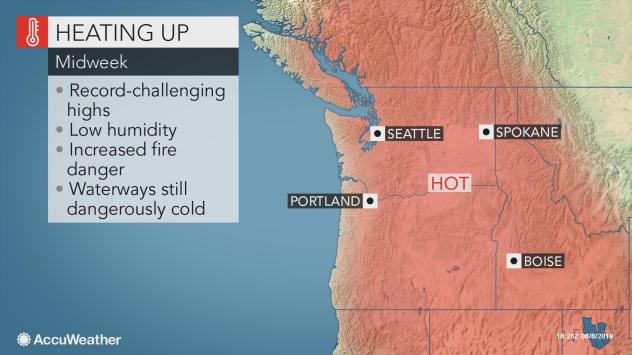 The many Pacific Northwest residents who do not have air conditioning may want to consider spending time in cooler public buildings during the midday and afternoon hours.

Necessary precautions should be taken while outside during the heat wave, including wearing light-colored clothing, taking frequent breaks in the shade and drinking plenty of water.

Playground equipment that is directly in the sunlight can become hot enough to cause serious burns, so avoid making use of them during the hottest time of the day.

Double check vehicles before locking the doors to make sure pets and children have not been left behind.

Eleven children have died in hot cars so far this year, according to KidsandCars.org.

Firefighters are still working to contain a fast-moving wildfire in the Tonto National Forest in Arizona. According to officials it when it was first called in around noon on Friday when it was only five acres, but as the hours ticked on, the fire grew massively. According to reports, its now believed to be over 5,000 acres.

"While many residents and tourists will want to head to the beaches and rivers in the region to cool down, water temperatures remain dangerously cold, which can increase the risk for cold water shock," Rathbun said.

Never head out into a body of water alone or without a life jacket.

While the recent cool spell assisted firefighters in gaining the upper hand on the Highway 243 Fire in central Washington, the upcoming pattern will be conducive for new fires to spark.

"The hot and mostly dry weather will increase the risk for wildfires," Rathbun said.

People can do their part in lessening the wildfire risk by properly extinguishing campfires, barbecues and cigarettes.

An uptick in thunderstorms across the higher elevations during the latter part of the week can elevate the risk of lightning-induced wildfires.

"The good news is that winds are expected to remain rather light, which should limit the widespread growth of any fire that does ignite," Rathbun said.

However, the stagnant air can trap pollutants in the atmosphere during the heat wave, increasing the risk of poor air quality and respiratory issues for sensitive groups.

Download the free AccuWeather app to see how high temperature will climb in your community. Keep checking back for updates on AccuWeather.com and stay tuned to the AccuWeather Network on DirecTV, Frontier and Verizon Fios.