Desert locusts are swarming across parts of Africa, threatening food supplies. The U.N. has called for 'urgent efforts' to stop them from growing.

Unusually heavy rain is being cited as a factor in one of the worst outbreaks of desert locusts in decades across parts of East Africa and posing what officials say is an "unprecedented" threat to crops in third world countries, according to a recent report issued by the Food and Agricultural Organization of the United Nations (FAO).

The rare outbreak is destroying crops and pastures across eastern Ethiopia and neighboring areas of Somalia, parts of Sudan, Eritrea and northern Kenya as it risks spreading further due to the continuation of favorable ecological conditions for locust breeding until around June.

The report states that South Sudan and Uganda are not currently affected, but they are at risk for the species to eventually arrive.

"This has become a situation of international dimensions that threatens the food security of the entire subregion. FAO is activating fast-track mechanisms that will allow us to move swiftly to support governments in mounting a collective campaign to deal with this crisis," FAO Director-General QU Dongyu said in a statement earlier this week.

Dongyu said control efforts are underway, but due to the scale and urgency of the threat, additional financial backing is needed from international donors to help authorities.

"Communities in Eastern Africa have already been impacted by extended droughts, which have eroded their capacities to grow food and make a living. We need to help them get back on their feet, once the locusts are gone," Dongyu said.

The FAO says the devastating swarms potentially contain hundreds of millions of locusts and that the insects can travel distances of more than 90 miles in a single day. If left unchecked, the insect swarms could grow 500 times by June. 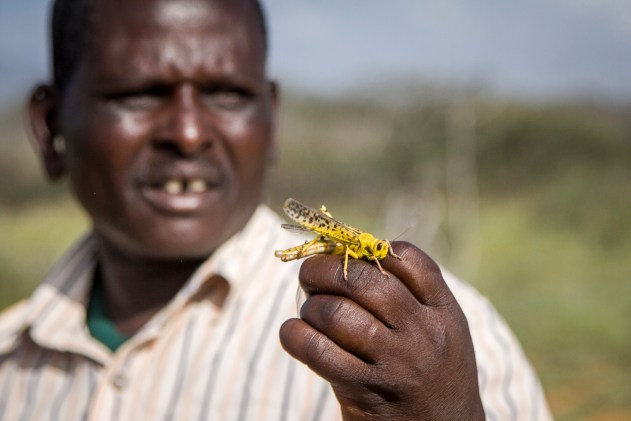 In this photo taken Thursday, Jan. 16, 2020, a Samburu man who works for a county disaster team identifying the location of the locusts, holds one on his hand near the village of Sissia, in Samburu county, Kenya. (AP Photo/Patrick Ngugi)

It's been 25 years since people in Kenya and Ethiopia have seen swarms of this magnitude and 70 years since Kenya last encountered such an invasion of locusts.

FAO officials warn that the locusts are rapidly heading toward Ethiopia's Rift Valley, known as the country's "breadbasket."

Some of the data sites AccuWeather meteorologists track suggest unusually high rainfall, which can create favorable breeding environments for the locusts, occurred on at least a few days in October to November.

"The climate across the affected areas [typically] varies from favorably moist, which supports forest or savanna, as well as crops in season, to desert, which is fit for limited grazing, as crops grow only where water is available," Andrews said, adding that the region hosts a rather diverse climate. 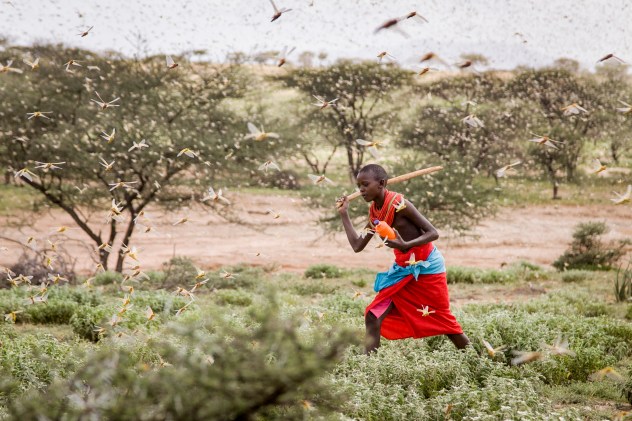 In this photo taken Thursday, Jan. 16, 2020, a Samburu boy uses a wooden stick to try to swat a swarm of desert locusts filling the air, as he herds his camel near the village of Sissia, in Samburu county, Kenya. The most serious outbreak of desert locusts in 25 years is spreading across East Africa and posing an unprecedented threat to food security in some of the world's most vulnerable countries, authorities say, with unusual climate conditions partly to blame. (AP Photo/Patrick Ngugi)

Andrews said the excessive rainfall could be related to the Indian Ocean Dipole, which set a record-high value during 2019.

The Indian Ocean Dipole, which is sometimes referred to as the "Indian Niño" because of its similarity to its Pacific equivalent, El Niño, and refers to the difference in sea-surface temperatures in opposite parts of the Indian Ocean.

According to Andrews, this dipole has been linked to unusual patterns of rainfall in other parts of the world, including in the Indian subcontinent, and it's one culprit behind Australia's severe drought and devastating fires.

One of the factors that worsened the situation was the heavy rain unleashed by deadly Cyclone Pawan in early December across Somalia.

"The already threatening situation was further exacerbated by limited operational capacities in Somalia and by heavy rains and floods from Cyclone Pawan that will allow at least one to two more generations of breeding, causing a substantial increase in locusts over the next six months," the FAO said in the report. 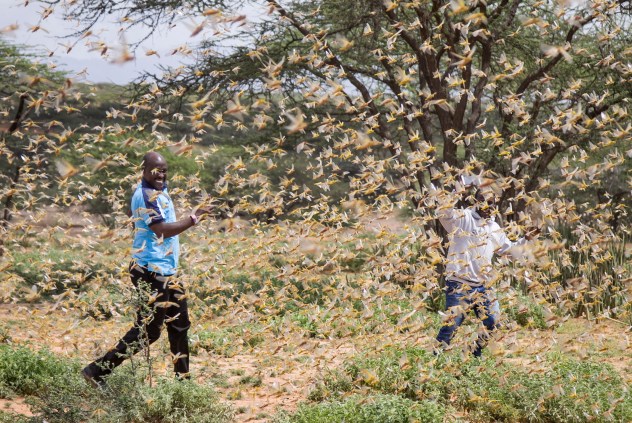 In this photo taken Thursday, Jan. 16, 2020, two Samburu men who work for a county disaster team identifying the location of the locusts, are surrounded by a swarm of desert locusts filling the air, near the village of Sissia, in Samburu county, Kenya. (AP Photo/Patrick Ngugi)

"In South-West Asia, intensive control operations were in progress along both sides of the Indo-Pakistan border where numerous swarms continued to form," the FAO said.

These swarms have been present in India, Iran and Pakistan since June 2019. Officials say recent rounds of heavy rain in Iran have allowed swarms to migrate to southern Iran to lay eggs, which could develop into a new swarm come springtime.

Weather relief in store for Southwest into late-January

When is the last time it snowed on Inauguration Day?

Temps plummet to 73 below zero in Siberia Mount Washington glows with an 'epic light' at sunrise Week to end with rounds of rain from Texas to Carolinas Eloise may strengthen into a dangerous storm Chilly pattern may be harbinger of bigger storm to come

Tiny corner of US has been isolated from mainland for 10 mon... Podcast: Looking ahead to Championship Sunday